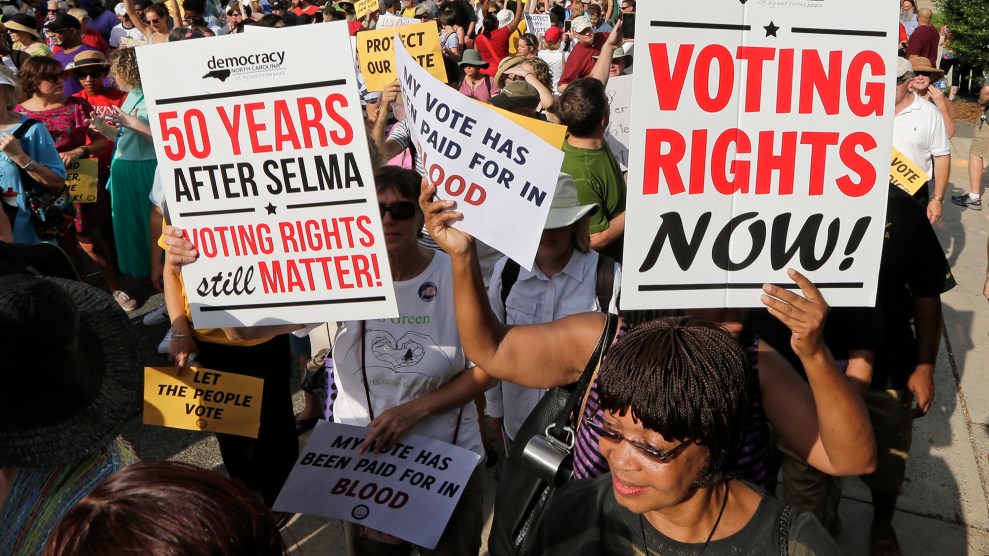 Demonstrators march through the streets of Winston-Salem, North Carolina, in July 2015, after the beginning of a federal voting rights trial challenging a 2013 state law. Chuck Burton/AP

In a bid to aggressively prosecute illegal voting, the Justice Department has sent sweeping subpoenas to 44 counties in North Carolina requesting all of their recent voting records. State election officials say the move will overwhelm their resources and prevent them from preparing for early and absentee voting for the November midterms. And civil rights advocates worry that eligible voters will be intimidated and deterred from voting as the administration amplifies its prosecutions of immigrants it says voted illegally.

One subpoena, sent to 44 county election boards last week, asks for “any and all poll books, e-poll books, voting records, and/or voter authorization documents, and executed official ballots (including absentee ballots)” from August 2013 to August 2018. Another subpoena asks the state board of elections for “all voter registration applications,” along with documents including absentee ballots and early voting forms, for every county in the state over the past eight years.

The timing and scope of the subpoenas, issued barely two months before the 2018 midterms, has alarmed election officials in North Carolina. “We are deeply concerned by the administrative drain on county boards of elections in order to comply with the extensive subpoenas immediately prior to a federal election, including the necessary reproduction of millions of documents (all ballots, etc.),” Joshua Lawson, the general counsel for the state board of elections, wrote to the Justice Department. “The subpoenas faxed to county boards are the most exhaustive on record. In our view, compliance with the subpoena as-written will materially affect the ability of county administrators to perform time-critical tasks ahead of absentee voting and early voting.”

The subpoenas are part of a broader effort to prosecute cases of illegal voting in North Carolina—and potentially nationwide—by President Donald Trump’s Justice Department and US Customs and Immigration Enforcement. Last month, the US Attorney for the Eastern District of North Carolina charged 19 foreign nationals with illegally voting in the 2016 presidential election. (“Fraudsters in Eastern, North Carolina Beware!” the Justice Department warned in a press release announcing the task force with ICE.) They were citizens of 14 different countries, and at least nine were legal permanent residents in the United States. According to HuffPost, several of the defendants cast ballots without realizing they were ineligible to vote. “It’s pretty crazy,” said one defendant, who requested anonymity after being arrested and handcuffed at their home. “I’ve never been in trouble with the law or anything.”

Civil rights groups say the fraud charges and new subpoenas could intimidate eligible voters, particularly immigrants, into staying home in November. They compared the request for the voting records to a June 2017 request by Trump’s now-defunct election integrity commission for sensitive voter data from all 50 states. “They couldn’t get it done that way so now they’re doing it this way,” said Allison Riggs, vice president of the Southern Coalition for Social Justice, a voting rights group based in Durham. “It’s a massive fishing expedition. The scope of it is stunning.”

Riggs said that handing over voting records from the past five years will distract county election boards from focusing on preparing for the midterms, including new efforts to prevent election systems from being hacked. “An administration that actively benefitted from foreign interference is now trying to sabotage efforts by North Carolina counties to make elections more secure,” she said.

It’s unclear whether the subpoenas are an isolated effort in North Carolina or part of a broader effort by the Trump administration to aggressively prosecute cases of illegal voting. But Justin Levitt, who oversaw the Justice Department’s Voting Section under President Barack Obama, said the amount of information requested in the subpoenas represented an “unbelievably inefficient way to go about conducting an investigation…Sending a massively broad subpoena like this right now is a significant burden on a local office.”

County election boards have until September 25 to respond to the subpoenas but can request an extension. The state board of elections is meeting Friday to discuss it.

Riggs said the indictments and corresponding subpoenas will be exploited by North Carolina Republicans, who have aggressively passed laws tightening access to the ballot. In November, voters in North Carolina will decide whether to approve a constitutional amendment requiring a photo ID to vote. A similar law was blocked by a federal court in 2016 for targeting African American voters “with almost surgical precision.” Many of the 44 counties targeted by the Justice Department have large African American populations.

“This will lead to voter suppression and intimidation,” said Riggs. “It’s sad it’s being launched in eastern North Carolina, which is heavily black, heavily rural, and heavily poor. Some of the most vulnerable voters are now at ground zero of this effort.”