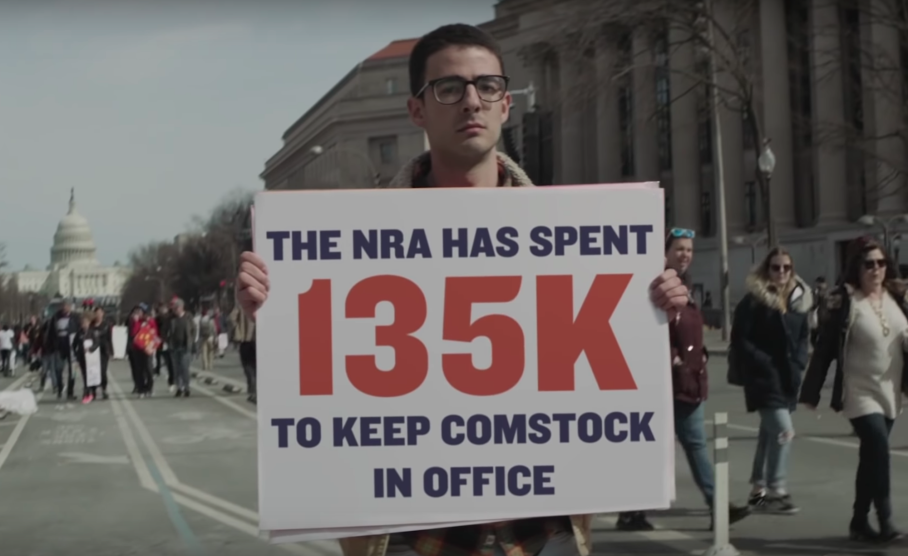 Since the February school shooting in Parkland, Florida, that ignited a national outcry for stricter gun laws, gun safety-aligned candidates and gun safety advocates have been hellbent on translating that outrage into the midterm turnout. Now, both national gun groups and the Democratic Congressional Campaign Committee—whose entire purpose is to turn the House blue—have announced massive advertising campaigns that seek to increase voter turnout for candidates committed to gun safety measures and hammer vulnerable Republican House members who have stood in the way of gun reform. The amount of money spent and this strategy highlights the group’s shared commitment to returning the House majority to the Democrats, a party likely to take up gun control measures if they are in control.

But perhaps the most remarkable allocation of resources comes from the Democratic Congressional Campaign Committee, which has weighed in with its very first gun control-focused advertisement. The TV ad targets Rep. Leonard Lance (N.J.), a Republican incumbent waging a tough reelection battle against former Obama administration official Tom Malinowski. Lance, as of late, has been one of the few GOP House members willing to take up any gun control measures. Earlier this year, he cosponsored legislation that would expand background checks and keep guns out of the hands of people who pose a risk to themselves or others. But the DCCC’s ad takes the long view of Lance’s record, highlighting his past pro-guns’ rights votes and “A” ratings from the NRA.

The DCCC’s attack on Lance exposes one of the few fault lines between the national Democrats and gun control groups. Organizations like Giffords, Everytown, and the Brady Campaign to Prevent Gun Violence have generally aligned themselves to support the same congressional candidates they think can restore Democratic rule to the House, something that would give gun control measures the chance to succeed. Lance’s Democratic opponent, Malinowski, has voiced support for the gun safety movement’s aims. But Giffords endorsed Lance this cycle and contributed $2,000 to his campaign last December, citing his co-sponsorship of a bill to ban bump stocks—appliances that turn guns into automatic weapons—in the aftermath of the 2017 Las Vegas massacre, and his vote against legislation that would have made it easier for at-risk veterans to buy firearms. (Even so, the group has not announced any substantial financial commitment to his race.)

The new advertisements fit a pattern of increased pro-gun control advertising exhibited across the field of Democratic candidates this cycle. According to an analysis from USA Today, both parties’ candidates have run twice as many ads that support gun control than opposing it. The trend reverses the 2016 election cycle, when gun rights’ advertisements outranked gun control ones by a ratio of nearly three-to-one. And the spending is likely to continue: Both Giffords and Everytown spent more than eight figures apiece during the 2016 general election.