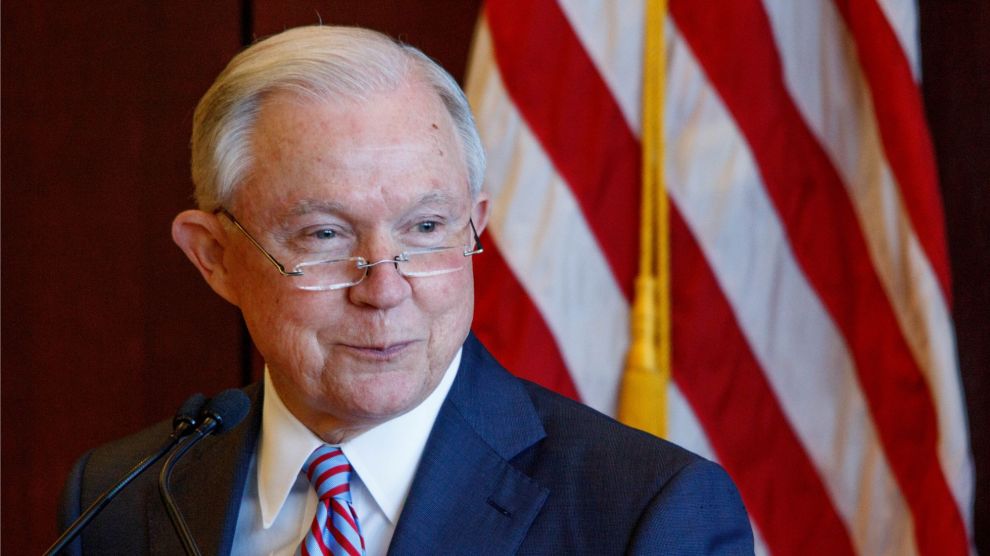 Over the past few months, Attorney General Jeff Sessions has faced fierce criticism for his role in the Trump administration’s family separation policy. But while the White House continues to deal with the fallout from tearing kids away from their parents at the border, Sessions has been busy orchestrating another, much quieter attack on the country’s immigration system.

Tensions have been simmering for months between the attorney general and the hundreds of judges overseeing immigration courts, but they reached a new high in July. The flashpoint was the case of Reynaldo Castro-Tum, a Guatemalan man who was scheduled to appear in a Philadelphia immigration court but had repeatedly failed to turn up. The judge, Steven Morley, wanted to determine whether Castro-Tum had received adequate notice, and rescheduled a hearing for late July. But instead of waiting for that appointment, the Justice Department sent a new judge from Virginia to take over the case. Judge Deepali Nadkarni subsequently ordered Castro-Tum deported.

The move sparked immediate outcry: The National Association of Immigration Judges (NAIJ), a union representing about 350 immigration judges, filed a formal grievance, and 15 retired immigration judges released a public statement condemning the action. “Such interference with judicial independence is unacceptable,” they wrote.

This was just the latest of many accusations that Sessions and his Justice Department were interfering with judicial independence in immigration courts. Since the beginning of the year, the attorney general has severely limited judges’ ability to manage their cases, increased pressure on judges to close cases quickly, and dramatically reshaped how America determines whom it will shelter. While Sessions isn’t the first attorney general to exercise these powers, immigration advocates say he’s using his authority in unprecedented ways and, as a result, severely limiting due process rights for migrants.

Unlike most courts, immigration courts are housed within the executive branch, meaning immigration judges are actually DOJ employees. Sessions is therefore ultimately in charge of hiring judges, evaluating their performance, and even firing them. He can also refer cases to himself and overrule previous judges’ decisions, setting precedents that effectively reshape immigration law. In a little more than six months, Sessions has issued four consequential decisions on immigration cases he referred to himself, in some instances overturning decades of legal precedent. Attorneys general under the Obama administration used that power only four times over eight years.

Sessions’ changes have been “extremely demoralizing,” says Dana Leigh Marks, president emeritus of NAIJ. “I’ve been in the field for 40 years, and I have never seen morale among immigration judges so low.”

Here are the biggest ways Sessions is attacking the immigration courts:

It’s now much more difficult to apply for asylum

In June, Sessions overturned a decision granting asylum to a Salvadoran woman, known in court documents as A-B-, who had escaped an abusive husband. Sessions used the case as an opportunity to declare that migrants can’t generally be given asylum based on claims of domestic abuse or gang violence—a catastrophic blow to the tens of thousands of Central American migrants fleeing these dangers.

Sessions’ decision, though, doesn’t just affect how judges can rule. US Citizenship and Immigration Services, the agency that helps process asylum cases, interpreted his decision to mean that survivors of domestic and gang violence usually won’t pass their initial “credible fear” interviews after they cross the border—a first step that determines whether asylum seekers are even allowed to make their case before a judge. As Mother Jones’ Noah Lanard has reported, immigration lawyers say they’ve seen “overwhelming” numbers of migrants denied at the credible fear interview stage since Sessions’ decision.

In a statement, a group of former immigration judges described this decision as “an affront to the rule of law,” pointing out that it challenges longstanding protections for survivors of gender-based violence. “Women and children will die as a result of these policies,” Michelle Brané, director of the Migrant Rights and Justice program at the Women’s Refugee Commission, told Mother Jones when the decision was first announced.

A group of asylum seekers is now suing Sessions in federal court, arguing that this new policy violates due process rights and contradicts existing immigration law. They say the policy’s sweeping generalizations ignore the requirement that each case be heard on its own merits.

Making matters even more complicated, in another decision earlier this year, Sessions vacated a 2014 precedent that guaranteed asylum applicants have the right to a full hearing before a judge can decide on their case. “The implications of [the new decision] are tremendous,” says Karen Musalo, director of the Center for Gender and Refugee Studies at the University of California-Hastings College of Law and one of the lawyers representing A-B- and the asylum seekers suing Sessions. “It’s basically saying that a judge can decide a case on the papers alone and not allow an individual the right to present their case in front of that judge.”

Judges have less control over their case loads…

This summer wasn’t the first time Castro-Tum’s case drew national attention. Judge Morley had “administratively closed” the case back in 2016—a common step judges have used to set aside thousands of cases, oftentimes when immigrants had no criminal background or had been here for many years and had family ties to the United States. Though the cases weren’t technically closed, they were put on hold and typically never reopened, usually so judges could focus on higher priority cases.

Earlier this year, Sessions reopened Castro-Tum’s case by referring it to himself, and used it to severely restrict when judges could use administrative closure. That sent the case back to Morley, which is how the DOJ ended up replacing the judge and sparking widespread outrage.

The judges union has said administrative closure is an important and necessary tool for judges to manage their caseloads, and removing it would result in an “enormous increase” in a court backlog that’s already piling up with almost 750,000 cases. Sessions’ decision also noted that cases which had previously been administratively closed, such as Castro-Tum’s, could now be reopened, potentially adding thousands more cases to the backlog and creating further uncertainty for the defendants.

…and will have to move through them more quickly

In a somewhat related move, in April, Sessions and the Justice Department announced new performance metrics for judges. According to a DOJ memo, judges would now need to complete at least 700 cases a year, as well as close cases within a certain time period, in order to receive a satisfactory performance review. If they fail to receive satisfactory marks, judges could potentially lose their jobs or be relocated. According to the memo, judges currently complete an average of 678 cases a year. The new measures will go into effect October 1.

The judges union, legal scholars, and other associations have strongly criticized the move, noting that case quotas would place enormous pressure on judges to quickly complete cases and affect their ability to fully hear cases—likely leading to more deportations.

“A tough asylum case takes about three to four hours to complete, but they’re pushing judges to schedule three or four cases a day, which is probably twice as many as most judges could do and do a good job on…It’s basically inviting people to cut corners,” says Paul Schmidt, a retired immigration judge who has been a vocal critic of the Trump administration. “[Sessions] is dumbing down the judges and treating them like assembly line workers whose only job is to stamp out final orders of removal.”

It’s harder for them to reschedule cases

On August 16, Sessions limited the ability for judges to issue continuances, which they did to postpone or reschedule removal cases, often when a defendant was waiting for a visa or another kind of immigration benefit and needed time to resolve their pending applications. Sessions has determined judges can now only issue continuances under a “good cause” standard, such as when an immigrant is likely to succeed in their attempt to stay in the United States, either by winning an asylum hearing or receiving a visa.

Several retired immigration judges sent a letter to Sessions the next day, calling his decision on continuances a “blow to judicial independence.” They noted that some judges may receive 10 to 15 requests for continuances a day—and would now need to spend time writing decisions on them, in addition to hearing their cases. “Immigration Judges should be treated as judges, and should be afforded the independent judgment that their position requires, including the basic power to control and prioritize their own case dockets,” the retired judges wrote. Advocates have also expressed concerns that immigrants could now be deported while waiting for another immigration benefit that would have given them legal status.

And as more judges retire, Sessions gets to staff up

Marks, of the judges union, notes there’s been a “tsunami” of retirements over the past two years. “Members of the association are telling us [that] they are leaving at the earliest possible opportunity or choosing to leave now because of the actions of the current administration,” she says. “They do not feel supported. They do not feel that they are free to make the decisions they need to make.”

Given the retirements, Sessions will have the ability to reshape the courts even further: Since January 2017, the DOJ has sworn in 82 new immigration judges and plans to hire at least 75 more this fall. Sessions has also worked to cut down the time it takes to hire judges.

What’s more, the Justice Department has faced allegations of politicized hiring. In April, House Democrats sent a letter to Sessions expressing concern the DOJ had blocked several judges’ appointments for ideological reasons. The DOJ said in a statement to CNN that it “does not discriminate potential hires on the basis of political affiliation.”

Finally, while the DOJ has a long history of hiring judges with immigration enforcement backgrounds, the judges union has expressed concern the DOJ may now be “over-emphasizing litigation experience” in its hiring practices, and “created even more skewed appointment practices that largely have favored individuals with law enforcement experience over individuals with more varied and diverse backgrounds.” As of last year, a little over 40 percent of immigration judges previously worked at the Department of Homeland Security.

Schmidt, the retired immigration judge, says he’s worried even more new judges will come from prosecutorial backgrounds. “Who would really want to work for Sessions given his record, his public statements?” he asks.

Under Sessions, he says, the immigration court “has become a deportation railway.”