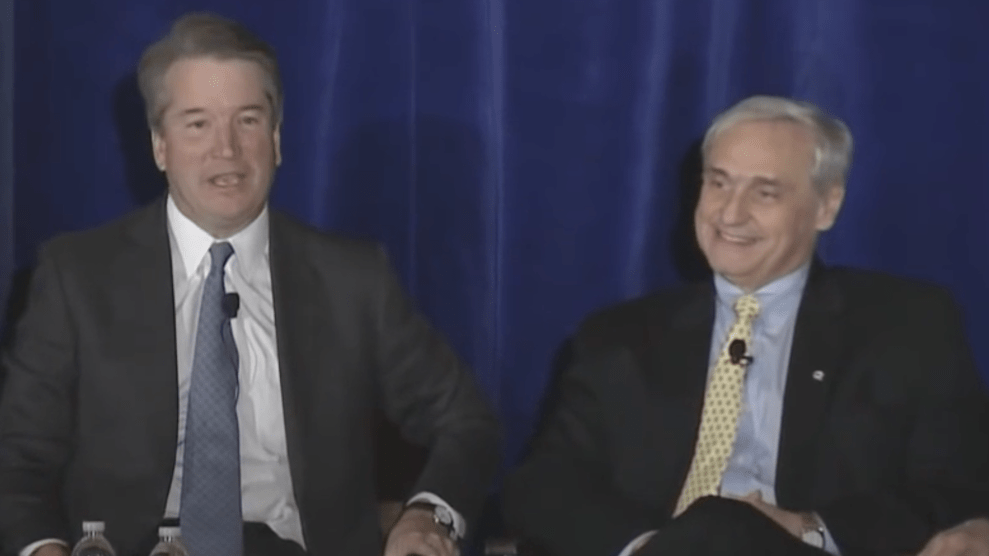 As DC Circuit Court Judge Brett Kavanaugh comes before the Senate Judiciary Committee this week for his Supreme Court confirmation hearings, he is entering a very different climate from any nominee before him. In less than a year, the country has undergone a profound shift in the way it views sexual harassment in the workplace. Even the committee he’s appearing before has been directly affected: Missing from the panel is Al Franken, the former Minnesota senator who last year aggressively sparred with Trump’s first Supreme Court nominee, Neil Gorsuch, but was forced to resign this year over allegations of sexual misconduct.

The current climate could make things awkward for Kavanaugh, who has close ties to a disgraced former judge accused of repeated sexual misconduct. The #MeToo movement, catalyzed by the revelations about Hollywood mogul Harvey Weinstein last October, is likely to put issues of sexual harassment front and center in Kavanaugh’s confirmation hearing, even though he has not personally been publicly accused of harassment. Since January, Sen. Mazie Hirono (D-Hawaii) has asked every single judicial nominee coming before the committee, under oath, whether he or she has ever engaged in sexual misconduct on the job or elsewhere. She plans to ask Kavanaugh, too.

As part of this inquiry, Democrats on the Senate Judiciary Committee are also likely to zoom in on Kavanaugh’s relationship with former 9th Circuit Court of Appeals Judge Alex Kozinski. Kozinski retired in December after at least 15 women, many of them his former clerks, accused him of sexual misconduct. “By their own telling, Judge Kozinski and Brett Kavanaugh have a close relationship,” Sen. Dianne Feinstein (D-Calif.), the top Democrat on the Judiciary Committee, told Politico recently.

The question for the Judiciary Committee is whether Kavanaugh was aware of Kozinski’s treatment of women, and if so, why he didn’t do anything about it. The White House has said Kavanaugh didn’t know anything about the allegations of sexual harassment by Kozinski until they appeared publicly in national media. Members of the Judiciary Committee are likely to treat this assertion with some skepticism, because while the specific allegations against Kozinski only became public last year, he has thrown up red flags for decades. As Dahlia Lithwick, a former 9th Circuit clerk, wrote in Slate last year, “Everybody knew.”

Much of the alleged behavior that prompted Kozinski’s retirement was done in plain sight, with witnesses. For instance, a law student alleged that Kozinski had fondled her breast at a school reception. Leah Litman, a law professor at the University of California-Irvine, told the Washington Post that Kozinski had pinched her leg under the table at a dinner event and joked to her and others there, including another Irvine law professor who confirmed the story, that he had just had sex with his wife and that they should be “happy to know it still works.”

Emily Murphy, a former clerk for a different judge on the 9th Circuit, told the Post that Kozinski had told her in front of a group of people that she ought to work out naked. (In response to the allegations raised in the Washington Post story, Kozinski said through his lawyer, “Many of the things that are being said about me are simply not true, but I deeply regret that my unusual sense of humor caused offense or made anyone uncomfortable. I have always treated my male and female law clerks the same.” )

Until his downfall, Kozinski was often portrayed as a colorful judge, a rarity on the bench, and he was a media hound. The now-defunct Legal Affairs magazine put him on its cover in 2004 and described him as “bawdy.” For years, he maintained an email group called the Easy Rider Gag List, which he used to circulate raunchy jokes to friends and associates. Here’s one example from the Los Angeles Times, which revealed the list’s existence in 2008:

The most graphic joke was set up as a three-page letter ostensibly written by a man to his estranged wife. The man sarcastically tells his wife that he still loves and misses her while at the same time detailing his recent sexual escapades with a young student, a single mother and his wife’s younger sister. The single mom, the man says, acts like “a real woman…[who is] not hung up about God and her career and whether the kids can hear us.”

Whether Kavanaugh was a member of the email group is likely to come up at his hearing, and the White House has acknowledged that he’s prepared to answer questions about it.

Kozinski frequently bragged that he was the only federal judge ever to have appeared on The Dating Game. He didn’t mention that he forcibly kissed a woman on the show:

Director of the Administrative Office of the US Courts L. Ralph Mecham told the New York Times that Kozinski was “advocating his passionate views that judges are free, undetected, to download pornography and Napster music on government computers in federal court buildings on government time even though some of the downloading may constitute felonies.” He also said Kozinski had shown “great interest in keeping pornography available to judges.” Kozinski was able to turn the incident into a political crusade over privacy rights, and Mecham was forced to back down.

Five years later, when Kavanaugh was nominated for his seat on the DC Circuit, Kozinski introduced him at the confirmation hearing.

In 2008, Kozinski became embroiled in another scandal when a litigant in an obscenity case Kozinski was overseeing told the Los Angeles Times that the judge’s personal website provided public access to a trove of obscene and pornographic images that Kozinski kept on a private server. For instance, there was a photo of naked women on all fours painted to look like cows and a graphic instructional image of a woman shaving her pubic hair. From the Times:

Kozinski ended up recusing himself from the obscenity case and declaring a mistrial as a result of the revelation. The whole debacle was covered extensively in the press. Shortly afterward, Mecham, who was by then retired, filed an official complaint about Kozinski’s conduct back in 2001. He wrote a letter to the chairman of the Judicial Conference Committee on Judicial Conduct and Disability, noting, “When Chief Justice William Rehnquist learned of Kozinski’s actions and then learned that he was boasting in public about his deliberate violation of Federal law he said ‘Tell Alex to watch pornography at home and not download and watch it in the courts.’”

After the Los Angeles Times story broke, Kozinski asked the 9th Circuit to conduct an ethics investigation into his conduct. Chief Justice John Roberts Jr. transferred the case to the 3rd Circuit. In 2009, that court found that “the Judge’s possession of sexually explicit offensive material combined with his carelessness in failing to safeguard his sphere of privacy was judicially imprudent.” But Kozinski was not disciplined.

The repeated allegations about Kozinski’s behavior were dismissed by his fans as signs that he was simply an iconoclast, a refreshing nonconformist. Last year, however, the allegations grew more serious. One of the women who came forward to accuse him of sexual harassment, a former clerk named Heidi Bond, who now writes romance novels under the pen name Courtney Milan, alleged that when she worked for Kozinski, he invited her into his office and showed her porn on his computer at least three times and asked if it turned her on. “When this happened, I felt like a prey animal—as if I had to make myself small,” she wrote on her author website.

She has recently weighed in on the Kavanaugh nomination, tweeting that it’s simply “unfathomable” that Kozinski’s closest associates weren’t aware of Kozinski’s alleged conduct toward women. She added, “And Kavanaugh was a very close associate.”