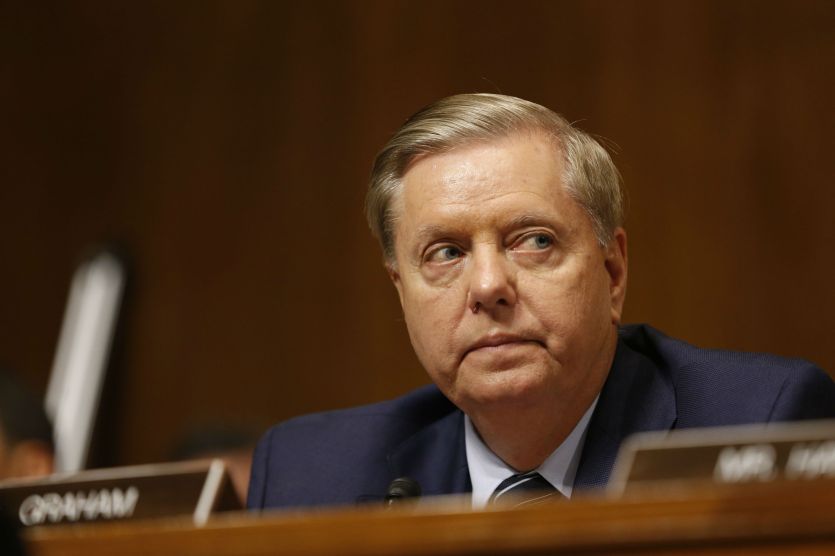 “Let me tell you my Democratic friends,” Graham said, “if this is the new norm, you better watch out for your nominees.”

During a break in Ford’s testimony, Graham spoke to a gaggle of reporters in the Senate. In response to a question about whether he thought some of his Republican colleagues might vote against Kavanaugh’s confirmation to the Supreme Court following Ford’s testimony, Graham said angrily that his colleagues should be highly skeptical of Ford’s accusations. He then warned Democrats that if Kavanaugh’s nomination fails, Republicans will create false accusations of sexual assault against Democrats’ future Supreme Court nominees.

“To my Republican colleagues,” he said, “if you can ignore everything in this record, look at an allegation that’s 35 years old, that’s uncertain in time, place, date, and no corroboration—if that’s enough for you, God help us all as Republicans. Because this happens to us. It never happens to them.”

Sen. Graham warns Democrats: “If this is the new norm, you better watch out for your nominees” pic.twitter.com/p9NIryUl7Y

Minutes later, reporters tweeted about an interaction Graham had in a Senate elevator with a woman who told him she was a rape victim. Graham responded with a curt “I’m sorry” and told her to go to police.

I was there for this —> https://t.co/JPetLytCcx

In recent days, Graham has repeatedly voiced doubts about Ford’s account. On Fox News on Sunday, he asked, “What am I supposed to do? Go ahead and ruin this guy’s life based on an accusation?” Graham added he thought Ford was being “used” as a political pawn. “This accusation is 36 years old. I don’t know when it happened or where it happened. And all the people who have been named say it didn’t happen.”

Last week, he was also criticized for saying to a Washington Post reporter of Ford, who has a doctorate and is a college professor, “I’ll listen to the lady, but we’re going to bring this to a close.”