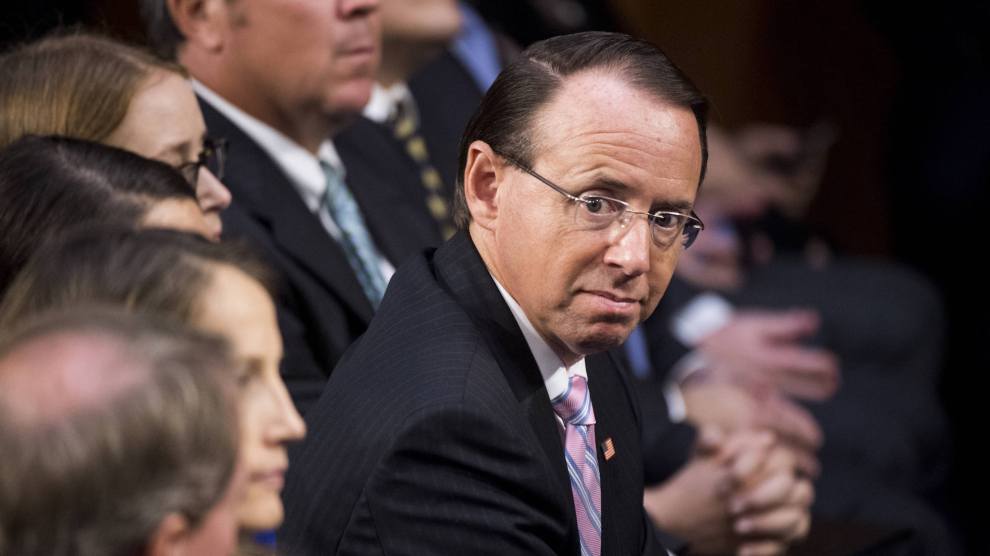 Deputy Attorney General Rod Rosenstein in the audience during the confirmation hearing of Brett Kavanaugh to be Associate Justice of the Supreme Court on Sept. 4, 2018. Bill Clark/Congressional Quarterly/Newscom via ZUMA Press

The stunning report said that Rosenstein’s proposals, which appeared to go nowhere, reflected his “conflicted, regretful and emotional” reaction to Trump’s decision to fire FBI Director James Comey shortly after Rosenstein assumed his position. His concerns about the president’s fitness came amid disclosures the Trump had pressed Comey to pledge loyalty and pressured him to end an FBI investigation into fired National Security Advisor Michael Flynn.

The Times reported that Rosenstein was angry at Trump and embarrassed after the White House used a memo he wrote criticizing Comey’s job performance as a public justification for Comey’s ouster.

The report immediately raised concern that Trump will use the news to fire Rosenstein. Trump and his congressional allies were reportedly already eyeing ways to oust Rosenstein and Attorney General Jeff Sessions after the midterm congressional elections, in a bid to tighten control of the Justice Department. Firing Rosenstein could help Trump’s effort to shut down or restrict Special Counsel Robert Mueller’s investigation into links between the Trump campaign and Russia, even as the probe and related investigations appear to be circling uncomfortably close to Trump.

“The New York Times’s story is inaccurate and factually incorrect,” Rosenstein said in a statement Friday. “I will not further comment on a story based on anonymous sources who are obviously biased against the Department and are advancing their own personal agenda. But let me be clear about this: Based on my personal dealings with the president, there is no basis to invoke the 25th Amendment.”

The Times report was based on the accounts of unidentified officials who described Rosenstein’s comments and “on memos written by F.B.I. officials, including Andrew McCabe, then the acting bureau director, that documented Mr. Rosenstein’s actions and comments.” McCabe was fired earlier this year. Though an inspector general’s report faulted him for misrepresenting his actions in authorizing the release of information to the media, his firing came amid pressure by President Trump for McCabe’s ouster over his role in the bureau’s decision to launch an investigation into Trump’s Russia ties.

In a statement Friday, a lawyer for McCabe said his client “drafted memos to memorialize significant discussions he had with high level officials and preserved them so he would have an accurate, contemporaneous record of those discussions. When he was interviewed by the Special Counsel more than a year ago, he gave all of his memos—classified and unclassified— to the Special Counsel’s office. A set of those memos remained at the FBI at the time of his departure in late January 2018. He has no knowledge of how any member of the media obtained those memos.”