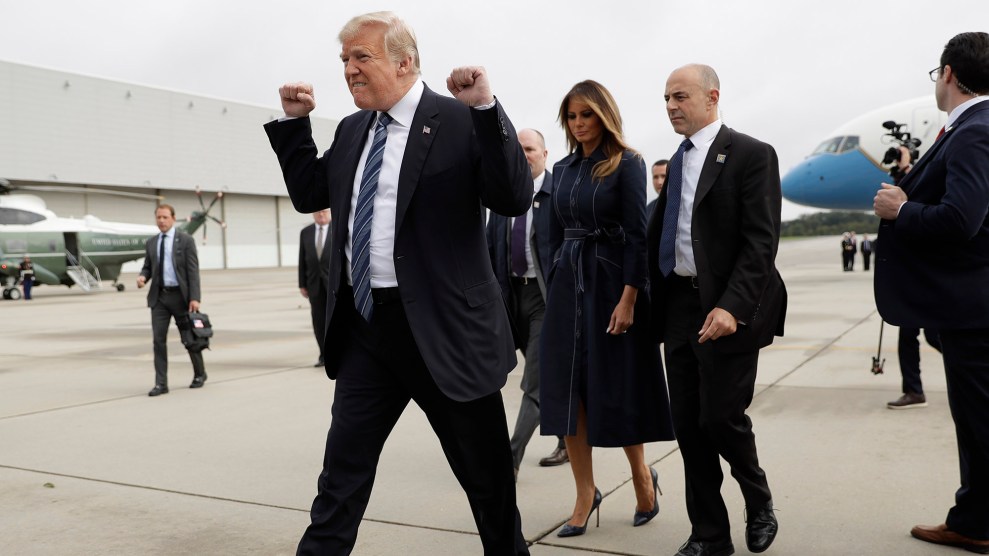 It was 7 a.m., and a pang of hunger in his belly woke the president. But was it hunger, or was it fire? The president couldn’t be sure. No matter. What was more important was that Fox News, and its sister channel the Fox Business Network, would help him find his bearings.

He liked what he heard. He liked what he saw. The conservative pundits understood him. They were real, and they, too, were mad. They were mad at the very same things that enraged him, that haunted him—the undeniable frustrating realities whose importance the liberal media refused to acknowledge.

It was 7:08 and time for him to get down to the serious work of being POTUS.

“We have found nothing to show collusion between President Trump & Russia, absolutely zero, but every day we get more documentation showing collusion between the FBI & DOJ, the Hillary campaign, foreign spies & Russians, incredible.” @SaraCarterDC @LouDobbs

He admired his tweet as it collected likes and retweets. Hillary and Obama couldn’t get those retweets. He stared at the tweet, enjoying every tick of the counters, every pixel of the screen.

It was September 11, 2018. Seventeen years since that awful day. He remembered it well. People said he didn’t remember it well, but people are stupid. Such a sad day. If only the Twin Towers had had asbestos.

He wanted to watch the stats on the tweet climb, but he had more important things to do. He went back to watching Fox News.

They were talking about the FBI and the media.

This morning he was a thousand miles from Trump Tower and Mar-a-Lago, but with the familiar fury as his companion, the White House almost felt like home.

From his earliest days in New York, the story had always been the same. They don’t think I can do it. But now it was worse. Since the moment that he descended the escalator in 2015 and announced his run for president, the narrative had switched. They think they can stop me.

As the most powerful man on the planet, he wasn’t alone anymore. He had shown the doubters! He had shown the critics! And he had earned the love of millions in the process. The millions who voted him into office. The millions who were watching the same news network he was watching that morning. He had an army. He had an actual army, but he also had an “army.” It wasn’t me against the world anymore.

New Strzok-Page texts reveal “Media Leak Strategy.” @FoxNews So terrible, and NOTHING is being done at DOJ or FBI – but the world is watching, and they get it completely.

The only people who didn’t get it were Democrats and their boosters in the media. Or they probably were just pretending not to get his power and his popularity. He knew that in their hearts they saw it all, but just pretended not to. And they have a very specific reason for this pretense: They are determined to deny him his successes, his greatness. Mueller, Russia, Access Hollywood, Stormy Daniels, it was all just a way for them to avoid confronting their own sad loss in 2016. He won the Electoral College, which is almost impossible for a Republican to do. Look at the map, clowns!

The Democrats never look at the map. When the twin morons Schumer and Pelosi would visit the Oval Office, he’d show them the map, and they would look but not see what they were looking at. They didn’t get what it meant. He was the president! He won! They lost. You snooze you lose. Take a snooze, Democrats! But they wouldn’t. They fought him every inch of the way.

At least they did it to his face. Not like the backstabbing Resistance wannabe in his administration writing that insane, loser op-ed. Undermining him at every turn. Sessions! What a weakling! Lou Dobbs was going on about the attorney general’s cowardice and the president couldn’t help but nod vigorously.

“ERIC Holder could be running the Justice Department right now and it would be behaving no differently than it is.” @LouDobbs

You know who did have his back? Rudy. Rudy Guiliani. America’s Mayor. Remember what he did on 9/11. What an awful day. September 11. He remembered it well. People said he didn’t remember it well, but people are stupid. He remembered it perfectly. He remembered how he tried to make lemons out of lemonade by announcing that he now had the tallest building in Lower Manhattan. He remembered how they disparaged him. Such a sad day.

Rudy Giuliani did a GREAT job as Mayor of NYC during the period of September 11th. His leadership, bravery and skill must never be forgotten. Rudy is a TRUE WARRIOR!

Despite all his hard work that morning, the president was up, dressed, and ready to kick ass and take names. He had something important to do. (Probably some boring briefing with boring old John Kelly.) He followed the aides as they led him toward the South Lawn and onto Marine One. Marine One was okay! It was a nice helicopter, but it wasn’t a nice nice helicopter. It was fine for little trips like this, to wherever he was going.

The helicopter began its ascent and he looked at his phone. He saw an aide had sent a tweet from his account.

It was a pretty good photo. He liked the photos more lately than he had when his presidency began. He wondered where they were going. He read the text of the tweet. Oh, right: 9/11. What a sad day. He remembered it well. People said he didn’t remember it well, but people are stupid. He was not stupid.

He looked out the window down onto the White House lawn. The crowd was cheering, waving. These were his people. He wasn’t alone, and he’d never be alone again. He leaned back in his chair and grinned.

When the chopper finally landed, the president was sure: It wasn’t hunger that he felt. It was fire.

Donald Trump fist pumped on his way to a 9/11 memorial service and it's not going over well https://t.co/fRiq477MSR pic.twitter.com/eXrZy3fSCj