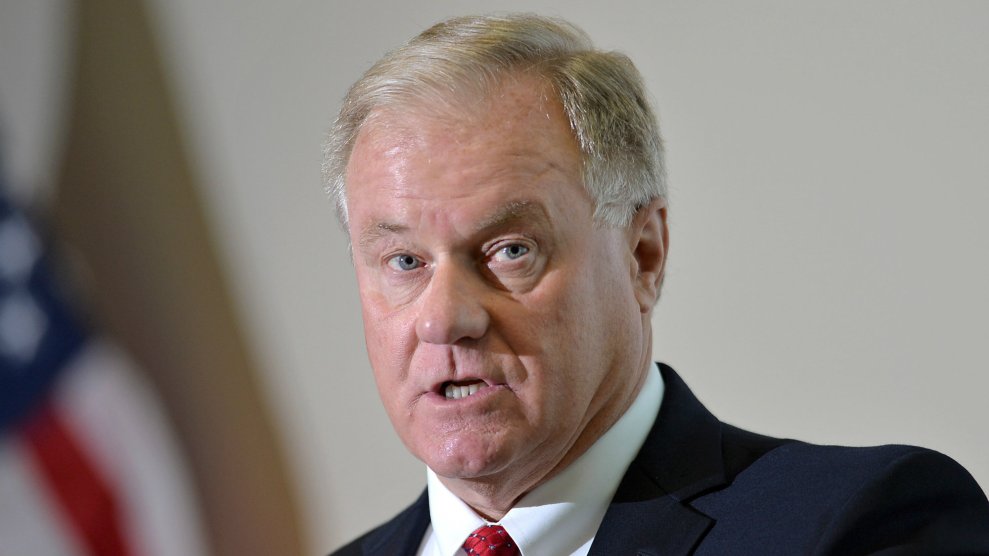 An Infowars post from early 2016 was revived on the campaign trail in Pennsylvania last week and, well, things got weird.

Republican candidate Scott Wagner, a former state senator, has not been shy about his affection for President Donald Trump as he aims to become governor in a state the president won. Like the president, Wagner began his career in private business—a trash collection firm rather than a real estate empire—and has paired a brash, “no apologies” style of campaigning with a populist appeal to Pennsylvanian workers. He also, naturally, has declined to release his tax returns.

Incredibly honored to have the support of @realDonaldTrump! I look forward to working with him to help Pennsylvanians keep more money in their paychecks and make sure the Commonwealth sees the benefits of the booming national economy.

But expressions of admiration took a bizarre turn last week during a campaign stop in Wilkes-Barre, a city in the northeastern part of the state. In an attempt to explain Trump’s appeal to the voters who earned him the presidency, Wagner borrowed from an allegory originally published in Infowars, the far-right outlet run by conspiracy monger—and persona non grata on Facebook and Twitter—Alex Jones.

Here’s a relevant portion of what Wagner said, as transcribed by PennLive, a Central Pennsylvania news site:

“You’ve been on vacation for weeks. You come home and your basement is infested with raccoons. Hundreds of rabid, messy, mean raccoons have overtaken your basement.

“You want them gone immediately. You call the city. You call four different exterminators, but nobody can handle the job. But there’s this one guy and he guarantees to get rid of them, so you hire him.

“You simply want the raccoons gone. You want the problem fixed, he’s the guy, he’s the best period. That’s the raccoon guy. Here’s why we want Trump. Yeah he’s got faults and I’m not going to read exactly what’s on here, but we really don’t care. This county is mess because politicians suck.

There’s a whole lot to unpack there.

The original Infowars article, which was attributed to an anonymous “80 year old American,” goes further in making a direct comparison to immigrants and refugees. “This country is weak, bankrupt, our enemies are making fun of us, we are being invaded by illegal aliens and bringing tens of thousands of Muslim refugees to America, while leaving Christians behind to be persecuted,” the piece states.

Wagner’s story seems to traffic in some of the derogatory rhetoric Republicans have used to describe undocumented immigrants in the past—”rats and roaches” being a prominent example, along with Trump’s infamous description of Mexicans as “vermin” who carry crime and drugs. Wagner also appeared to imply that his own long-shot candidacy was comparable to the president’s—and an exterminator’s. “You want the problem fixed, he’s the guy, he’s the best period.”

His speech quickly became fodder for Pennsylvania Democrats, including Democratic Gov. Tom Wolf. “As Election Approaches, Scott Wagner Embarrasses Himself in New (and Old) Ways,” read the headline for one email sent by Wolf’s campaign in the days after the incident.

In a statement, Wagner refused to apologize for his remarks and denied that the “raccoons” in question were a stand-in for any type of group or person.

“The story I read last week, to me, is an analogy that illustrates voters don’t really care what types of flaws their leaders have, as long as they are getting things done for the people they serve,” the statement read in part. “The raccoons do not represent any type of person—they represent the problems.”

Wagner has trailed Wolf by more than 10 percentage points in every major poll taken since March, but he commands the support of major Republicans, including Vice President Mike Pence, ex-White House strategist Steve Bannon, and Trump, who endorsed Wagner at a rally in August.

“He’s going to be one hell of a governor,” Trump said.