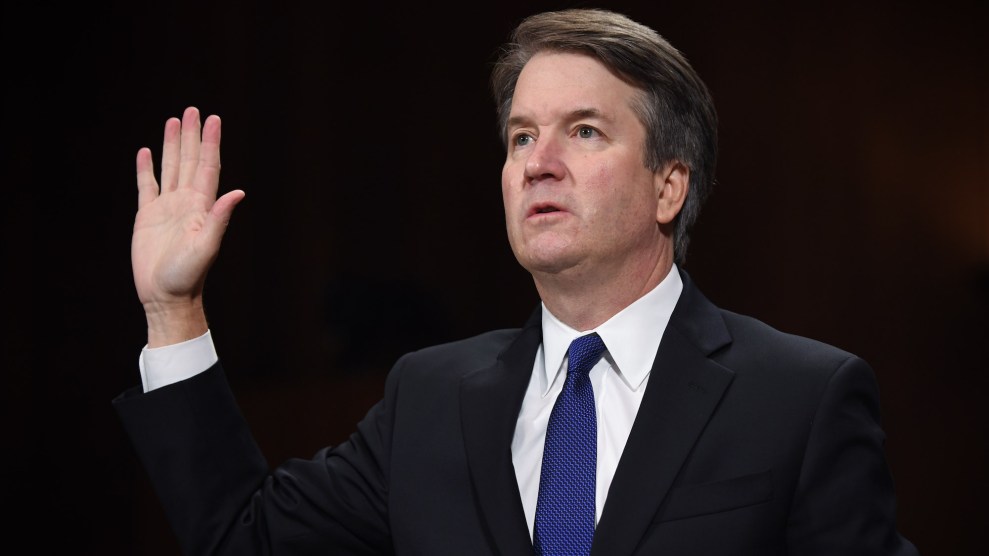 Fiercely defending himself against allegations of sexual misconduct Thursday before the Senate Judiciary Committee, Supreme Court nominee Brett Kavanaugh went so far as to claim he was the victim of a left-wing revenge plot. His remarks under oath could cause problems for him if he’s confirmed: Their partisan tone will raise questions about whether he should recuse himself from the myriad cases involving Democrats or progressive groups that will inevitably come before him. But there’s no mechanism for forcing a Supreme Court judge to recuse himself, so although it’s likely some cases will be perceived as tainted, there will be no obvious remedy.

“This whole two-week effort has been a calculated and orchestrated political hit, fueled with apparent pent-up anger about President Trump and the 2016 election,” Kavanaugh said Thursday. “Fear that has been unfairly stoked about my judicial record. Revenge on behalf of the Clintons. And millions of dollars in money from outside left-wing opposition groups.”

If he’s confirmed, Kavanaugh’s outburst against Democrats will likely embolden some people before the court—as well as third parties who offer friend-of-the-court briefs—to demand his recusal. “I think the bias he exhibited was so overt,” says Melanie Sloan, a senior adviser to the watchdog group American Oversight and a former Democratic staffer on the Senate Judiciary Committee. “There are a lot of times people think there is a bias in a judge, but rarely do we have a judge spell out their bias before a televised audience in the millions so there’s a transcript of it.” Sloan points out, for example, Kavanaugh will be in a position to rule on challenges to Trump administration regulations from environmental organizations that came out against his nomination, which he presumably lists among the “left-wing opposition groups” he railed against.

But because Kavanaugh is unlikely to recuse himself, any party that asks him to do so risks angering him and hurting its chances before the court. It’s a “tails you win, heads I lose” situation, Sloan says.

But should Kavanaugh fail to be confirmed and remain in his current job as a judge on the DC Circuit Court of Appeals, the situation changes slightly. On the circuit court, Kavanaugh would be bound by the Code of Judicial Conduct, which requires a judge to recuse himself if a reasonable person would doubt his ability to be impartial on a certain case, according to Matthew Menendez, an expert on judicial impartiality and independence at the Brennan Center for Justice. Unlike at the Supreme Court level, if a judge opts not to recuse himself, the parties can appeal that decision to the Supreme Court. Still, the Supreme Court justices, who are often friends with other judges, may be reluctant to force one of their fellow judges off a case.

Whichever court Kavanaugh is on, the specter of his remarks is likely to hang over the decisions he makes about liberal or Democratic groups or individuals. “I think when a nominee is seen as extremely partisan and potentially not impartial, that threatens the legitimacy of the courts as a whole,” Menendez says.