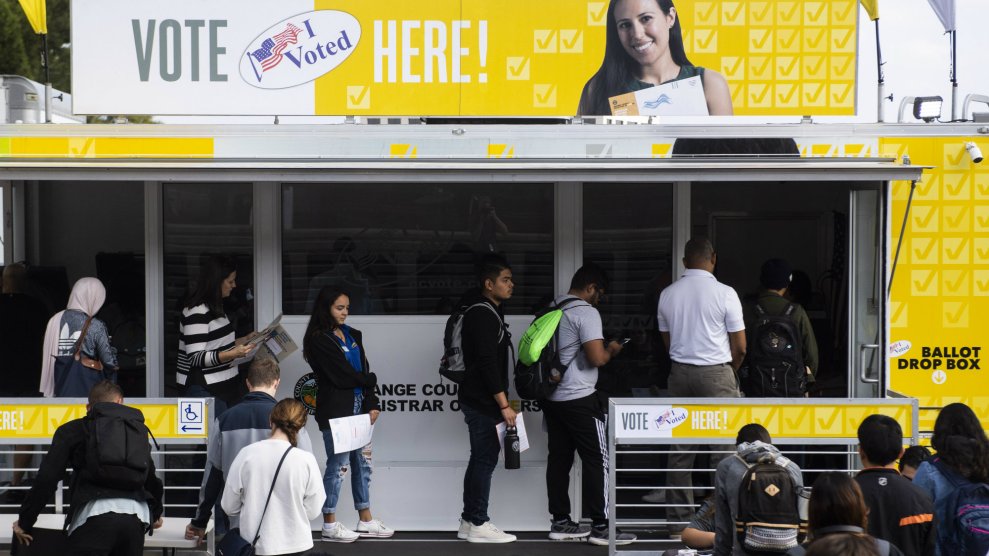 Abhi Agrawal had always been politically aware, but admits he was a “lazy liberal.” He voted in presidential elections, followed the news, and debated politics with his friends. But he had never voted in a single midterm.

“I wasn’t paying attention,” says Agrawal, a 36 year-old product manager in the suburbs of Washington, DC. Even as Republicans took control of statehouses, Agrawal believed the president and the judiciary could serve as a check on Congress, and that the country was, in general, moving forward.

But the 2016 election was a wake-up call. “The night Trump won was one of the most hopeless, scary nights of my life,” he says. “I promised myself that night that I will never skip an election again; that I will volunteer every single year; that I will advocate for those out of power.”

Now he tries to do anything he can to get involved: He donates, volunteers, knocks on doors for local campaigns, phone banks—he even tries to get his Uber drivers to register to vote. And he’s hopeful that his efforts—and his vote—will make a difference. “I know I’m just one person,” he says. “But I also know that there are thousands of people like me who are newly motivated.”

Back in September, we asked you whether this November would be your first time voting in the midterms—or, your first time voting ever. We wanted to know why you were headed to the polls, and whether there were any particular issues or candidates that energized you. We heard from many readers across the country who told us they wanted to see a check on the current administration, a change to the status quo, and, most importantly, have their voices heard.

Hear some of these voices on the Mother Jones Podcast. The segment begins at 13:00.

For many voters, the 2016 election was a major turning point: Steve Rapport, a martial arts instructor in San Francisco, California, had lived in the US for 25 years on a green card. But after protesting the travel ban last year, he finally decided to apply for citizenship.

“I thought: It’s time to put my money where my mouth is and to become a part of this democratic process,” Rapport, who became a citizen this February, tells Mother Jones. “A lot of people ask me why I would [become a citizen] now, and I say, ‘Now, is why I want to do it.’ It feels really important to stand up for something.”

Elizabeth Tucker, in Senoia, Georgia, told us that she registered to vote for the first time this year at the age of 57, and cast her first vote in the primaries this June. “Politics was never a part of my life—and I didn’t want it to be,” she says. “Personally, I’m neither Democrat or Republican, but I feel like I’m stuck in the middle of chaos, and I need to do whatever I can in my small way.”

“I have to vote because I have a very clear idea of the moral system that I want my society to be based on. I have to vote to make that society real.”

The midterms are also energizing our youngest voters, who are casting their ballots for the first time in a major election. “I really want to vote this election because of what’s happening in Texas,” says James Mayville, an 18-year-old college student in Dallas, Texas who supports Sen. Ted Cruz. “There’s so much on the line in terms of change and idealism.”

Grant Starr, an 18-year-old student from Gladstone, Oregon, says he found inspiration in the Parkland high school students, and started doing his own organizing around gun violence and prevention at a state-wide level with other young people. “I have to vote because I have a very clear idea of the moral system that I want my society to be based on, and the love that I want people to be treated with,” he says. “I have to vote to make that society real.”

And for some voters, getting to participate in this year’s midterm goes beyond what happens this November. Joy, who wanted to use only her first name, has spent the last several years in and out of homelessness, and has been struggling with alcohol addiction. With the help of a nonprofit called Spread the Vote, she was able to get an ID and vote for the first time in Atlanta, Georgia earlier this October. “I’m just riding a wave,” says Joy, 50. “It felt like I was participating as a full-fledged human being in this world.” She’s currently working towards getting a peer specialist certificate and hopes to help others with addiction and mental health issues. Now, armed with an ID, she says, “the possibilities are endless.”

Read more responses from our audience, which have been lightly edited for length and clarity.

“I have decided to vote during midterm elections because I am actively choosing to support the leadership in my local government and the voices of my state. I have always avoided politics because of the heated arguments and split sides, but it is my job to be an informed citizen. It is my right to vote and support my beliefs. It is my obligation as a United States citizen to stand behind the people I believe in. This is me deciding to make noise. I will not stop here, I will choose to make change. And I want others to come fight with me. Let’s start by voting.”— Kailee L. Cook, Lovettsville, Virginia

“This is the first time I’ve paid attention to the midterm elections. What inspired me? I realize that every single vote, mine included, will help purge the swamp out of Congress and stop the destruction of this country brought on by Trump since November 2016. My civic duty for the midterm election is just as important as the presidential one. I would like to make sure that my children and my grandchildren still have a safe and clean planet to live on, and a nation they can be proud of, long after my generation is gone.”— Yen Nguyen, Minneapolis, Minnesota

“My parents are immigrants and my brother is a part of the DACA [community]. When I hear candidates like Beto or others pushing for immigrants, that definitely motivates me, especially with what’s happening with DACA and [the Trump administration] trying to take it away. That motivated me to do more, to be more active, and not just be on the sidelines because the Hispanic/Latino vote is the sleeping giant, and we can turn the vote. We can make big changes.”— Brandon Calderon, Austin, Texas

“Voting has always been a big part of my family. Everybody I’ve ever known has really stressed how important voting is, especially my step mom. As I started getting more involved in social justice and learning the history of people of color, my ancestors and how voting was suppressed for them, that made it feel more important to me. That was a right that my ancestors fought for me to have—so it’s important that I use it.” — Isabella Baker, Albuquerque, New Mexico

“I am 21 years old and voted for Gary Johnson in 2016. What a mistake that was. At the time, I thought Hillary was a surefire thing, and I just wanted to get recognition for the third party. After the election, I felt stunned. I will be voting for any and all Dem candidates for these midterms because I cannot bear to see this country slip any further into embarrassment and shame. I really hope that people of Luzerne and Pennsylvania can really open their eyes, listen to what’s being said, and make the right choice. It’s not always about the left versus the right, it’s about all of us and we all need to make decisions that benefit everyone—not just because you want your politically-affiliated side to win.” — Anthony Baldiga, Pittston, Pennsylvania

“I wasn’t really involved in politics but now I realize all these issues connect to me directly. These elections are literally asking me what I want: ‘Do you want this proposition to pass? Do you want this person to win?’ I get to decide. I realize my vote matters because essentially I’m contributing to these decisions. I feel like it’s my job to help represent others because I am old enough to vote. I feel like I have to speak up about these issues. If I don’t do that then other people will make these decisions for me.“— Ashley Vasquez, Stockton, California

This article has been updated for clarity.