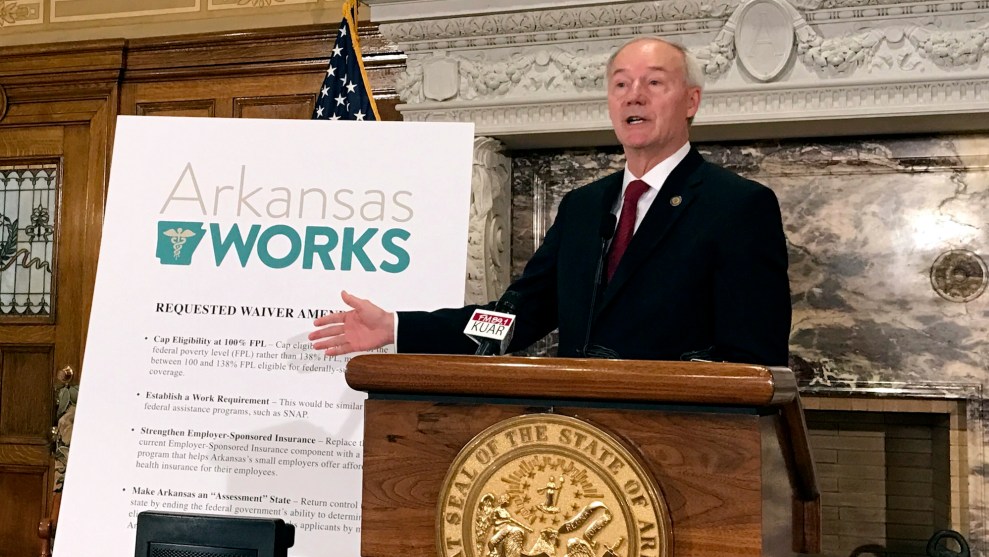 For the second month in a row, over 4,000 Medicaid beneficiaries lost their health insurance after failing to meet work requirements for the program. The newest numbers, released Monday in a state report, come on the heels of a purge of 4,353 individuals in September, bringing the total number of people who have lost coverage to 8,462 in Arkansas.

In June, Arkansas became the first state in the country to implement a work requirement for Medicaid recipients. The program, which requires non-exempt workers to log 80 hours of work or work-related activities a month in order to maintain coverage, quickly came under fire by health care advocates. In August, three advocacy groups, two of which were also involved in a lawsuit that got similar requirements thrown out in Kentucky, sued on behalf of three Arkansas Medicaid recipients in order to block the rule.

The number of people subjected to the work requirement has nearly tripled since June. Nearly one-sixth of the Arkansas residents covered under the Affordable Care Act’s expansion of Medicaid are now subject to the work requirements, which will go into full effect next year. According to the new law, beginning in January all enrollees ages 19-49 “must work or engage in specified educational, job training, or job search activities for at least 80 hours per month to remain covered,” unless otherwise exempted.

Before the new policy, Arkansas had been held up as a case study in expanding coverage to previously uncovered residents. Under the Affordable Care Act, the number of residents in the state without health insurance fell to 7.9 precent in 2017, nearly half of the 18 percent rate from 2013.  But in September, over 15,000 recipients were de-enrolled, including the 4,353 that did not meet work requirements. Other reasons why people lost their insurance included failure to return requested information to the state and increase in household income.

Arkansas is one of four states that received federal approval to implement work requirements—a policy that the federal government prohibited when Barack Obama was president, but has changed since Donald Trump took office. Eight other states have applied for work requirement waivers that are still pending before the Trump administration.