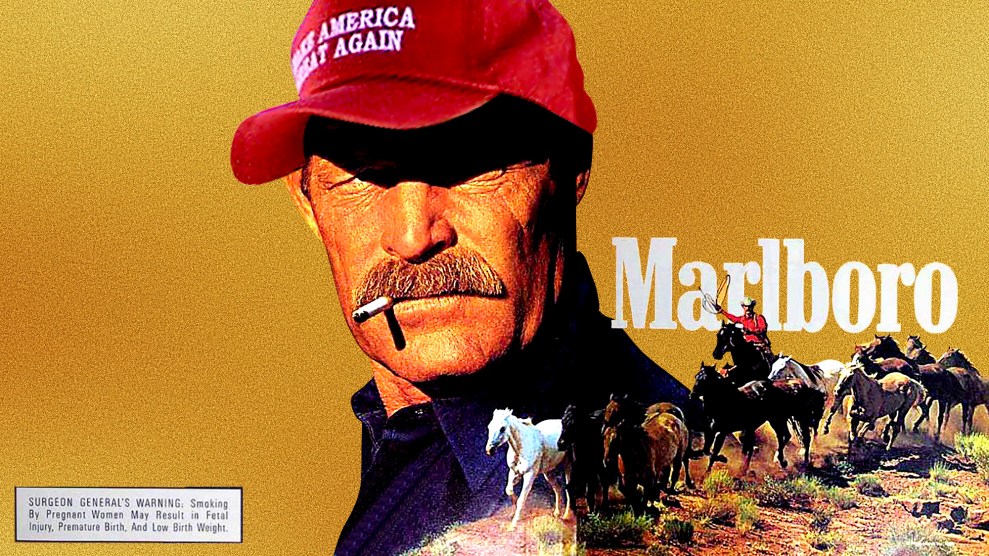 Big Tobacco has never really been known for truth in advertising. But as the midterm elections approach, industry heavyweights are throwing their resources behind a different kind of deceptive marketing campaign that could have serious consequences for public health. In Montana, tobacco companies are bankrolling an effort to defeat a ballot measure that would prevent roughly 100,000 people—fully 10 percent of the state’s population—from losing their health insurance next year.

“The idea that we should take away health care for about 100,000 Montanans—it’s pretty frightening.”

The ballot initiative in question, I-185, is pretty simple. It would increase taxes by $2 per pack of cigarettes, and introduce taxes on e-cigarettes. That money would be used to fund the state’s Medicaid expansion program and other services such as home care and veteran suicide prevention. So far, Altria (the renamed parent company of the US branch of Phillip Morris) has contributed more than $12 million to Montanans Against Tax Hikes, the main group opposing I-185. RAI Services (the parent company of RJ Reynolds) has also given the opposition group several hundred thousand dollars. In all, tobacco money accounts for at least 90 percent of the funds raised by the group.

“The tobacco tax is, in and of itself, good public health policy that we promote,” says Amanda Cahill, director of government relations at the American Heart Association/American Stroke Association in Montana, one of the organizations behind the ballot initiative. “And then, of course, we care about people having health care, and especially our vulnerable populations being covered and having access to preventative care. So the idea that we should take away health care for about 100,000 Montanans—it’s pretty frightening.”

Under the Affordable Care Act—better known as Obamacare—the federal government gave states the ability to greatly expand Medicaid coverage, offering it to anyone who makes up to 138 percent of the federal poverty line. But Republicans in 17 states have yet to implement the expansion, often citing the fact that beginning in 2020, states will have to pay for 10 percent of the costs, with the federal government covering the rest. As a result, millions of Americans have been left without insurance or have been forced to pay higher premiums. That’s sparked something of a backlash: Voters in Maine overwhelmingly backed a Medicaid expansion ballot initiative in 2017, and the residents of Idaho, Utah, and Nebraska will vote on similar measures in November.

Unlike those states, Montana has already expanded Medicaid under Obamacare. In 2015, Democrats and moderate Republicans in the state Legislature teamed up on the issue, but the deal they struck came with a catch: It would only last until June 2019. For expansion to continue after that, it would have to be re-approved with a dedicated funding source. Since 2015, the state Legislature has moved further to the right as moderate Republicans have left office, so I-185 could be make-or-break for Medicaid expansion in the state.

Expansion has proved to be a huge success in Montana. About 95,000 people are currently covered under the program, and the number is projected to increase to 101,000 by next year. That reality has aided backers of the ballot initiative, who don’t have to sell voters on an entirely new program, but instead just have to convince people to not take away insurance from their neighbors. A poll conducted in April on behalf of the campaign behind I-185 found that 69 percent of voters supported it, with just 19 percent opposed.

Gov. Steve Bullock, a Democrat, has endorsed the initiative, and appeared in a TV ad released last month to boost the campaign. “Big tobacco corporations are spending millions of out-of-state dollars misleading Montanans about efforts to protect our health care,” the governor said in the ad.

Montanans Against Tax Hikes hasn’t focused the bulk of its messaging on opposing the idea of Medicaid expansion, or even on tobacco policy. Instead, the group has engaged in some deceptive math to argue the ballot initiative doesn’t properly fund the Medicaid program. “It doesn’t add up,” an ad from the group argues, without mentioning the increase in tobacco taxes—or that the funds to run the ad came primarily from Altria.

The sources cited by the ad don’t agree with that assessment. The official state fiscal analysis of the ballot initiative from the governor’s budget office says I-185 would provide sufficient funds for Medicaid expansion. The fiscal analysis even says the ballot initiative will keep Medicaid expansion funded as the increase in tobacco taxes reduces cigarette consumption, from 42 million packs sold in the state in 2016 down to a projected 39.6 million in 2020.

“The tobacco lobby is incredibly influential in our legislature.”

Essentially, the Montanans Against Tax Hikes argument only looks at the money spent on Medicaid expansion, without taking into account the fact that the state saves money in other ways from expansion. Part of that comes from Montana shifting people off traditional Medicaid—which the federal government reimburses at a lower rate—and onto the Medicaid expansion program. A government report from last year found that the program had already saved the state more than $30 million, and a study from researchers at the University of Montana found that expansion adds about $350 to $400 million to the state economy each year.

Montanans Against Tax Hikes lists Charles Denowh as its treasurer. Denowh, former executive director of the Montana Republican Party, is also president of the Montana Group, a consulting firm that offers lobbying services and “grassroots advocacy.” The company has done campaign work for Montana Republicans such as former Rep. Ryan Zinke—now President Donald Trump’s Interior secretary—and US Sen. Steve Daines. According to the firm’s website, Denowh “has managed dozens of advocacy campaigns for corporate and non-profit organizations, as well as working on some of biggest political campaigns in the state.”

Altria, Montanans Against Tax Hikes, and the Montana Group did not respond to interview requests.

The state’s tobacco taxes have remained flat since 2004, when a ballot initiative increased them by $1 per pack of cigarettes. That initiative passed by a 26-point margin. Health groups in the state tried to raise those taxes again in recent years, but were stymied in the state Legislature. “The tobacco lobby is incredibly influential in our legislature,” says Kristin Page-Nei, Montana government relations director at the American Cancer Society Cancer Action Network, one of the groups behind the initiative. After those efforts failed, the groups decided on another ballot measure. The effort is primarily funded by the Montana Hospital Association, but it has also received a boost in signature collection from the Fairness Project, a national organization that has spearheaded the recent nationwide push to get Medicaid expansion on the ballot. The Fairness Project has spent about $130,000 in the state.

“We pay billions of dollars every year to treat illnesses caused by Big Tobacco,” says Jonathan Schleifer, executive director of the Fairness Project. “And so this initiative asks the multinational corporations that get rich off those illnesses to give a little back into the system, and frankly, they just don’t want to pay their fair share.”