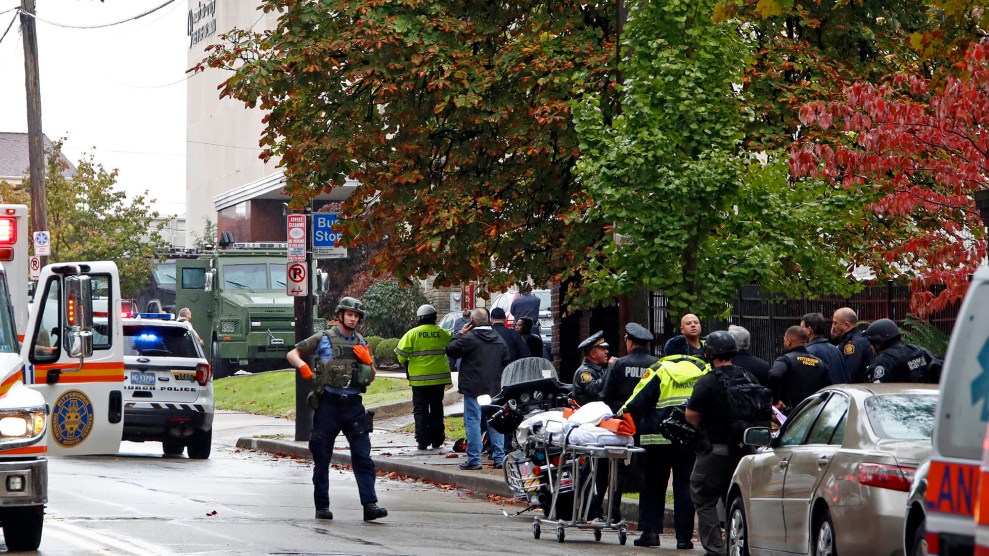 Update, 1:30 pm ET: In a press conference Saturday afternoon, Pittsburgh Public Safety Director Wendell Hissrich told reporters that the shooting has been characterized as a hate crime and that local officials have turned the investigation over to the FBI. There is no evidence of improvised explosive devices or additional threats to safety at the Tree of Life Synagogue. Hissirch confirmed that six people had been injured, including four police officers, but declined to give the number of fatalities or the name of the shooter. Media outlets are reporting that the suspect is named Robert Bowers.

At least eight people were killed and several others injured when a gunman opened fire during Saturday morning services at the Tree of Life Synagogue in Pittsburgh, Pennsylvania, according to Pittsburgh’s local CBS affiliate. The shooter, a white male, has surrendered and been taken into custody.

At least four police officers have been shot, according to Pittsburgh officials. Local military and SWAT teams reported to the scene. The shooter reportedly exchanged gunfire with officers and had been injured before being taken into custody.

CONFIRMED: One suspect in custody. Surrendere d to police. Being taken to Mercy Hospital. FBI has been notified of situation. (Per Councilman Corey O’Connor’s chief of staff. pic.twitter.com/ZlAJHNJBkj

Police sources have told Andy Sheehan, a reporter with Pittsburgh CBS affiliate KDKA, that the gunman entered the synagogue shouting “All Jews must die!”

“Police sources tell KDKA’s Andy Sheehan the gunman walked into the building and yelled, ‘All Jews Must die.’” https://t.co/4lEhVlKjYl

The synagogue is in Pittsburgh’s Squirrel Hill neighborhood, an area on the eastern side of the city with a large Jewish population. Three congregations use the space for their services. The synagogue was full for Sabbath services, which were scheduled from 9:45 a.m. to noon. Police received many calls from worshippers who were barricaded inside the synagogue during the attack.

President Trump, who is scheduled to appear on the campaign trail in Indianapolis and southern Illinois later today, tweeted that he was monitoring the situation. There’s no word yet if the president will change his travel plans.

This is a breaking news story. We will update this as more information becomes available.