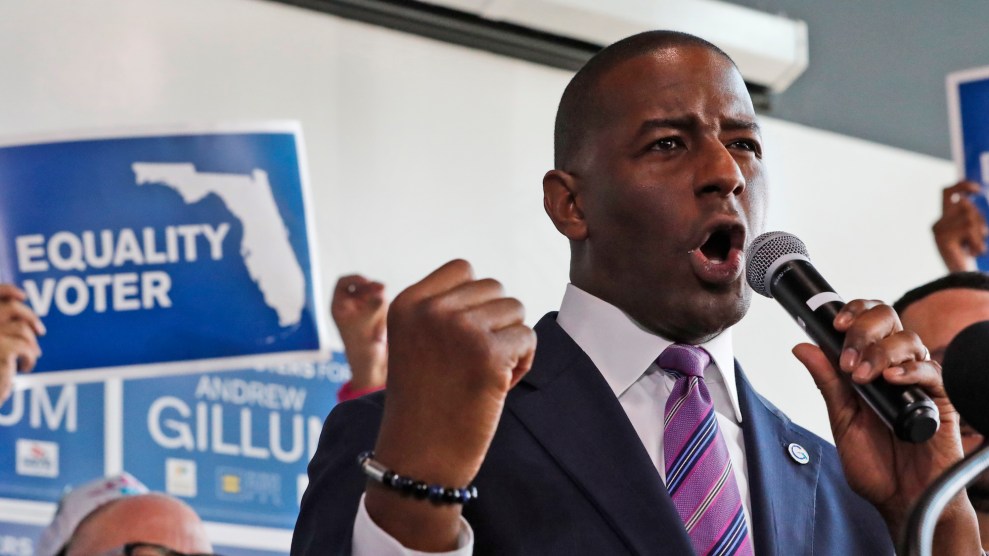 A conservative congressman is under fire after rolling out a new nickname for the Democratic candidate in Florida’s governor’s race. At a rally on Saturday for Republican Ron DeSantis, Rep. Matt Gaetz (R-Fla.) criticized crime rates in Tallahassee, where Democratic candidate Andrew Gillum is currently mayor. “Tallahassee is like the murder capital of Florida,” Gaetz yelled into the microphone in front of a small crowd in Cape Coral, Florida. “I don’t know whether to call him Andrew Gillum or Andrew Kill-em.”

If elected, Gillum would be Florida’s first black governor. In August, DeSantis, a former congressman, warned voters not to “monkey this up” by voting for Gillum, a statement many saw as racist.

Florida Democrats were quick to fire back at the latest comments. Terrie Rizzo, the chair of the state’s Democratic Party, called Gaetz’s language “racist and despicable.” St. Petersburg Mayor Rick Kriseman said the name-calling was “just another instance of unacceptable language being weaponized by the DeSantis campaign’s top surrogates.” And Sean Shaw, the Democratic candidate for attorney general, responded by comparing DeSantis to Donald Trump, according to Florida Politics.

Gaetz—a freshman congressman with a reputation for inflammatory stunts, including inviting notorious right-wing troll Charles Johnson to the State of the Union in January—doubled down on Twitter.

Democrats can’t defend the horrific crime rate under Andrew Gillum in Tallahassee so they blame others. Sad! https://t.co/3rf4da2Nrn https://t.co/CPDyQJP1uz

State Rep. Kionne McGhee tweeted that Gaetz sounded like he was calling for Gillum’s assassination, and challenged Gaetz to back up his claim about Tallahassee’s murder rate.

Congressman @mattgaetz – cite your source for your murder reference. Make sure it’s says Tallahassee is # 1 in Homicides in Florida. I’m waiting https://t.co/QgPzrT91c0

According to the Tallahassee Democrat, crime rates in Tallahassee’s Leon County were the highest in the state in 2017, ranking first in property crime and fifth in violent crime. Yet under Gillum, the rate decreased by 15 percent during 2016, more than twice as much as in the rest of the state. DeSantis has increasingly taken aim at Gillum’s record on crime. In one speech, he claimed that “Andrew Gillum cannot keep communities safe. It’s part of his ideology.”

Chris King, Gillum’s running mate, responded on Sunday. “Our election should and must be about real people facing real issues, and not hyperbolic propaganda used to fearmonger and gin up their base,” King told Florida Politics. “It’s time for DeSantis and his allies to end the name-calling and divisiveness and start treating Florida voters with respect.”