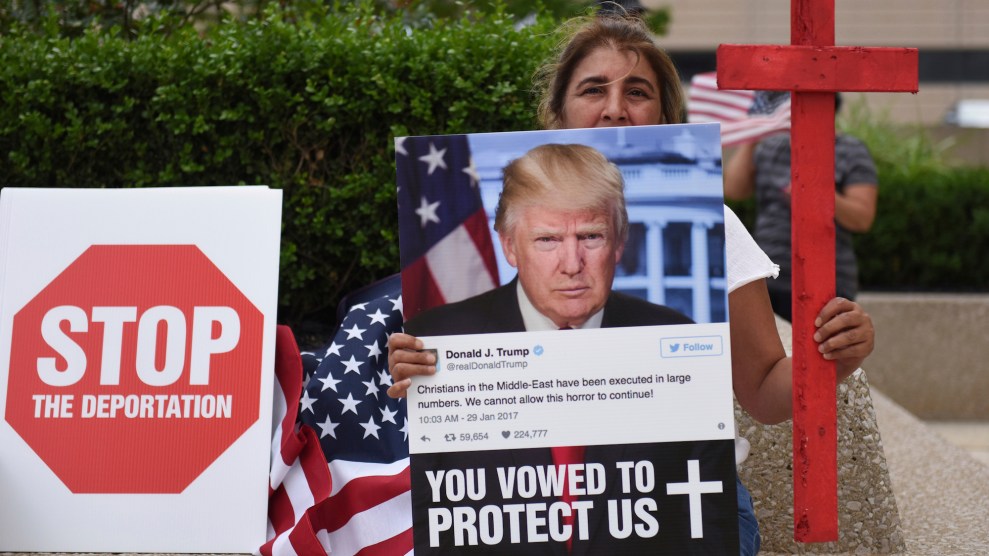 Amal Hana protests in June 2017 in Detroit after a family member was detained by Immigration and Customs Enforcement in a operation targeting Iraqis with deportation orders, including many Chaldean Catholics.Tanya Moutzalias/AP

Before Donald Trump became president, Iraqis facing deportation lived in limbo. The US government had ordered them removed—sometimes decades ago—but Iraq refused to take them. So Iraqis like Usama “Sam” Hamama, who came to the United States as four-year-old in 1974 and received a deportation order 24 years ago, continued on with their American lives.

In the spring of 2017, their lives were upended when US Immigration and Customs Enforcement began rounding up Iraqis with deportation orders, after the Trump administration said Iraq had agreed to accept deportees. In theory, ICE was now free to detain the Iraqis without violating a 2001 Supreme Court decision that blocks immigrants from being jailed indefinitely when their home countries refuse to accept them. There was one problem: Newly unsealed court documents show that there wasn’t actually an agreement with Iraq.

Hundreds of pages of internal emails, memos, and handwritten meeting notes reveal that the Department of Homeland Security aggressively pushed Iraq to accept deportees against their will. With few exceptions, Iraq resisted those efforts and stuck to its policy of not taking deportees unless they volunteered to be returned to Iraq. Throughout those negotiations, ICE officials misled a federal judge by claiming there was an agreement with Iraq that allowed ICE to deport detained Iraqis.

“The government has been caught red-handed providing false information to a federal judge,” says Miriam Aukerman, a senior staff attorney with the American Civil Liberties Union of Michigan, which has fought to get the Iraqi detainees released. The deception shaped Judge Mark Goldsmith’s January decision to allow ICE to continue detaining more than 100 Iraqis. If ICE hadn’t hidden key facts, Aukerman says, it is “very likely” they would been released earlier this year.

“That’s the real consequence of these lies,” she says. “For more than a hundred people—for more than a hundred families—they’ve lost 2018 as a consequence of the government’s misconduct.” Others have lost even more. More than three dozen Iraqis have given up after enduring months of detention and accepted voluntary deportation to Iraq, where they are at risk of being persecuted or killed. On Wednesday, the ACLU argued in court that in light of the new evidence, the administration should be forced to release Iraqi detainees and strike ICE officials’ false and misleading statements from court records. Khaalid Walls, an ICE spokesman, says in an email that as “a matter of policy, ICE does not comment on pending litigation.”

Iraq remains a dangerous place for deportees. Daniel Smith, an Iraq researcher who has been living in the country since 2007, said in a court declaration that Iraqis who return after years abroad often have “extreme difficulty reintegrating” and face “suspicion as a result, leading to violence, arrest, extended detention, and being targeted by armed militias.” The State Department’s website warns, “Do not travel to Iraq due to terrorism and armed conflict.”

“The government has been caught red-handed providing false information to a federal judge,” says Miriam Aukerman, an ACLU attorney.

Many of the Iraqis arrested by ICE are Chaldean Catholics living in the Detroit area, like Sam Hamama. During the 2016 campaign, Trump earned Chaldeans’ support by pledging to destroy ISIS for “hunting down and exterminating” Christians. After the arrests began, their hope turned to panic. Balsam Kinaia, a member of the Detroit Chaldean community, told Mother Jones last June that Chaldeans at risk of deportation would be better off getting killed in the United States because “at least they could be buried here.” (Most of the Iraqis with deportation orders have criminal records, according to ICE.)

The story of the government’s alleged agreement with Iraq begins in January 2017, when Trump banned nationals of Iraq and six other countries from entering the United States. In March, Iraq was removed from the list, and a senior DHS official said the removal was occurring in part because the country had agreed to accept deportees. Soon after, ICE deported eight Iraqis on a charter plane, and the agency stopped classifying Iraq as “uncooperative.” In May and June, ICE detained about 200 Iraqis in anticipation of a deportation flight scheduled for later that month. The ACLU sued to stop the seemingly imminent deportations, and Goldsmith quickly agreed to block them.

In court, the story the government told Goldsmith and the ACLU almost immediately diverged from what it knew to be true. John Schultz, an ICE official responsible for coordinating deportations to the Middle East, claimed in a July 20 court declaration that Iraq had agreed to accept charter flights of deported Iraqis under a “newly established relationship.” He said ICE estimated that canceling the June charter had cost the government more than $500,000 and added in a November declaration that Goldsmith’s order had caused the cancellation. (The Justice Department successfully blocked the ACLU’s efforts to verify ICE’s claims.)

In January, Goldsmith declined to rule that Iraqis’ detention violated Zadvydas v. Davis, the 2001 Supreme Court ruling that blocked indefinite detention of immigrants who cannot be deported. Goldsmith cited Schultz’s statements about increased cooperation with Iraq as evidence for why the Iraqis could be deported, but he had his doubts and ordered the government to begin turning over documents about the alleged agreement.

Aukerman says she had a “jaw-dropping moment” when she received some of the early documents. Internal emails showed that Goldsmith had nothing to do with the $500,000 flight cancellation; Iraq’s prime minister had refused to allow the flight before the judge blocked the deportations. Then-ICE director Thomas Homan and a senior Department of Homeland Security official later called the Iraqi ambassador to pressure him to let the flight take place. The ambassador refused, prompting Schultz’s boss to write that ICE had “exhausted” all of its options and had not “even been able to get a new tentative date for the flight.”

Other documents released this week show that Iraq almost always stuck to its longstanding policy of blocking involuntary deportations. Before the ACLU took ICE to court, one letter shows, the Iraqi embassy declined to issue travel documents that would have allowed two dozen Iraqis to be deported. (One of the Iraqis was Hamama, whom an immigration judge released on a $100,000 bond earlier this year.) Iraq’s Washington consul wrote that an Iraqi national “should express orally and in writing his willingness to return to Iraq voluntarily in order to be issued a travel document.” Few Iraqis—some of whom were born in refugee camps and have never set foot in Iraq—wanted to leave the United States.

On July 20, 2017, the same day Schultz touted increased cooperation with Iraq in a court declaration, an ICE official sent Schultz documents that called for sanctioning Iraq for refusing to accept deportees. An internal memo stated that ICE considered Iraq to be “among the most recalcitrant countries” on deportation and that visa sanctions were the “only remaining avenue available to secure cooperation.” In August, Schultz told his staff to complete the sanctions package, which was never enacted.

The head of Iraq’s migration ministry made the voluntary return policy explicit in March 2018, writing in a letter to Iraq’s foreign minister that the “policy of our ministry, since it was established” is to “refuse the principle of forced return of Iraqis abroad or any other nationals, because it conflicts with humanitarian laws and principles.” Two months later, ICE and Iraqi officials in the United States allegedly tried to coerce detained Iraqis into signing forms indicating that they wanted to return to Iraq voluntarily. ICE reportedly told some of them that they would go to jail for five years if they didn’t sign. In June, Goldsmith issued an emergency order requiring ICE to post notices in detention centers stating that ICE cannot force detainees to say they want to go to Iraq.

If the government had gotten its way by stopping the ACLU from obtaining the documents, none of this information would have been revealed. “Delay, deny, deceive—in interchangeable order—that’s what has happened in this case,” Aukerman says. “All along.” She adds that the deceptive ICE declarations have also been used to deny bond to Iraqis in other cases. They “did not have what we did for the last nine months,” she says, “which was have a bunch of lawyers working full-time to basically prove these lies.” The ACLU is asking Goldsmith to remove ICE’s misleading statements from those cases as well.

Aukerman sees the lawsuit as just one example of how immigration detention remains the “Wild West of the Constitution,” an area where fundamental commitments to liberty and due process are ignored. Immigration detention is supposed to be about facilitating deportation, not punishment. Yet immigrants are often held in jails alongside convicted criminals. “It’s not about removing people,” Aukerman says. “That’s the legal fiction. The purpose is to break people’s spirits so that they will give up their rights and they will return to countries, as our clients do, where they face very, very severe harm.”