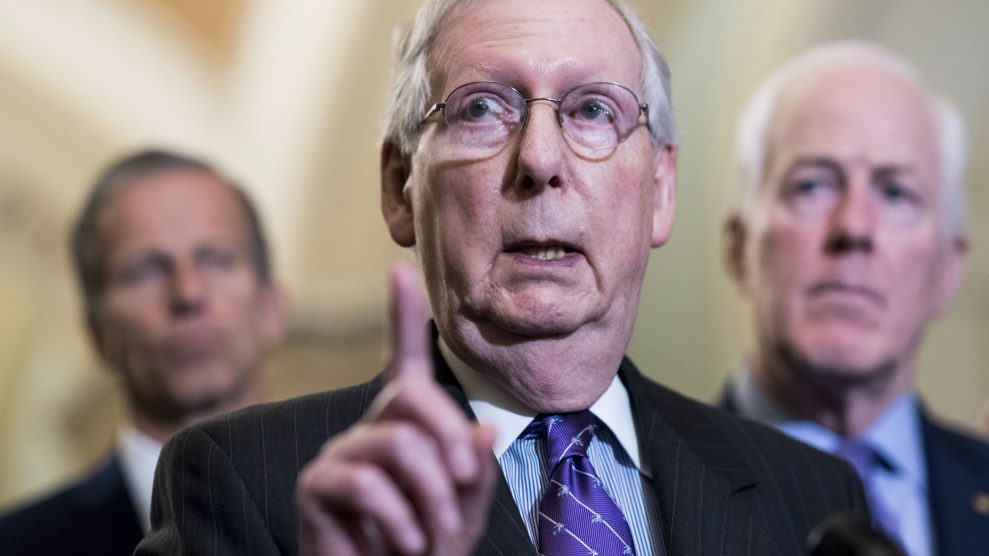 In advance of the Saturday’s Senate vote on Supreme Court nominee Brett Kavanaugh, Senate Majority Leader Mitch McConnell (R-Ky.) told the Washington Post he was grateful for the opposition to Kavanaugh from Democratic senators and protesters. “It’s been a great political gift for us. The tactics have energized our base,” he said, adding, “I want to thank the mob, because they’ve done the one thing we were having trouble doing, which was energizing our base.”

McConnell also said his faith in Kavanaugh never wavered: “When your integrity is attacked like his was, a withdrawal was certainly no solution to that, so we were in the fight to the finish.”

So far, the right has largely praised McConnell’s work in handling the Kavanaugh nomination. Steve Bannon told Axios reporter Jonathan Swan, in a text message Friday night, that “Senator McConnell showed real leadership and the rest of the Senators real spine. This should stand as a lesson for the future—when Republican band together, stand up for the grassroots and take the fight to the Democrats and the opposition party media, America wins.”

Jonah Goldberg, a conservative columnist for the Los Angeles Times, called McConnell an “institutional fighter” and “the kind of guy who swims across a moat with a knife in his mouth.”

.@JonahNRO: “Mitch McConnell, I think deserves an enormous amount of credit for doing this. He blocked Merrick Garland, when Barack Obama was still president.” pic.twitter.com/iXJ71LfRUJ