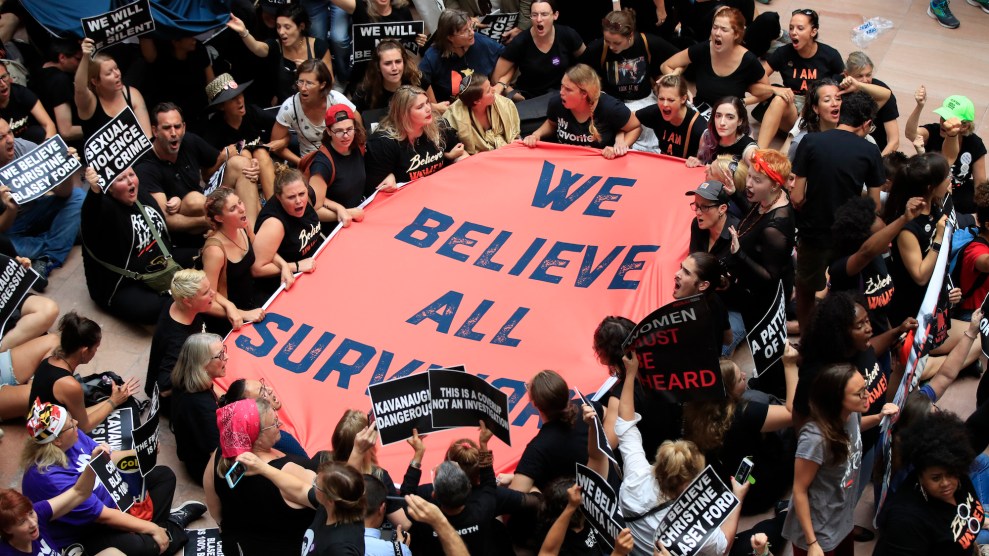 Two days before the Senate voted to confirm Brett Kavanaugh to the Supreme Court, a new “Moms for Kavanaugh” video warned that the allegations of sexual assault against him foreshadowed a dangerous new era—for men and boys.

“We are mothers,” the ad states over images of cooing babies, boys doing pushups, a young man proposing to a woman in a white dress as emotional piano music swells. “We give everything for our sons.” Then pounding drums cut in, followed by photos of short-haired women protesting Kavanaugh and the now-confirmed Supreme Court justice himself declaring that his life has been “totally and permanently destroyed.”

The ad was made by CatholicVote.org, a small political action group that stakes out conservative positions on the Affordable Care Act, illegal immigration, and “massive environmental regulation,” along with more predictable causes like same-sex marriage and abortion.

While many women say that they are concerned about false accusations of sexual assault and harassment, the ad’s premise—that a feminist inquisition is targeting innocent boys and men—falls apart in the face of evidence. Even in the age of #MeToo, sexual assaults are rarely reported to authorities, meaning that the vast majority of rapists will never be arrested, much less convicted. A number of studies conducted in the United States, Canada, Australia, and the United Kingdom show that when sexual assault is reported to law enforcement, somewhere between 2 to 8 percent of reports are false. And there’s no scientific basis for the notion that survivors might make accusations based on faulty memories or misidentification (as Republicans have suggested about Christine Blasey Ford).

And men number among the survivors. According to estimates compiled by the National Sexual Violence Resource Center, an estimated one in six boys is sexually abused by the time he turns 18. Nine percent of rape and sexual assault victims are men. Between 40 and 50 percent of gay and bisexual men report experiencing sexual violence other than rape.

After more than 15 years of investigations into the Catholic church’s child sex abuse scandal, the moms of CatholicVote.org have plenty of reasons to be concerned about their sons (and daughters). But while the organization has acknowledged credible accusations against priests, it has responded to the latest allegations against a powerful Catholic man by raising the specter of #MeToo hysteria.