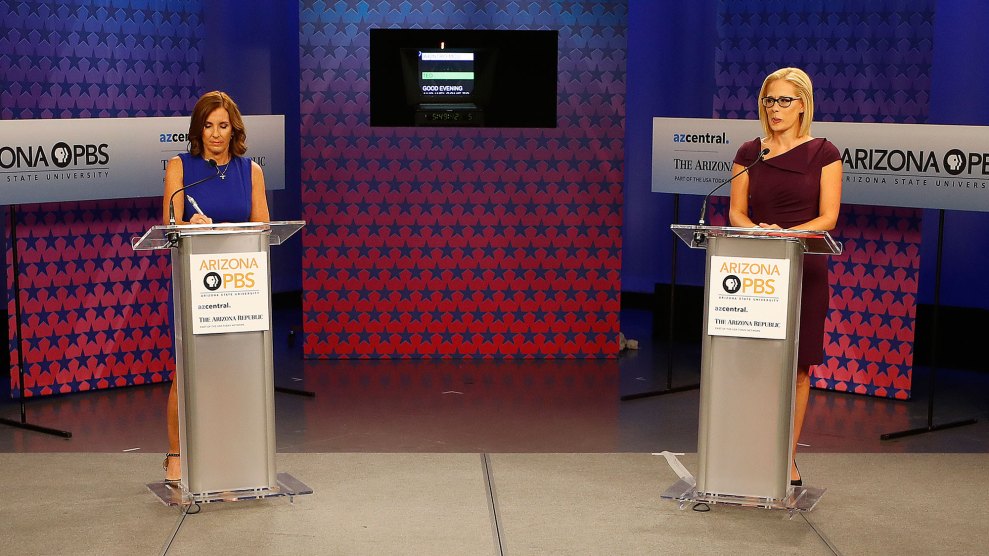 Monday’s Arizona Senate debate mostly did what it was supposed to do—it highlighted the core differences between two particularly cagey candidates locked in a tight race. Republican Rep. Martha McSally dodged the question of whether she voted for President Donald Trump but said she supports him now. She declined to say she’d make abortion a “litmus test” for Supreme Court judges but boasted of her strong pro-life record. Democratic Rep. Kyrsten Sinema said she was disappointed by “politicians in both parties” for their handling of the recent Supreme Court fight but eventually said she would have voted not to confirm Brett Kavanaugh to the bench. Both candidates want to convey there is a mile between them without ever conceding an inch.

But the most revealing moment came at the very end. A few days after the United Nations’ Intergovernmental Panel on Climate Change released a damning, bordering on apocalyptic, new report on climate change, the moderators asked both candidates a two-part question—did they believe climate change was man-made, and what would they do to combat the looming, climate-change-induced crisis of water scarcity in Arizona?

Sinema, the progressive-turned-centrist, answered the question. She agreed it was man-made and said she’d work with Sen. John Kyl (R-Ariz.) to “partner with states in the region” on a “regional strategy to move forward.” She did not offer any idea of what moving forward would look like, though the congresswoman said they would “do so without harming our business prospects.” Not exactly John Muir, but okay.

McSally, who last week told the Arizona Republic that “there is likely a human element to it” but opposed “crushing regulations” pushed by the Obama administration to mitigate climate change, chose to pivot from the issue entirely.

“I can’t believe this is the last question,” she said. “I mean we do have to address the issues of climate, and water is so important for Arizona, it’s our lifeline.” But, she said, “we have to talk about the military! We have to talk about our veterans! We haven’t had any opportunity!”

“You have it right now,” a moderator said.

So instead of talking about climate change, McSally attacked Sinema for protesting the wars in Iraq and Afghanistan in the early 2000s.

“When we were in harm’s way she was protesting our troops in a pink tutu,” said McSally, an Air Force veteran who flew an A-10 in Afghanistan. “And I’ll tell you what, if these are not disqualifying enough, Kyrsten, what came out last week, CNN reported that in 2003 when she was in radio you said it was okay for Americans to join the Taliban to fight against us. You said you had no problem with that. Kyrsten, I want to ask right now if you’re going to apologize to the veterans and me for saying it was okay to commit treason?”

Sinema did not. “Martha has chosen to run a campaign like the one you’re seeing right now,” she said. And it was on to closing statements.

Maybe McSally’s attack on Sinema will move the needle a little in a tight race, though it was 15 years ago and the CNN story was a lot more measured—Sinema maintains that she was brushing aside a radio host’s flippant remark about the Taliban in order to move the conversation in a different direction, which seems like a fair reading based on the context.

But it’s worth taking a step back to consider what just happened. Pressed on the single most urgent issue of modern times, an issue that is poised to make Arizona, like large portions of the rest of the planet, uninhabitable, McSally belittled the question and opted instead to attack her opponent, again, for opposing two disastrous wars—one that was waged on false pretenses, left hundreds of thousands of people dead, and created the vacuum filled by ISIS, and another that just turned 17 years old. If, a decade and a half later we’re still debating the wisdom of that, there’s really not a lot of hope we’ll solve anything else.