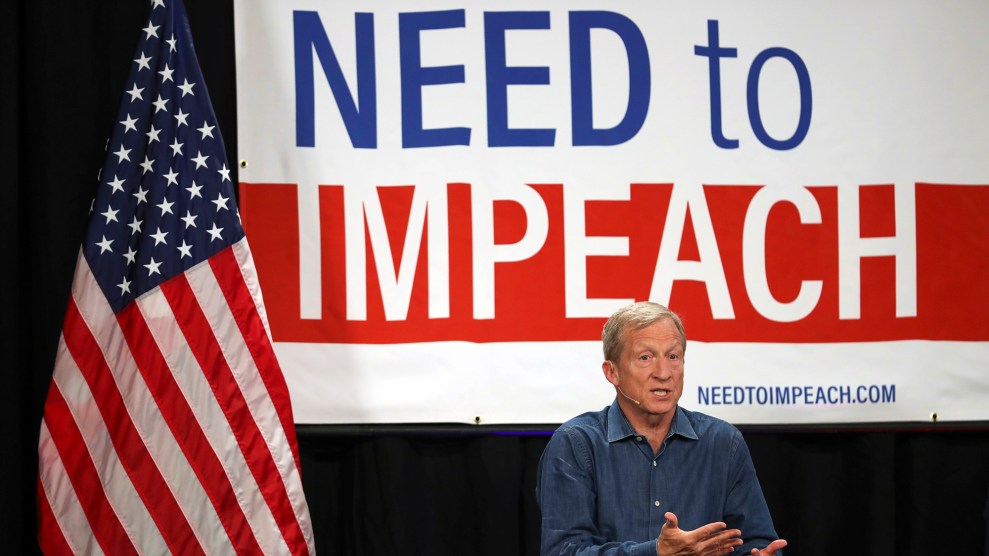 Tom Steyer at a Need to Impeach Town Hall, May 30, 2018, in Minneapolis, MN. Jeff Wheeler/Star Tribune via AP)

Just days after Tom Steyer, a prominent Democratic donor from California, received a bomb in the mail, President Donald Trump called him “a crazed & stumbling lunatic” on Twitter.

Just watched Wacky Tom Steyer, who I have not seen in action before, be interviewed by @jaketapper. He comes off as a crazed & stumbling lunatic who should be running out of money pretty soon. As bad as their field is, if he is running for President, the Dems will eat him alive!

“It is unthinkable that in the midst of the horrible political violence our president would resort to name-calling instead of repairing the damage to the fabric of our country,” Steyer responded on Twitter.

.@realdonaldtrump just tweeted at me in his typical insulting style after watching @CNNsotu. It is unthinkable that in the midst of the horrible political violence our president would resort to name-calling instead of repairing the damage to the fabric of our country.

Trump was reacting to an interview Steyer gave to CNN’s State of the Union on Sunday, where he said Trump and the Republican Party had created “an atmosphere” of “political violence.”

“If you look across the political scene, what you see is routine, systematic lawlessness,” Steyer said, following the deadly shooting in Pittsburgh. “An attempt to break small-d democratic norms in pursuit of victory at all costs.”

Billionaire Democratic donor @TomSteyer joins @jaketapper on #CNNSOTU to discuss the bomb sent to him by a Trump supporter, who also targeted prominent Democrats and CNN and what might be causing the hate and bigotry in America. https://t.co/ieNndoRvIC

Steyer was one of 14 prominent liberals and Democrats who received suspicious packages from Cesar Sayoc, a 56-year-old Florida man arrested on Friday. The bomb was intercepted at a mail facility in California.

On Tuesday, House Majority Leader Kevin McCarthy tweeted, “We cannot allow Soros, Steyer and Bloomberg to BUY this election,” referring to three prominent Jewish donors. McCarthy posted the tweet even after Soros had received a pipe bomb (it was later deleted).

Majority Leader Kevin McCarthy posted this tweet AFTER a bomb was sent to Soros' house. Up until a couple of minutes ago it was pinned to the top of his profile. pic.twitter.com/FEeKoPolHL

“That was a straight up anti-Semitic move,” Steyer said.

Steyer has funded efforts to register new voters and has bankrolled a campaign to impeach Trump.