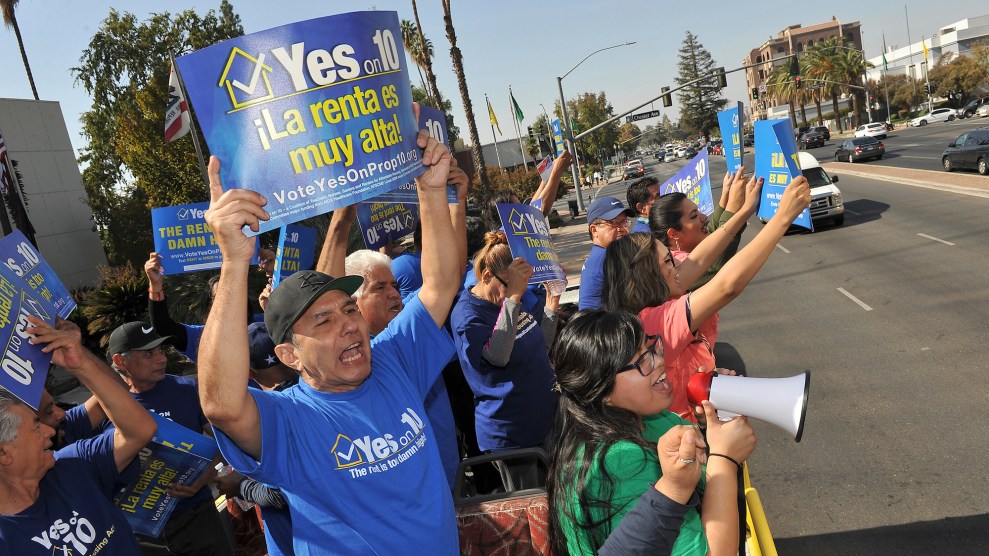 In California, where residents have been wrestling with one of the worst housing crises in the country, a ballot measure to repeal the state’s limits on rent control is the latest in a series of pushes to expand protections for overburdened tenants. It may also prove to be a harbinger for a national movement to broaden tenant protections, as more Americans shift from buying to renting.

Proposition 10 would repeal the state’s 1995* Costa-Hawkins law, which sets restrictions for rent control policies, such as limiting which kinds of units are eligible for rent control and ensuring the right of a landlord to raise rent to market price after a tenant moves out.

“It’s about allowing a conversation to take place.”

Damien Goodmon, the campaign director for Yes on 10, says the measure is not about imposing a statewide policy; rather, it’s about creating the potential for rent stabilization. To be clear, the measure does not expand rent control or change any statewide policies—it simply allows individual municipalities to decide whether or not to implement rent control. And rent control can take many forms, from strict limits on price increases to rolling policies that would only affect new buildings after a certain number of years. For example, Berkeley added a concurrent measure to the ballot that would delay expanding rent control to new buildings for 20 years after they are completed.

“If the people of a city don’t want to see rent control expanded, then we won’t do it,” Goodmon says. “It’s about allowing the conversation to take place.”

While slowing down exploding rents sounds like a good thing, the long-term consequences of rent control are much less straightforward.

It’s not just Californians who are grappling with this issue. Most states have laws that ban or greatly limit the expansion of rent control. But rising rental costs have become a flashpoint in legislatures around the country, and efforts to repeal those laws are gaining momentum. Earlier this year, legislators in Washington state introduced a bill that would lift the state’s ban on rent control, but the law never made it out of committee after opposition from the real estate lobby. Similarly, in Illinois, voters in 77 Chicago precincts overwhelmingly supported lifting the statewide ban on rent control in a March referendum, and now, legislators are considering a bill to officially repeal it.

Rent control could be a major legislative front in the coming years—it has drawn widespread political appeal recently, Jenny Schuetz, a metropolitan policy fellow at the Brookings Institution, said, because it’s a way to deal with soaring costs without having to draw on government funding. In the Democratic party, three presumed presidential candidates—Senators Kamala Harris, Cory Booker, and Elizabeth Warren—have all introduced ambitious and wide-ranging bills over the last four months, that while not specifically focused on rent control, aim to expand affordable housing in an unprecedented way.

“This is bigger than a California issue,” Schuetz said. “This year I’ve seen more policy proposals aimed at alleviating housing costs than I’ve ever remembered seeing before.”

The result is a national network of housing justice advocates who are watching and rallying in support for Prop 10 in California, phone banking from out-of-state and traveling to canvass on behalf of the measure. For them, California will be another litmus test in how far rent control can go—and it’s especially crucial to see how it plays in a state that’s been at the forefront of a growing national affordable housing crisis. In the San Francisco Bay Area, for instance, prospective buyers need to make an estimated $333,000 annually to afford a median-priced home even though the median salary for a single-income household is just $82,900. And more than half of California renter households—about 3 million—are considered rent burdened, shelling out at least 30 percent of their monthly income for rent. Without rent control restrictions, some landlords increase rent by an unreasonable amount as a tactic to get rid of a tenant, serving as what Goodmon called a “de facto eviction” and creating a further need for renter protections.

But solving that crisis, many argue, is likely much more complicated than repealing Costa-Hawkins. Prop 10’s opponents, which largely consist of developers, landlords, and private equity firms like Blackstone that currently manage homes acquired during the recession, are organizing a better-funded campaign to defeat the measure. The No on 10 camp has poured $78 million into their fight, while Yes on 10—largely funded by the AIDS Healthcare Foundation, which sees the measure of a matter of social justice and public health—has just about $26 million, making the campaign over Prop 10 the second-most expensive measure on the ballot.

The main problem with Prop 10, its opponents argue, is that rent control’s long-term effects reach far beyond simply limiting how much a landlord can charge. Policies that create an artificially low price cap are almost universally criticized by economists for failing to address supply in expensive, competitive housing markets. The price ceiling can drive landlords to take their rentals off the market, converting them to condominiums, or, as has happened more recently, Airbnbs. Steven Maviglio, a spokesman for the No on 10 campaign, says Mountain View is a prime example of how rent control can have unintended consequences. “We’re seeing some big conversions of rent-controlled apartments into a condominium, and those people have been essentially evicted from their apartment if they weren’t able to buy it,” he said.

Our first campaign ads are up! Affordable housing experts and economists agree that #Prop10 is deeply flawed and badly written. It does nothing to reduce rents or fight #homelessness. In fact, Prop 10 will make a bad problem worse. https://t.co/KUwVRCaVN1 pic.twitter.com/aKZhQ8LePt

Prop 10 opponents say that its not just landlords that are skittish about the measurestrict rent control policies, where buildings are subject to price caps regardless of age or type, could also discourage builders from investing in new properties in the first place because they wouldn’t be able to charge market rates for the units. Hesitation to build, in turn, could exacerbate the root cause of the housing crisis. “California has to build more houses,” Schuetz says. “It’s the only long-term solution. It’s been underbuilding houses relative to population growth and job growth for about 30 years now, and it just gets worse over time.”

Rent control can alleviate the financial burden on renters who are covered, but it serves, at best, as a short-term “band-aid,” she adds, that is not a true solution to the state’s housing crisis.

But Goodmon, from Yes on 10, insists that it would take years for rent to level off even under the most ambitious statewide building plans. To that end, Schuetz admits that California’s myriad policies on zoning laws, property taxes, and environmental codes make it “as hard as humanly possible” to build quickly.

Corporations are spending millions to stop Prop 10 so they can keep charging sky-high rents. Their greed is impacting millions of families & kids. We can fight back. Allow communities to limit excessive rents. Vote #YesOn10. Thanks, @LATenantsUnion, for this important video. pic.twitter.com/9RnhtgT50x

It’s hard to know what will happen Tuesday, but the polling for Prop 10 has not been promising. In September, a Public Policy Institute of California survey found that while 52 percent of all likely voters support rent control policy, only 36 percent say they would vote to pass the ballot measure. The study attributes the gap to the state’s complex ballot initiatives process, which often leaves voters confused over what would happen should a measure pass. Bill Pryzlucki, the executive director of People Organizing for Westside Renewal, an LA-area group that is canvassing in support of the measure, said he’s seeing that play out on the ground. The “No” camp is far outspending the Yes on 10 campaign in advertising, so Pryzlucki says he often talks to people who have only heard from the “No” campaign—voters who often change their minds to support the repeal after they learn more about the limited scope of the measure. But the grassroots organizing may not be enough to overcome a flood of negative advertising days before the election. When the PPIC poll was conducted again in October, support for the measure had plummeted to just 25 percent.

Even if the proposition falls short on votes in November, housing advocates say that the battle for expanded tenant’s protections, through measures beyond just rent control, will continue.

“Prop 10 is only one piece of a broader strategy for housing justice and a housing guarantee for everyone,” Pryzlucki said. “If it fails, we will continue to be in the same world we live in now. It would be disappointing but we’ve been disappointed before.”

This article has been corrected to accurately state the date Costa-Hawkins passed.