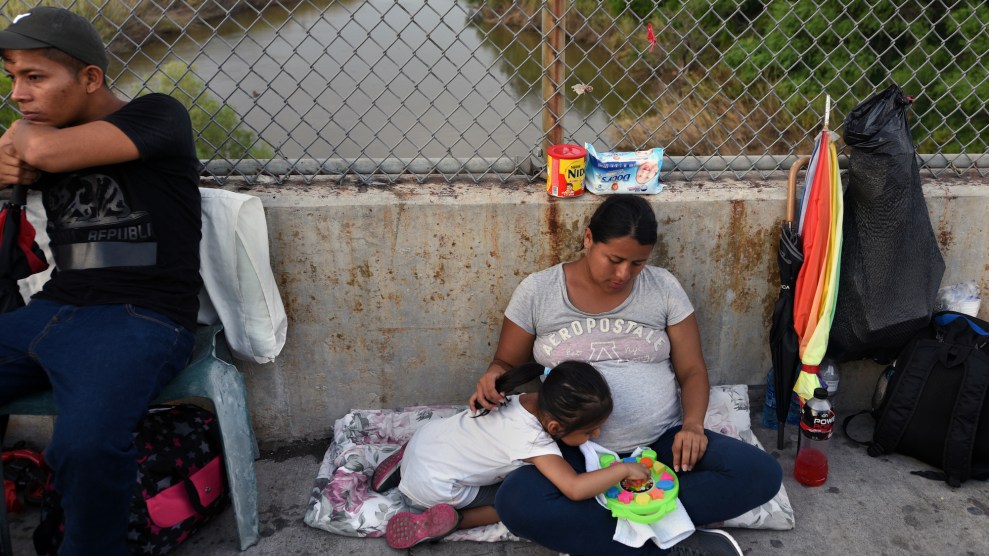 Diana Zumiga, who was eight months pregnant, slept on bridge with her three-year-old daughter Daylin in July. US border officials made them wait on a bridge between Matamoros, Mexico, and Brownsville, Texas.Carol Guzy/ZUMA

President Donald Trump signed an order on Friday morning that blocks migrants from receiving asylum for at least 90 days if they cross the US-Mexico border illegally.

Trump’s proclamation flouts the plain text of US immigration law, which states that migrants are eligible for asylum “whether or not” they arrive “at a designated port of arrival.” But, as with his travel ban last year, Trump is using a section of US law that gives him broad power to temporarily ban groups of people from coming to the United States if he deems their entry to be “detrimental” to the national interest.

The asylum ban will be challenged in court and is likely to be quickly blocked by federal judges. Lee Gelernt, the deputy director of the American Civil Liberties Union’s Immigrants’ Rights project, told NBC News on Thursday, “The proposal is patently unlawful and there will be a court challenge.” But it’s possible that the Supreme Court will eventually reinstate the rule, and administration officials believe Justice Brett Kavanaugh is likely to side with them.

The proclamation begins by highlighting the caravan of migrants who are slowly walking toward the United States. It is Trump’s most direct attack on asylum-seekers since another caravan earlier this year led his administration to adopt a now-abandoned family separation policy. As Vox has reported, the Trump administration was working on a similar asylum ban before the current caravan left Honduras, but it planned to implement it through regulation that wouldn’t take effect for months. The decision to implement the plan immediately and without a chance for public comment makes it even more likely to be struck down in court.

After the proclamation goes into effect on Saturday, adults and families seeking asylum who cross the border illegally will not be eligible for asylum. (Minors traveling alone will not be directly affected by the rule.) Instead, under a rule announced by administration officials on Thursday, those asylum-seekers will have to meet higher a bar to remain in the United States. Even if they do, they will not be given a path to citizenship, as asylum recipients currently are.

The Trump administration says it hopes the new policy will force asylum-seekers to cross the border at official ports of entry. But the administration has already been forcing asylum-seekers who go to ports of entry to spend weeks waiting in Mexican border towns. The Department of Homeland Security’s Office of Inspector General found last month that the wait times likely led families to cross the border illegally and then be separated by US officials.

The Trump administration has known about the waits for months and has shown little or no interest in fixing the problem. Trump stated in his proclamation that he is directing Homeland Security Secretary Kirstjen Nielsen to “commit additional resources” to ports of entry. But he did not provide specifics, and there is reason to be skeptical about if and when that will happen. Julia Preston reports for the Marshall Project:

Officials @DHSgov make clear they're in no hurry to place extra border or asylum officers at ports of entry even while insisting #asylumseekers must go there. Strategy to create even bigger asylum bottlenecks, back-ups at entry stations, more pressure on #Mexico. @MarshallProj

Trump is asking Nielsen and acting Attorney General Matthew Whitaker to recommend whether or not to extend the ban beyond 90 days. Whitaker issued a statement on Friday that made no mention of the caravan and instead portrayed the border “crisis” as a long-term problem that requires a long-term solution.