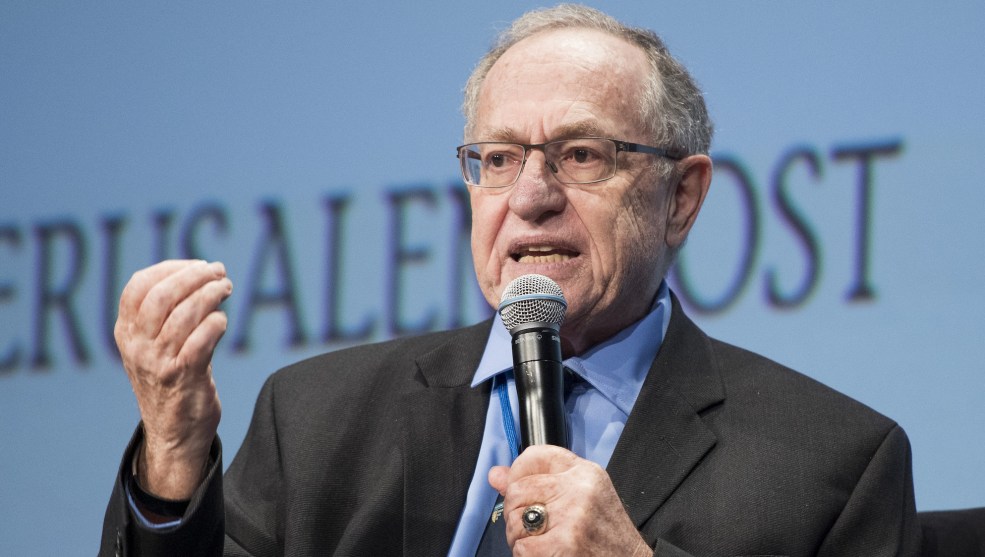 Alan Dershowitz, whose TV appearances denouncing the Russia investigation have endeared him to President Donald Trump, has for more than a year been informally advising the president and his administration on the Middle East peace process. But while counseling Trump—and regularly sounding off in op-eds about Middle East politics—the Harvard law professor earlier this year agreed to a contract to provide advice to an American lobbyist who represented Qatar, according to court records. Dershowitz did not disclose the existence of the agreement in public statements or to the White House.

Joseph “Joey” Allaham, a former kosher restaurant owner and at the time a registered lobbyist for Qatar, said in a sworn deposition taken on June 19 that he had contracted with Dershowitz for the attorney to provide him with “advisory and consulting” services “in many matters that involved [the] Middle East, especially Israel.” He also said Dershowitz worked with him on issues related to Qatar and the “Arab regions [of the] Middle East or Africa.” And he noted, “Whatever I do, he works with me as a consultant.” Allaham refused during the deposition to say whether he had made any payments to Dershowitz.

A heavily redacted transcript of the deposition was recently made public in connection with a federal lawsuit filed by disgraced Republican fundraiser Elliott Broidy over what he alleges was a Qatari effort to hack and leak his emails. Broidy has contended that Allaham, who registered in June as an agent for Qatar for work dating back to October 2017, and another lobbyist for the country, Nick Muzin, a former top aide for Sen. Ted Cruz (R-Texas) who worked on the Trump presidential transition, were involved in this alleged operation to discredit him. The lobbyists and the government of Qatar deny the allegations, and a judge threw out the suit in August on technical grounds. But recently disclosed records from the case have shed light on aspects of the pro-Qatari lobbying effort.

“Whatever I do, he works with me as a consultant,” lobbyist Joey Allaham said of Dershowitz in a June deposition.

Allaham’s lawyer, Craig Engle of Arent Fox, said that the contract with Dershowitz called for the famous lawyer to provide advice on “cultural, international relations, and legal issues.” Dershowitz disputed that description of the deal, insisting that the contract solely covered legal advice. He told Mother Jones that he “never received a single penny pursuant to that contract” or from any other work with Allaham and that the deal was “never implemented.” Dershowitz said that following a discussion with Allaham in early 2018, Allaham “drafted a retention letter but my legal advice was never actually sought or given.” Dershowitz maintained that he did not advocate on behalf of any nation Allaham was representing or courting as a lobbying client. “I have done nothing and will do nothing on behalf of any country,” he said. Neither Dershowitz nor Engle would agree to allow Mother Jones to review the contract, citing attorney-client privilege.

Any connection that Dershowitz had to lobbying related to the Middle East is notable because of his role advising the Trump administration on policy in the region. Last year, Dershowitz, a vocal backer of the Israeli government, reportedly delivered a message regarding peace talks from Trump to Israeli Prime Minister Benjamin Netanyahu. He subsequently met with Trump on the same topic in the fall of 2017. In April, he attended White House meetings with Trump and White House aides, advising them on negotiations with the Palestinian Authority. The April meetings came on the same day that the Emir of Qatar met with Trump to discuss topics including Qatar’s relationship with Israel.

Dershowitz said that he never advised the White House on issues related to Qatar, and he asserted that by the time of his April visit to the White House, he knew he would not be advising Allaham on matters related to Israel. “If I did any work, I would immediately disclose it, to anybody,” he noted. “It never happened.”

Dershowitz bristled when asked by Mother Jones if his agreement with Allaham could raise questions about the independence of his advice to the White House. He repeatedly threatened to sue for defamation if Mother Jones reported that he had a conflict of interest.

Dershowitz’s relationship with Allaham began in the fall of 2017, when Allaham approached him at the Park East synagogue in Manhattan and invited the attorney to visit Qatar. “He said he had a relationship with the Qatari government,” Dershowitz told Mother Jones.

At the time, Qatar was mounting an aggressive lobbying campaign to counter the influence of its regional rivals. In June 2017, Saudi Arabia and the United Arab Emirates had led an effort by Middle Eastern states to impose a blockade on Qatar. The countries cited various causes for the action. But Trump, who expressed support for the blockade, seized on the allegation advanced by Saudi Arabia and its allies that Qatar funds terrorist groups, including Hamas.

Allaham’s invitation to Dershowitz to visit Qatar was part a larger effort to convince prominent US allies of Israel with access to the Trump White House to reconsider their critical views of Qatar. Allaham and Muzin have said they developed a list of around 250 people, among them Dershowitz, who might be able to influence Trump in favor of their client. The lobbyists then sought to cultivate people on the list, arranging junkets for some of them to Doha, Qatar’s capital, and direct payments to others, hoping to at least temper criticism of Qatar from people on the list.

In early January, Allaham arranged for Dershowitz to visit Doha along with Mort Klein, the president of the Zionist Organization of America, and former Arkansas Gov. Mike Huckabee, the father of the White House press secretary, who calls himself an ardent Israeli ally. The Americans met with Qatar’s Emir, Tamim bin Hamad al-Thani, and Mohammed Al Emadi, Qatar’s ambassador to Gaza, who plays a key role in Qatar’s courtship of Israel and Washington. (Allaham said in his deposition that he had a contract with Huckabee, and he noted in a lobbying report that he paid Huckabee $50,000 around the time of the trip.)

Dershowitz continued on to Morocco after the Doha trip, a visit Allaham also helped organize. Dershowitz said he first discussed a contract with Allaham following this trip.

After getting back from Qatar, Dershowitz wrote a January 12 op-ed for the Hill supporting Qatar and questioning claims about the nation’s financial support of Hamas. “Qatar is quickly becoming the Israel of the Gulf States,” he wrote. (He later said he meant only that both nations face boycotts and are surrounded by enemies, and that he “never intended to compare Israel, a vibrant democracy, to any Gulf monarchy.”)

In a January 25, 2018, exchange of WhatsApp messages that were turned over during discovery in the Broidy lawsuit, Allaham and Muzin seemed to cite Dershowitz’s efforts as helpful to their lobbying campaign for Qatar. “Alan is doing something tomw himself,” Allaham wrote in a message to Muzin, which Mother Jones reviewed. “He helped so the hill one which I think it’s great.”

Asked about the exchange, Dershowitz said Muzin and Allaham were likely referencing his Hill piece, adding that the article reflected “my own conclusions, as did the subsequent op-eds.” He also sent to Mother Jones an image of his calendar for January 26, 2018, noting it shows that he did “nothing related to Qatar” on that day.

On January 26, the Washington Examiner published an op-ed by Dershowitz devoted mostly to disputing criticism of his prior column about Qatar in the Hill. In the article, he faulted his detractors for ignoring Saudi Arabia’s flaws yet slamming Qatar. Dershowitz denied he was “willing to express views I don’t believe for money.” He called that “an argument I would expect from anti-Semites, who stereotype Jews as ‘money hungry,’ not from reasonable people.'”

“Do my critics really believe I can be bought?” he asked.