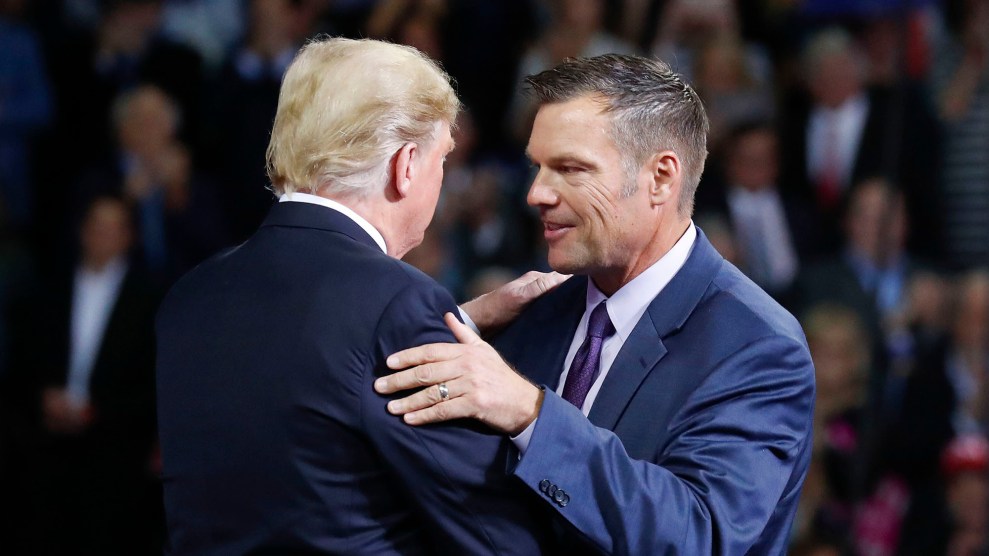 In a huge victory for Democrats in a deep-red state, Democrat Laura Kelly defeated Republican Kris Kobach and independent candidate Greg Orman on Tuesday to become the next governor of Kansas. The vote—which Kelly was leading by a 10-point margin with about two-thirds of the vote reporting—is a repudiation of the brash right-wing politics embraced by Kobach, who gained national attention as the architect of laws making it harder to vote and cracking down on undocumented immigrants.

Kobach, the former vice chair of Donald Trump’s election integrity commission, repeated false claims on the campaign trail about the prevalence of widespread voter fraud and argued that every state needed to adopt strict voter ID laws and proof-of-citizenship requirements to register to vote. The proof-of-citizenship law Kobach wrote in 2011 blocked 35,000 Kansans from registering to vote before it was ruled unconstitutional by a federal court, and his voter ID law caused more than 1,200 ballots to be rejected while he was secretary of state. Kobach was also held in contempt of court by a federal judge and ordered to take six hours of continuing legal education for “repeated and flagrant violations” of court rules. Like Trump, Kobach also played on fears of undocumented immigration, falsely claiming in one TV ad that Kelly was “an open borders extremist” who “voted to allow sanctuary cities.”

But Kelly, a moderate Democrat from Topeka who served as assistant minority leader in the state senate, successfully portrayed Kobach as an extremist who supported the far-right agenda of former Republican Gov. Sam Brownback, who left office with a 26 percent approval rating. Brownback’s huge tax cuts for the wealthy bankrupted the state and led to massive cuts in education spending, which Kelly vowed to reverse. In a rare show of bipartisanship, she was endorsed by every living Republican governor of Kansas except for Brownback. She pledged to expand Medicaid, spend more money on public schools, and invest in the state’s crumbling infrastructure. “Everywhere you look: Our schools, our roads, our economy, our health care, all devastated by the Brownback tax experiment,” Kelly said in one campaign appearance, tying Kobach, who supported the former governor’s tax cuts, to Brownback.

Kelly can temper Kansas’ status under Kobach as one of the toughest states in the country to vote. She can veto bills from the legislature that make it more difficult to vote, work with the secretary of state’s office to expand ballot access, and will ensure that Democrats have a seat at the table when it’s time to redraw Kansas’s legislative maps following the 2020 census.

Many political analysts believed Kobach would use the Kansas governor’s office as a platform to launch a run for president in 2024. Now, some political insiders say he’s likely to be offered a job in the Trump administration.