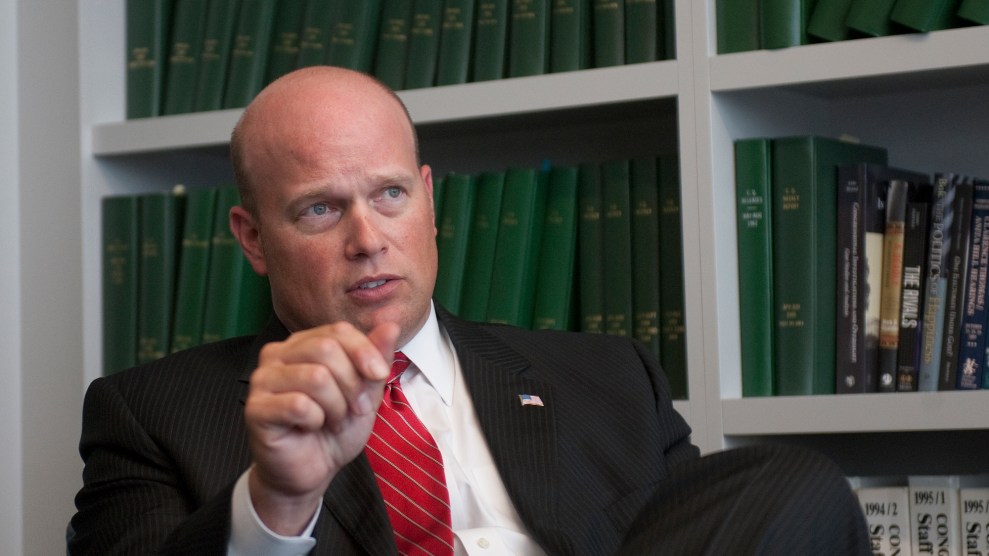 Top Democrats demanded Sunday that acting Attorney General Matthew Whitaker step aside from overseeing special counsel Robert Mueller’s investigation of Russian meddling in the 2016 presidential election, arguing that he has demonstrated a “clear bias” against the probe.

“There are serious ethical considerations that require Mr. Whitaker’s immediate recusal from any involvement with the Special Counsel investigation of the Russian government’s efforts to interfere in the 2016 presidential election,” six senior congressional Democrats wrote in a letter Sunday to Lee Lofthus, the assistant attorney general for administration and the Justice Department’s top ethics official.

The six Democrats say that a “history of hostile statements” toward Mueller’s investigation and ties to a figure embroiled in the Trump-Russia scandal hinder Whitaker’s “ability to supervise the investigation independently and impartially.” They argue that Whitaker’s relationship with Sam Clovis, who served as national co-chairman of Trump’s 2016 campaign, creates a conflict of interest, because Clovis was involved in contacts between the Trump campaign and Russia. Whitaker worked on Clovis’ 2014 campaign to be Iowa State Treasurer and reportedly maintains ties to Clovis. During the campaign, Clovis oversaw George Papadopoulous, a foreign policy adviser who pleaded guilty to obstructing justice by lying to FBI agents about his contacts with suspected Russian agents. Clovis encouraged Papadopolous’ efforts to broker a meeting with Russians and has appeared before a grand jury convened by Mueller.

Before joining Sessions’ staff, Whitaker, a former US attorney in Iowa, routinely attacked the Mueller probe in media appearances. Whitaker has echoed Trump’s words by saying that Mueller’s investigation risked becoming “a mere witch hunt,” argued that there is no evidence Trump that obstructed justice, and asserted that Trump could legally instruct prosecutors to cease investigating any individual suspect. In August 2017, Whitaker authored an article titled “Mueller’s Investigation of Trump Is Going Too Far,” in which he urged restricting the scope of the investigation. On July 26, 2017, Whitaker said he “could see a scenario where Jeff Sessions is replaced with a recess appointment and that attorney general doesn’t fire Bob Mueller but he just reduces his budget so low that his investigation grinds to almost a halt.”

“There are serious ethical considerations that require Mr. Whitaker’s immediate recusal from any involvement with the Special Counsel investigation.”

Whitaker has also claimed that there is no evidence that Russia interfered in the 2016 election. The Democratic members of Congress who wrote the letter note that Whitaker said in March 2017 that the left “is trying to sow this theory that essentially Russians interfered with the US election. Which has been proven false.” That statement “demonstrates plainly that Mr. Whitaker has pre-judged the outcome of the Special Counsel investigation,” the Democrats wrote.

“Mr. Whitaker’s statements indicate a clear bias against the investigation that would cause a reasonable person to question his impartiality,” the letter states.

Whitaker reportedly has said that he used televised attacks on the Mueller probe to get Trump’s attention. He interviewed for a job on Trump’s legal team before joining Sessions’ staff.

Democrats vowed Sunday to investigate the circumstances of Whitaker’s promotion to acting attorney general. Rep. Jerold Nadler (D-N.Y.), who co-signed the letter and will take over the House Judiciary Committee chairmanship in January, said on ABC’s This Week that Whitaker will be the “very first witness” he calls before the committee. Rep. Adam Schiff (D-Calif.), another letter signer who will lead the House Intelligence Committee, said Sunday that Democrats plan to find out if Whitaker promised Trump that he would take steps to hamper Mueller.

“If he has any involvement whatsoever in this Russia probe, we are going to find out whether he made commitments to the president about the probe, whether he is serving as a back channel to the president or his lawyers about the probe, whether he’s doing anything to interfere with the probe,” Schiff said on NBC’s Meet the Press. “Mr. Whitaker needs to understand that he will be called to answer and any role that he plays will be exposed to the public.”