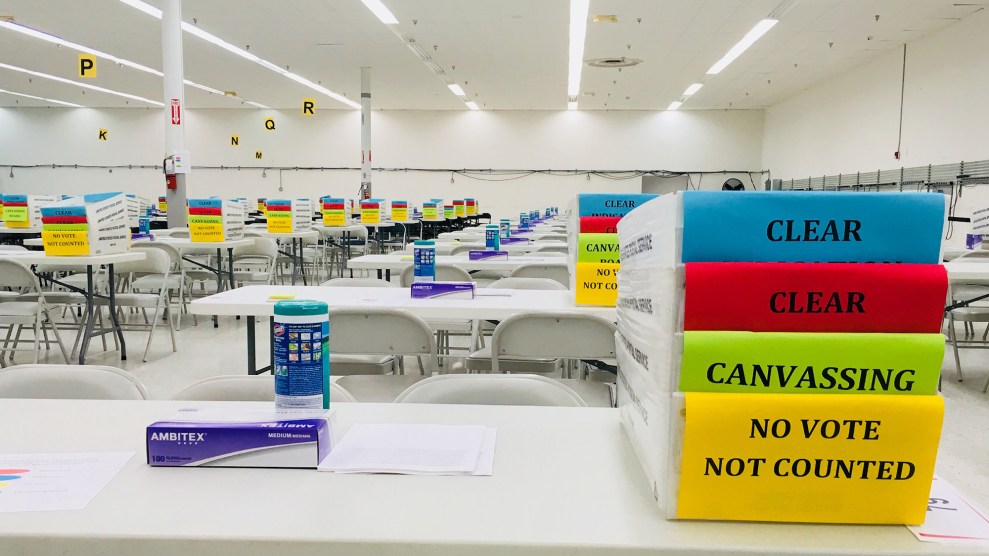 The Broward County facility where the hand recount is taking place.Pema Levy/Mother Jones

As the hand recount in Florida’s contentious Senate election got underway in Broward County, it quickly became clear that Democrats were headed for a bad day. This is the county where incumbent Democrat Bill Nelson needed to net thousands of new votes on Friday. But minutes into the recount, that became unlikely.

Broward County is at the center of Nelson’s hopes for defeating Republican Rick Scott, who currently leads by fewer than 13,000 votes, because there were tens of thousands of ballots in the county that registered no vote in the Senate race. Because Broward is a heavily Democratic county, the Nelson campaign had hoped that those so-called undervotes were actually votes for Nelson that the tabulating machines had skipped over. But on Friday morning, it quickly became apparent that this was not the case.

Instead, it’s likely ballot design that put a significant dent in Nelson’s vote totals here in Broward County, and may have cost him the race. The Senate candidates were listed right under the instructions on the ballot, and voters moving quickly could easily have overlooked that race.

Same thing happening at table 99. A lot of no votes in Senate race. pic.twitter.com/MUQFIaLrdk

Last Saturday, Marc Elias, an election attorney working for Nelson, told reporters on a call that he expected the hand recount to give Nelson the lead. “We expect that when we get to a hand recount, we’re going to see a significant jump in the total number of votes counted versus the machines,” he said. “Based on just the demographics and the partisan breakdown of various counties, I think you’re going to see a significant increase in the Nelson vote share.”

But in Broward, that does not appear to be happening. People circulating among the tables observed the same thing. Two observers, one for each party, both estimated that 90 percent of the ballots being recounted were “no votes.” An hour and a half into the hand recount of thousands of ballots, the work appeared almost done.