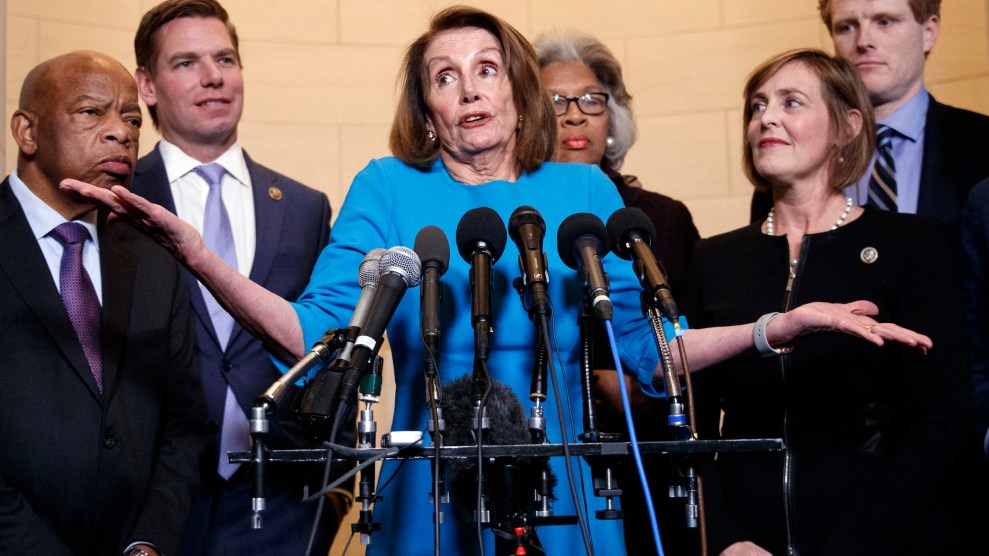 There were few surprises when House Democrats chose their next slate of leaders in a closed-door session on Wednesday afternoon. Both Steny Hoyer (Md.), who has long held the No. 2 spot, and Jim Clyburn (S.C.), who’s been in third place since 2011, received overwhelming support from their colleagues to remain in those slots when their party assumes the majority in January. And despite several weeks of discussions about replacing their speaker, only 32 Democrats voted against Nancy Pelosi, the California congresswoman who has led House Democrats since 2007.

The outspoken faction of Pelosi detractors led by Reps. Tim Ryan (Ohio), Seth Moulton (Mass.) and Kathleen Rice (N.Y.) were unable to significantly stymie Pelosi’s quest for her party’s speakership nomination. With no named challenger heading into the caucus vote, defeating Pelosi today was never the point: The rebels were keeping their eye on whether Pelosi had the 218 votes she’d need to succeed in the floor confirmation vote come January. And with 32 detractors, three blank ballots, and one absent House member, that left Pelosi with only 203 yeas.

If past is prologue, that number of detractors won’t hold steady over the next five weeks. Two years ago, when Ryan challenged Pelosi for the top spot, 63 caucus members opposed her, but only four actually followed through with their floor votes. Some of the 16 House Democrats who signed a letter opposing her for the speakership early last week have already told Politico that they’d consider supporting her in exchange for a concrete timeline that transitions her leadership to some of the younger Democrats. (Pelosi and Clyburn are 78 years old; Hoyer is 79.)

But previous behavior may not foreshadow what’s to come: This year’s “nay” votes came in the absence of an alternative, and several incoming freshmen Democrats campaigned on the promise of not supporting Pelosi—a promise some, like Reps.-elect Max Rose and Anthony Brindisi of New York, say they don’t plan on breaking in their first recorded vote as a member of Congress.

“Our request was and always has been simple: Produce a meaningful plan for leadership transition, as you promised in the summer, to allow a new generation of leadership to step forward,” Moulton said in a statement after meeting privately with Pelosi, Rice, and Ryan earlier this afternoon. “I am disappointed to report that no agreement was reached in this initial meeting.”

Rep. Ryan had been planning for today’s results all along. In a conversation two weeks ago, Ryan told me he’d be keeping an eye on whether Pelosi had secured 218 votes, and if she didn’t, it would be a signal to start thinking about who else they might want to nominate. “After one round on the floor of her not getting it, we reassess and go into caucus to figure out who this is going to be,” he told me. “Everybody should have an idea of two or three people.”

No challengers to Pelosi have been floated, but a spokesperson for the rebel faction speculated another name might emerge now that Pelosi didn’t hit the magic 218 number.

For now, Pelosi doesn’t seem to care if or when they do. In a press conference after the vote, she cut off a reporter’s attempt to ask her about the opposition.

“Let me tell you something,” Pelosi said. “I’m talking about scores of members of Congress who just gave me a vote—giving me a vote of confidence. That is where our focus is.  Are there dissenters? Yes, but I expect to have a powerful vote as we go forward. Any other questions?”