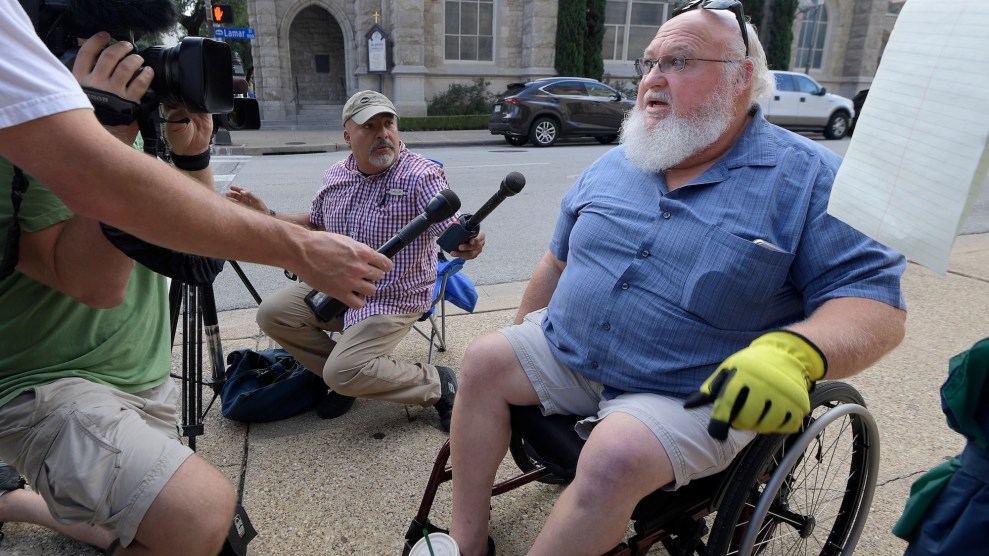 Michael Lummus talks to the media about his reliance on the Affordable Care Act outside a courthouse in Fort Worth, Texas.Max Faulkner/Star-Telegram via AP

Six months ago, Republican state attorneys general and governors from 20 states filed a lawsuit in Texas arguing that the entirety of the Affordable Care Act, better known as Obamacare, is unconstitutional now that Congress has repealed the penalty for failing to buy health insurance as mandated by the act. The Republicans were in a hurry: They asked friendly Texas District Judge Reed O’Connor for an immediate, nationwide injunction that would halt enforcement of the law, arguing that “the sooner an order issues enjoining the ACA, the better…so that all States and individuals can prepare to operate and live without the ACA.”

Donald Trump’s administration helped pave the way for a quick resolution by refusing to defend the law. In June, Trump’s Justice Department filed a brief suggesting that the judge immediately invalidate the law’s protections for preexisting conditions and ban on price-gouging of older people. In early September, O’Connor held a hearing in which he seemed to sympathize with the Republicans. He promised to issue a decision “just as quickly as I can.”

That was two months ago.

Tim Jost, a professor emeritus at Washington and Lee University School of Law and an expert on the ACA who is following the litigation, calls O’Connor “an intensely political judge” who indicated strong opinions against the ACA during the September hearing. “Why hasn’t he ruled yet?” asks Jost. “I suspect that he is waiting until the election is over because the last thing Republican candidates need right now is another reminder that they are trying to get rid of preexisting-conditions protections.”

Many Republicans are facing tight races in this year’s midterm elections, where health care has emerged as a defining issue. Obamacare’s preexisting-conditions protections have proved to be exceptionally popular with the voters, and the Texas lawsuit promises to obliterate them and return the country to the pre-2010 days when Americans with any prior health problems could be denied coverage or charged unaffordable rates.

“I suspect that he is waiting until the election is over because the last thing Republican candidates need right now is another reminder that they are trying to get rid of preexisting-conditions protections.”

Many of the very people who helped bring the suit are now running away from it. Republican candidates, including Wisconsin Gov. Scott Walker, have strained credulity to convince voters that they will protect coverage for preexisting conditions, even as their lawsuit would end that coverage. This week, Trump claimed he never even signed off on the Texas lawsuit, despite legal filings showing he did.

O’Connor seems poised to give the Republicans what they asked for, but some legal observers suspect he’s waiting until after the midterms to blow up Obamacare. University of Michigan law professor Nicholas Bagley worked in the Obama Justice Department and has filed an amicus brief in the case on the side of more than two dozen states that have intervened to defend the health care law. He tweeted Monday:

This is your friendly pre-election reminder that a Texas judge is poised to eliminate the ACA's protections for preexisting conditions and has probably been holding off because he knows it'd be bad for Republicans in the midterms.

Bagley tells Mother Jones the notion that O’Connor is holding off on his opinion to help Republicans is “not a conspiracy theory. If it were not a handpicked judge known for his partisan loyalties I’d feel very differently.” He says that if the judge were going to reject the Republicans’ lawsuit, he would have done that by now to reassure the insurance markets.

Appointed in 2007 by President George W. Bush, O’Connor has a history as a partisan judge. “He is the go-to judge for anybody challenging anything done by the Obama administration,” says Jost, who explains that Republicans are able to get their cases before him because he is the only active district court judge who sits on cases in this region of Texas. In most federal courts, cases are randomly assigned to one out of a number of judges. But in Ft. Worth and Wichita Falls, Texas, Jost says, “He’s the only judge there, so you put your coin in the slot and pull the lever” and out comes O’Connor.

Conservatives have taken advantage of that fact by filing other controversial lawsuits in O’Connor’s court in recent years, and asking for injunctions that would apply not just in Texas but nationwide. And in the past, O’Connor has been happy to fulfill those requests—and quickly. In August 2016, he issued a nationwide injunction blocking the Obama administration’s directive that school districts give transgender students access to restrooms based on their gender identity. That decision came just nine days after a hearing in the case. At the end of December 2016, O’Connor issued another injunction in a case filed by Texas that blocked enforcement of Obama administration rules banning health insurers, doctors, and hospitals from discriminating against transgender people and women who’ve had abortions. He issued that ruling just 11 days after holding a hearing on the injunction request.

Despite its support for the Obamacare lawsuit, the Trump administration has acknowledged that a ruling in favor of Texas and the other Republican states would create “chaos” in the health insurance markets. In September, during the hearing before O’Connor, Trump’s Justice Department walked back from its full-throated support for the lawsuit, and essentially begged that the judge delay his ruling until after this year’s open enrollment period—which lasts until December 15 for those signing up through Healthcare.gov. But Jost suspects that based on his comments during the September hearing, O’Connor won’t wait that long. “He didn’t give any indication that he was inclined to do that. I would be a bit surprised if we don’t see a ruling from him [shortly] after the election.”