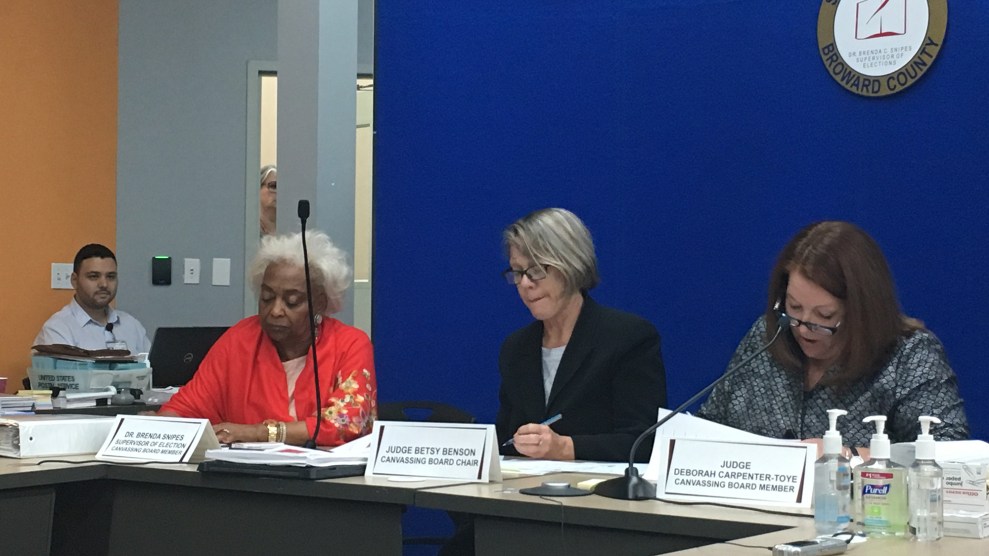 The Broward County canvassing board on November 15, the last day of Florida's machine recount.Pema Levy/Mother Jones

Broward County, the epicenter of the drama surrounding Florida’s contentious elections, just missed the deadline for submitting its machine recount totals to the Florida secretary of state. Joe D’Alessandro, director for election planning and development, announced more than two hours after the 3 p.m. deadline Thursday that the county had uploaded its results two minutes late—and the state had rejected them.

The problem, said D’Alessandro, was “my unfamiliarity with their website.” The announcement was unexpected, because the canvassing board had approved of the results ahead of the deadline and D’Alessandro had headed out of the press’ sight to upload the results. Because the results didn’t go up in time, Broward’s preliminary results from last Saturday will still appear on the secretary of state’s website. “Basically, I just worked my ass off for nothing,” D’Alessandro said.

But the snafu won’t change the basic process. Because the margin in the US Senate election is below a quarter of a percent, it still trigger a hand recount, which incumbent Democratic Sen. Bill Nelson is hoping will erase his deficit. The hand recount will begin Friday at 7 a.m.

Inside the room, this news sent shockwaves. For Dems, who need to add votes in Senate and governors races, this was a blow. If Nelson or Gillum had gained ground in the machine recount, we’ll never know.