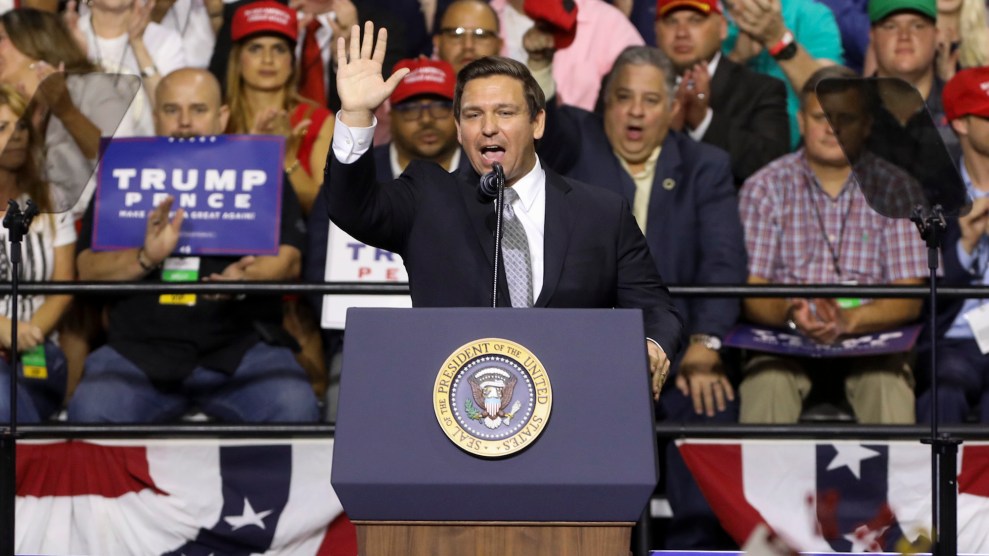 UPDATE, Sunday, November 18, 2018, 11 a.m. EST: Democrat Andrew Gillum conceded the Florida governor race—again—on Saturday evening after more than a week of contentious recounts. The concession ended the governor’s race between Gillum, the mayor of Tallahassee, and Republican Ron DeSantis, which stretched a week and a half past election day after the razor-thin margin in the race triggered an automatic recount.

Gillum originally conceded on election night after initial results showed him trailing by just under 80,000 votes. But as results continued to trickle in, DeSantis’ lead shrank to just around 33,000 votes out of more than 8.2 million cast, or 0.41 percentage points. Gillum then retracted his concession pending the recount results. But the results of that recount on Thursday affirmed that DeSantis had won. The margin did not shrink enough to trigger another recount by hand.

Gillum made the announcement in a video posted to Facebook. “We wanted to make sure that every single vote including those that were overvotes, undervotes—as long as it was a legally cast vote— we wanted those votes to be counted,” he said, adding his congratulations to DeSantis. “This was not just about an election cycle, this was about creating the kind of change in this state that really allows for the voices of everyday people to show up again in our government and in our communities.”

On the campaign trail, DeSantis parroted much of President Donald Trump’s rhetoric and agenda, backing stricter immigration policies and the abolition of sanctuary cities. Some GOP strategists had worried the Trump-aligned lawmaker’s positions were too extreme in a state Trump won by a razor-thin margin two years ago. They’d preferred Florida agricultural commissioner Adam Putnam, a more mainstream Republican, but revelations that Putnam’s office had failed to perform background checks when issuing concealed carry firearm permits—as well as Trump’s endorsement of DeSantis—hurt Putnam’s chances in the months leading up to the August primary. In the end, DeSantis prevailed.

Gillum, by contrast, put forth an unambiguously progressive platform, an unorthodox move in a state that typically elects Republicans and centrist Democrats for statewide office. The Bernie Sanders supporter advocated for Medicare-For-All and a $15-per-hour minimum wage. He pledged to dismantle a host of discriminatory practices, promising to prohibit employers from asking whether job applicants have past felony convictions and to repeal the state’s so-called “stand your ground” law that provides immunity to people who respond to perceived physical threats with lethal force. He had the backing of Sanders’ Our Revolution, former president Barack Obama, and Puerto Rico Gov. Ricardo Rosselló, who weighed in as politicians from both parties worked to court the tens of thousands of Puerto Ricans who fled the island after Hurricane Maria.

Race played a central role in the campaign. The morning after the Florida primary, DeSantis appeared on Fox News to tell Floridians not to “monkey this up” by choosing Gillum. A white supremacist group sent out robo-calls that mocked Gillum with a racist minstrel dialect and jungle sounds. At a rally for DeSantis early last month, Florida Republican Rep. Matt Gaetz nicknamed the Tallahassee mayor “Andrew Kill-em”—a reference to the crime rate in Tallahassee. On Monday, Trump tweeted that Floridians had a choice between DeSantis, a “Harvard/Yale educated man,” and Gillum, “a thief.”

In Florida there is a choice between a Harvard/Yale educated man named @RonDeSantisFL who has been a great Congressman and will be a great Governor – and a Dem who is a thief and who is Mayor of poorly run Tallahassee, said to be one of the most corrupt cities in the Country!

Gillum didn’t shy away from confronting those attacks. “Now, I’m not calling Mr. DeSantis a racist,” Gillum said during an October debate. “I’m simply saying the racists believe he’s a racist.” He employed a similar argument about the president. “I have not called the president a racist, but there are racists in his sympathizers who believe he may be, which is why they go to his aid, which is why he has provided them cover,” Gillum told CNN last week.

Trump repeatedly weighed in during the campaign, touting DeSantis’ hardline stances on immigration and criminal justice. Last week, Trump held a rally in the Sunshine State to rile his base up for DeSantis.