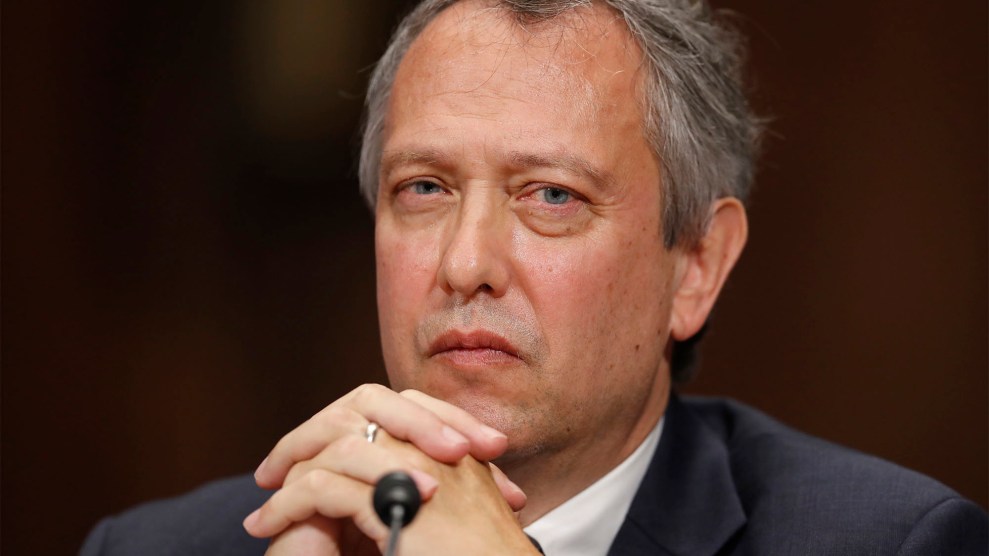 Thomas Farr during a Senate Judiciary Committee hearing on his nomination on September 20, 2017.Alex Brandon/AP

Update 11/29/18: On Thursday, Sen. Tim Scott (R-S.C.) announced that he would oppose Farr’s confirmation, effectively killing the nominee’s chances of Senate approval. A day earlier, Scott had supported a procedural vote to advance Farr’s nomination, but with Sen. Jeff Flake (R-Ariz.) voting no, the Senate split 50-50, and Vice President Mike Pence cast the tie-breaking vote. Now that Scott will not be supporting Farr, he lacks the votes necessary to be confirmed.

After a barrage of laws made it harder for people of color to vote in this month’s midterm elections, the Senate is set to vote this week on a controversial judicial nominee who repeatedly defended such laws in federal court.

Last year, President Donald Trump nominated Thomas Farr, a Republican lawyer based in Raleigh, to be a federal judge for the Eastern District of North Carolina, which spans 44 counties from Raleigh to the Atlantic coast. He has a long history of representing the state against voting rights groups accusing it of discrimination against voters of color. In 2013, North Carolina’s GOP-controlled Legislature hired Farr to defend a sweeping set of voting restrictions that a federal appeals court ultimately struck down for targeting black voters “with almost surgical precision.” The North Carolina Legislature also hired Farr to defend redistricting maps for Congress and the state Legislature that have since been invalidated in court, with one federal panel calling the state legislative districts “among the largest racial gerrymanders ever encountered by a federal court.”

Farr’s defense of such laws has led civil rights groups and Senate Democrats to vigorously oppose his nomination. “Every American should be alarmed by the attempt to confirm a nominee with Farr’s egregious record on voting rights, particularly with the Republican agenda to maintain power by limiting access to the ballot now on full display,” Senate Minority Leader Chuck Schumer tweeted on November 16.

Senate Democrats believe the vote will be close. Schumer said that every Senate Democrat opposes Farr’s nomination. Sen. Jeff Flake (R-Ariz.) has vowed to oppose all of Trump’s judicial nominations until the Senate votes on his bill to protect the investigation of special counsel Robert Mueller, so only one more Republican senator would need to defect in order to sink Farr’s nomination.

The @SenateGOP blocked 2 women nominated by Obama for this judgeship. Either would have been 1st Af-Am federal judge to serve in this district.

Now they want to confirm a man who aided the most strident attempts by NC Republicans to keep minorities from voting? Unreal. #StopFarr pic.twitter.com/FZxx4HfvIK

Farr has also attracted attention for his ties to former Sen. Jesse Helms of North Carolina. In 1984 and 1990, Farr served as campaign lawyer for Helms, whom the Washington Post‘s David Broder called “the last prominent unabashed white racist politician in this country.” In 1990, when Helms faced off against former Charlotte Mayor Harvey Gantt, the city’s first black mayor, the North Carolina Republican Party sent 125,000 postcards to predominantly African American households falsely telling them it was a crime to vote if they moved within 30 days of the election, with a punishment of up to five years in jail.

The Justice Department sued the Helms campaign, saying the postcards were designed “to intimidate and/or threaten black voters in an effort to deter such voters from exercising their right to vote.” The lawsuit said officials from the Helms campaign and the state Republican Party had discussed the mailing with “an attorney who had been involved in past ballot security efforts on behalf of Senator Helms and/or the Defendant North Carolina Republican Party.” The Raleigh News & Observer later identified that attorney as Farr.

Farr appears to have misled the Senate about his role in Helms’ disenfranchisement scheme. In response to a written questionnaire, Farr denied any involvement in the mailings or knowledge of them until he was contacted by the Justice Department. He said he “was appalled to read the incorrect language printed on the card and to then discover it had been sent to African Americans.”

But notes kept by Gerald Hebert, who served as deputy chief of the voting section at the Justice Department in the 1990s, show that Farr participated in a meeting with Helms campaign officials in October 1990 to discuss “ballot security” efforts and advised the campaign on what to do. “Farr also denied he had ‘any role in the drafting or sending of the postcards,’” Hebert told HuffPost. “But he did discuss the issue of sending the postcards three weeks before they were sent. I would describe that as playing some ‘role.’ He also denied flat-out that he did not ‘participate in any meetings in which the postcards were discussed before they were sent.’ That is definitely incorrect.”

Senate Democrats called on the Senate Judiciary Committee to hold another hearing examining Farr’s apparent contradictions, but Republicans declined to do so. The committee approved Farr’s nomination in January on a party-line vote.

“Media reports indicate that he was not truthful in his response to my question about his involvement in the Jesse Helms’s campaign voter suppression efforts,” Sen. Dianne Feinstein, the top Democrat on the Judiciary Committee, said in a November statement to INDY Week, an alternative weekly in Durham. “This disturbs me greatly.”

In a statement to Mother Jones, Gantt, the former Charlotte mayor, said he opposed Farr’s nomination. “Thomas Farr’s role in interfering with the voting rights of Black North Carolinians represents a stain on his record from which he cannot recover,” he said.

Farr also led ballot security operations for Helms in his 1984 election. A newly released Justice Department memo from 1991, first reported by the Washington Post, said “Farr was the primary coordinator of the 1984 ‘ballot security’ program” for Helms, which included “a postcard mailing to voters in predominantly black precincts which was designed to serve as a basis to challenge voters on Election Day.” The memo also confirmed Farr’s involvement in Helms’ 1990 disenfranchisement scheme, saying he convened a meeting with campaign officials before the election where they “reviewed the 1984 ‘ballot security’ program with an eye toward the activities that should be undertaken in 1990.”

Farr’s links to a top strategist for Helms have attracted additional scrutiny. In that same 1990 campaign, Helms ran an ad a week before the election that showed white hands crumpling a job rejection letter, while the narrator said over ominous music: “You needed that job and you were the best qualified. But they had to give it to a minority because of a racial quota.” The “White Hands” ad was co-written by Thomas Ellis, who had been Farr’s law partner for more than three decades. Ellis was an outspoken segregationist and had led the Pioneer Fund, which funded eugenics research that claimed whites were genetically superior to blacks. In 2007, Farr gave a speech honoring Ellis at his alma mater, Hillsdale College, a private Christian school in Michigan.

The seat on the US District Court for the Eastern District of North Carolina has been vacant since the end of 2005, the longest judicial vacancy in the country. President Barack Obama nominated two African Americans to fill the seat, but they were blocked by Republican senators. Though the Eastern District is more than a quarter African American, there has never been a black judge there.

Now, the seat could instead by filled by a conservative white judge who has spent decades defending Republican efforts to disenfranchise black voters. Many of the issues Farr has litigated in recent years could come before him if he is confirmed. In this month’s midterm elections, North Carolina voters passed a constitutional amendment requiring government-issued photo ID to vote. The Legislature is expected to pass a bill implementing the law this week, and civil rights groups, which have sued over past voter ID laws in the state, could challenge it in court. Redistricting maps passed by the Legislature could also come before Farr’s court following the 2020 census.

The Reverend William Barber II, the former president of the North Carolina NAACP and current co-chairman of the Poor People’s Campaign, led a legal challenge to the voting restrictions defended by Farr. Last year, he wrote in the New York Times, “African-Americans seeking to have their rights protected under federal law have much to fear if Mr. Farr takes the bench.”