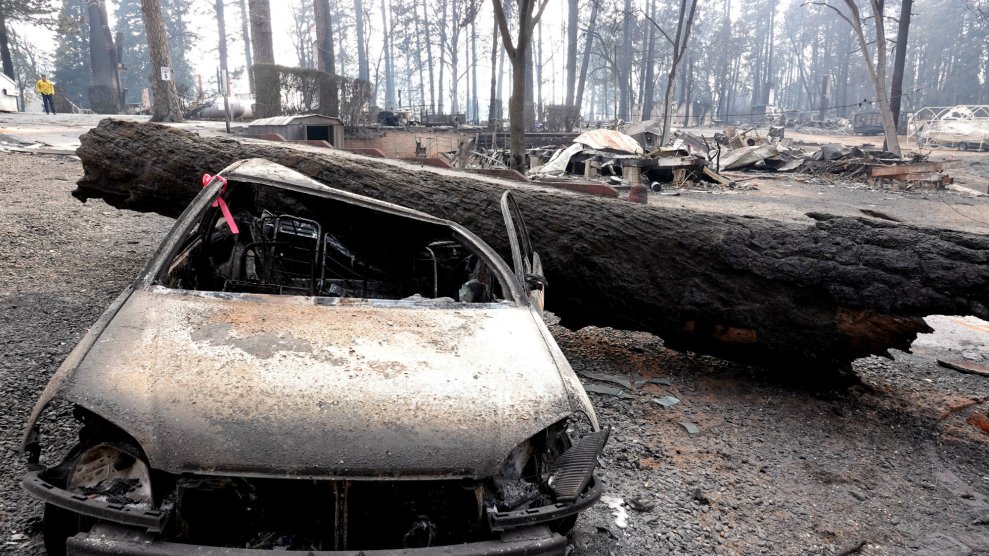 The Trump administration attempted to downplay the stark findings of its own climate change assessment, as Democrats sought to pressure the White House to avert looming economic and public health disaster.

The US National Climate change assessment, the work of 300 scientists and 13 federal agencies, was released on Friday afternoon. It found that wildfires, storms and heatwaves are already taking a major toll on Americans’ wellbeing, with climate change set to “disrupt many areas of life” in the future.

The voluminous report, which warns of hundreds of billions of dollars lost, crop failures, expanding wildfires, altered coastlines and multiplying health problems, represents the most comprehensive and sobering analysis yet of the dangers posed to the US by rising temperatures.

Climate change could slash up to a tenth of US GDP by the end of the century, the report found, with $1tn in coastal real estate threatened by rising sea levels and storms. Heatwaves are set to cause thousands of extra deaths and worsen conditions such as asthma and pulmonary disease through increased air pollution. A White House spokeswoman, however, said the assessment was “largely based on the most extreme scenario, which contradicts long-established trends by assuming that, despite strong economic growth that would increase greenhouse gas emissions, there would be limited technology and innovation, and a rapidly expanding population.”

The spokeswoman added the next report, due in four years’ time, will “provide for a more transparent and data-driven process.”

“I wrote the climate scenarios chapter myself so I can confirm it considers ALL scenarios, from those where we go carbon negative before end of century to those where carbon emissions continue to rise.”

She added on Twitter: “I wrote the climate scenarios chapter myself so I can confirm it considers ALL scenarios, from those where we go carbon negative before end of century to those where carbon emissions continue to rise.”

The climate assessment galvanized Democrats, who will control the House of Representatives next year.

“The days of denial and inaction in the House are over,” said Frank Pallone, a New Jersey congressman set to chair the energy and commerce committee. “House Democrats plan to aggressively address climate change and hold the administration accountable for its backward policies that only make it worse.

Alexandria Ocasio-Cortez, a newly-elected representative from New York City who has become a standard-bearer for the left, tweeted: “People are going to die if we don’t start addressing climate change ASAP. It’s not enough to think it’s ‘important’. We must make it urgent.”

Authors of the report, which is mandated by Congress, echoed the sense of urgency and lamented the timing of its release on the day after Thanksgiving, which is usually the most busy shopping day of the year.

“This report makes it clear that climate change is not some problem in the distant future – it’s happening right now in every part of the country,” said Brenda Ekwurzel, a co-author and director of climate science at the Union of Concerned Scientists, in a statement.

“When people say the wildfires, hurricanes and heat waves they’re experiencing are unlike anything they’ve seen before, there’s a reason for that and it’s called climate change.”

“When people say the wildfires, hurricanes and heat waves they’re experiencing are unlike anything they’ve seen before, there’s a reason for that and it’s called climate change.”

Ekwurzel added that the report “makes a convincing case the White House should stop rolling back climate policies and recognize that a much larger scale response is required to keep people safe”.

Donald Trump did not immediately comment on the report, although on Wednesday he responded to a cold snap on the east coast by tweeting: “Brutal and Extended Cold Blast could shatter ALL RECORDS – Whatever happened to Global Warming?”

The president took a trip last week to see the aftermath of California’s deadliest ever wildfires, a phenomenon experts say is worsened by warming temperatures. During a visit to the town of Paradise, which was wiped out by the so-called Camp fire, Trump said he wanted “a great climate”. But he has largely blamed forest management for the blaze.

He has repeatedly disparaged or dismissed climate science in the past.

In a statement in response to the release of the climate assessment, the former vice-president and environmental campaigner Al Gore said: “The president may try to hide the truth, but his own scientists and experts have made it as stark and clear as possible.”