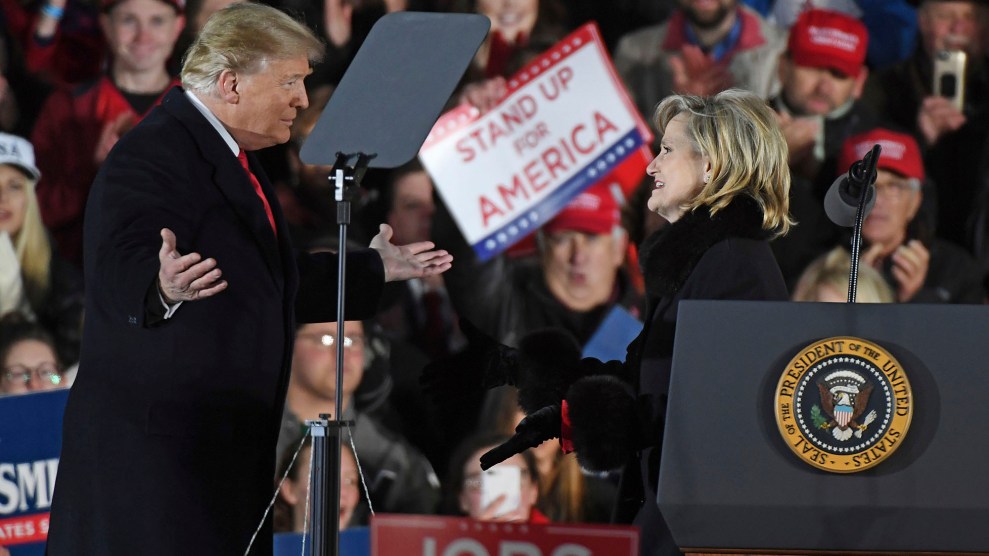 While President Donald Trump was in Mississippi to campaign for Sen. Cindy Hyde-Smith Monday, he was asked about US Border Patrol agents firing tear gas on a group of migrants, that included women and children, at the border yesterday.

“What did you think of the images of women and children running, tear gas?” the reporter asked, according to the pool report.

Trump responded first by asking, “why are they there?,” before insisting that the tear gas used was “very safe”—echoing claims made by a former top border control official earlier today, who said of the tear gas, “It’s natural. You can actually put it on your nachos and eat it. So, it’s a good way of deterring people without long-term harm.”That’s when things really went off the rails.

“Why is a parent running up into an area where they know the tear gas is forming and it’s going to be formed and they’re running up with a child. In some cases, you know, they’re not the parents. These are people, they call ’em grabbers. They grab a child because they think they’ll have a certain status by grabbing a child,” he said.

Trump was responding to an incident on Sunday, when a group of migrants protesting increasingly stringent border and asylum policies at the San Diego-Tijuana border ended in a clash with American forces. After some migrants charged the border, US agents fired tear gas to drive back protesters, some of whom were children.

BuzzFeed News published an interview with a woman who was photographed running away from the tear gas with her children in her arms. “I felt sad, I was scared. I wanted to cry. That’s when I grabbed my daughters and ran,” Meza told BuzzFeed News. “I thought my kids were going to die with me because of the gas we inhaled.”

This fear was echoed by Cindy Milla, another migrant who was targeted Sunday, in an interview with the Wall Street Journal. “I felt that my face was burning, and my baby fainted. I ran for my life and that of my children,” she said.

In a Facebook post Monday night, Department of Homeland Security Secretary Kirstjen Nielsen doubled down on Trump’s comments, despite a complete lack of evidence. “The caravan members are predominately male. It appears in some cases that the limited number of women and children in the caravan are being used by the organizers as ‘human shields’ when they confront law enforcement.”

“I ask parents to avoid violent caravan groups and refrain from attempts to illegally enter our country—these acts will put your children in danger.”

Trump’s comments came before his second rally of the day for Hyde-Smith, in Biloxi, Miss. During the rally, Trump took some time to boast about the strength of the Border Patrol, telling the crowd that the fence was made to be “very unfriendly-looking.”