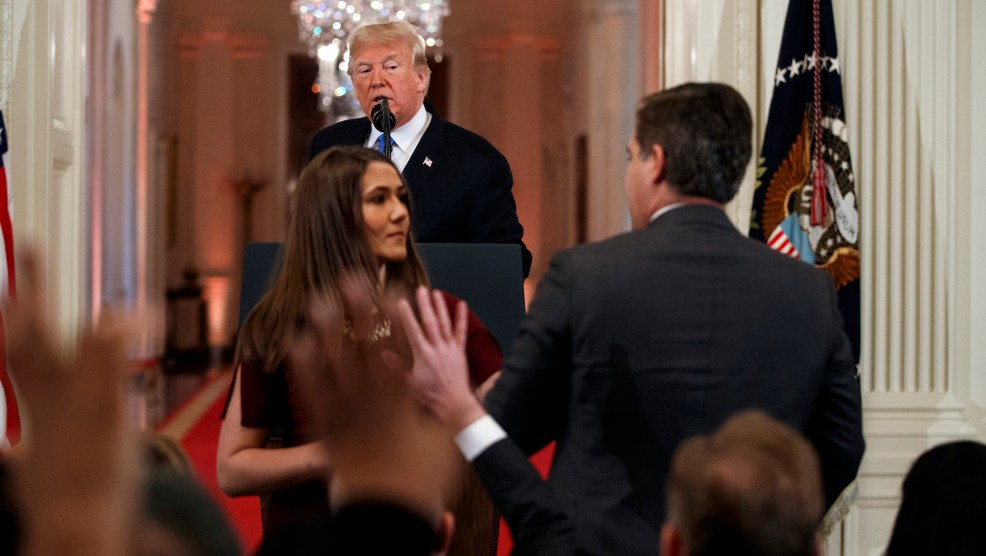 CNN journalist Jim Acosta had his White House press credentials revoked after refusing to give up the microphone during a press conference Wednesday.Evan Vucci/AP

On Wednesday, the White House suspended CNN reporter Jim Acosta for allegedly “placing his hands” on a female intern when she tried to take the microphone away from him during a heated spat with the president. That evening, White House Press Secretary Sarah Huckabee Sanders reaffirmed the decision to ban Acosta, writing in a tweet, “We stand by our decision to revoke this individual’s hard pass.” She added, “We will not tolerate the inappropriate behavior clearly documented in this video,” referring to footage in the tweet that appeared to be pulled from a C-SPAN clip of the incident.

The problem? The White House shared footage that had first been tweeted by a contributor to InfoWars, a right wing conspiracy news site, setting off a debate not only about the alleged incident but also about the nature of the footage that was being distributed.

We stand by our decision to revoke this individual’s hard pass. We will not tolerate the inappropriate behavior clearly documented in this video. pic.twitter.com/T8X1Ng912y

A side by side comparison shows that the video shared by Sanders is a sped-up version of the original that distorts Acosta’s contact with the intern. It appears that the footage being shared by the White House was originated by Paul Joseph Watson, a writer who is affiliated with the right-wing conspiracy news publication InfoWars.

The intern's reach for the mic is slowed down, and the "chop" motion is accelerated. Here's an annotated side by side comparison: pic.twitter.com/wLCG5GVdo1

Watson, however, categorically denies doctoring the video. He told BuzzFeed News that the video was “not edited—it’s just zoomed in.” He also explained that he took the original footage directly from a GIF posted to the Twitter account of the website the Daily Wire. Buzzfeed confirmed that the process of turning a video into a GIF does reduce quality in a way that appears to speed up the content, as Watson claimed was the case for his Tweet.

Here's the video that proves I did not "doctor" or "speed up" the Acosta video, as some media outlets claim. I merely zoomed in.

Nice try to distract from Acosta's behavior, but this kind of dishonesty is why the media has a massive trust issue.

Sanders’ post with the video has already collected more than 5 million views on Twitter. Watson’s post with the video has over 800,000 views on Facebook. Members of the press, including Acosta, have condemned the White House for sharing the footage that they consider to be doctored. The White House Correspondent’s Association has called for the White House to reverse its decision to ban Acosta, writing that the reaction was “out of line.” CNN’s vice president of communications and digital partnerships called Sanders’ “shameful” and the tweet “fake news.”

Don’t believe the lies coming from the WH. Believe in our freedoms. Thank you all for your support. We won’t back down. 🇺🇸 #1A

According to a Twitter spokesperson, the tweets do not put either account in violation of the company’s terms of service, which bar spamming or harassment. When asked if Twitter was investigating the video or Paul Joseph Watson’s account, the company declined to provide more information. The company referred Mother Jones to the same policies it has used to justify not removing tweets from the White House in the past. According to Twitter’s policies, “Blocking [world leaders’] accounts from Twitter or removing their controversial Tweets would hide important information people should be able to see and debate. It would also not silence that leader, but it would certainly hamper necessary discussion around their words and actions.” Twitter does not remove individual tweets though it can suspend or ban users if it deems them in violation of its policies.

InfoWars and its founder Alex Jones were banned from Twitter in September, and in October the platform suspended 18 more accounts that had been sharing content from the website. Unlike other InfoWars affiliates, Watson has never been permanently banned by Facebook or Twitter. Facebook tells Mother Jones that it has referred Watson’s video to its third-party fact-checkers for verification. If the video is deemed to be fake, Facebook will demote the video in News Feed. Facebook would not remove the video unless it was found in violation of the platform’s terms of service, the spokesperson said.

The White House did not respond for comment by deadline. We will update this post if C-SPAN and CNN respond to Mother Jones request for comment.