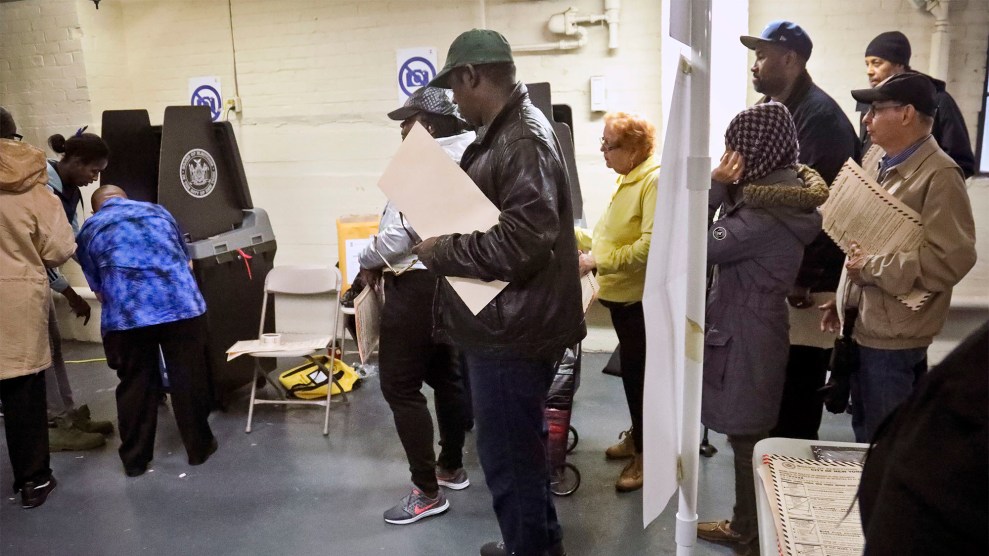 Polling site officials check on a voting scanner after it jammed Tuesday in Bronx. The jam forced voters to manually file their ballots until a repair was made. Bebeto Matthews/AP

Broken voting machines in New Jersey. Absentee ballots that never arrived in Florida. Voters being asked for the wrong forms of photo ID in Mississippi. A call center at a law firm in New York is fielding complaints from around the country of voting irregularities, and voters are reporting a wide range of barriers to voting in a midterm election that will determine control of Congress and the fate of President Donald Trump’s agenda.

More than 200 lawyers took calls from voters in Maryland, New Jersey, Florida, Mississippi, and parts of Texas and Michigan at the midtown law firm of Simpson Thacher & Bartlett—one of 20 call centers that are part of the massive Election Protection Coalition run by the Lawyers’ Committee for Civil Rights. The coalition, which includes more than 100 groups such as Common Cause and the NAACP, has 4,000 lawyers and 6,000 grassroots volunteers at call centers and in the field monitoring voting problems in 28 states on Election Day.

And they’ve been fielding an unprecedented number of calls for a midterm election. As of 11:30 Tuesday morning, they’d received 10,000 calls during the early-voting period and on Election Day. “The overarching theme is that none of these states were prepared for this level of turnout,” says John Bennett, a lawyer with the firm.

Lawyers in business attire sat at rows of desks on the 30th floor of the law firm near Grand Central Station, with expansive views of the foggy New York skyline. Their phones rang off the hook as the volunteers fielded calls from voters who were forced to wait in long lines, or didn’t see their names on the voter rolls, or didn’t know where their polling place was.

In several counties in New Jersey, voting machines malfunctioned and election officials ran out of emergency paper ballots. In Florida, the state didn’t mail absentee ballots to some voters who requested them. In Michigan, the state moved polling places and failed to notify voters of those changes.

“We’re seeing a lot of issues related to a lack of preparedness,” says Myrna Perez, director of the Brennan Center for Justice’s Voting Rights Project, who is helping oversee the call center. “Voting machines not working, long lines at the polls, poll workers giving out the wrong information, voters not registered on the rolls…What I find frustrating is that these are preventable problems.”

This call center fielded complaints from Maryland, New Jersey, Florida, Mississippi, Texas, and Michigan, but there were widespread reports of voting problems elsewhere on Tuesday. In Georgia, voters in heavily African American precincts waited in lines of up to four-and-a-half hours because voting machines weren’t plugged in. In New York, there were long lines and complaints of voting machines malfunctioning. In North Dakota, Native American voters in at least one county were told their tribal IDs weren’t acceptable identification. In Arizona and Indiana, polling sites opened late. In Missouri, some voters were wrongly asked to show photo ID when they voted. In Alabama, 300,000 voters were listed as inactive and some wrongly given provisional ballots.

Twenty-four states controlled by Republicans have imposed new voting restrictions since the 2010 election. Some of these laws are likely contributing to problems and confusion on Election Day.