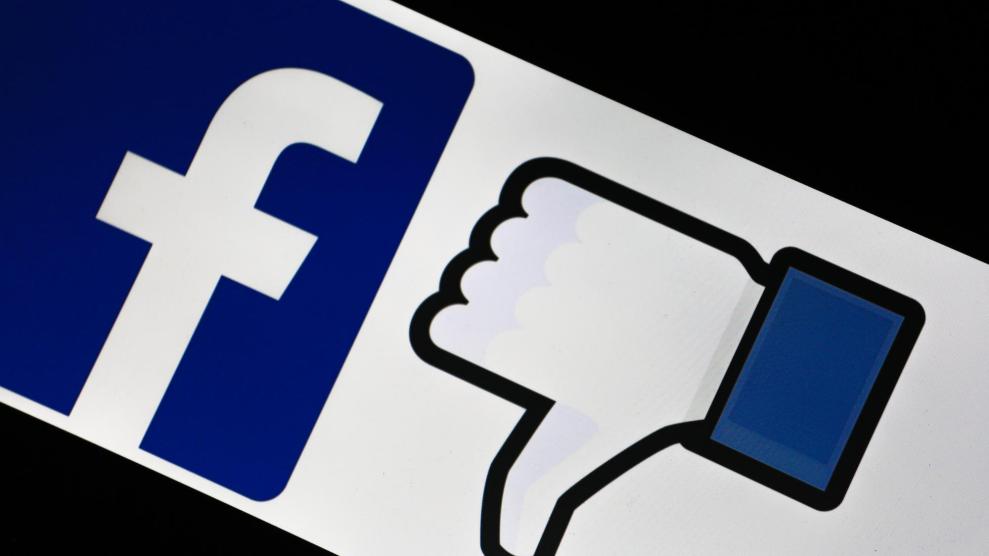 A day after outside research groups released two bombshell reports about Facebook’s and Twitter’s failures to respond to Russian disinformation efforts targeting minority communities before and after the 2016 election, Facebook has released an update to an internal civil right audit. But civil rights groups, many of which were calling for an audit years before Facebook committed to one in May, are fed up with Facebook’s lack of progress at fighting discrimination on its platform.

“The fact of the matter is that Russians seemed to know more about black people than Facebook,” Color of Change Director Rashad Robinson, who met with Facebook leadership Tuesday morning to discuss the audit, tells Mother Jones.

“Facebook has done little to meaningfully address the bigotry and discrimination that pervades its platform,” Madihha Ahussain, special counsel at Muslim Advocates, wrote in a statement to Mother Jones. “Sheryl Sandberg’s introduction indicates a lack of understanding that, after years and years of abuse, significant reforms are urgently needed now.”

The New York Times revealed in November that Color of Change, one of Facebook’s most prominent civil rights critics, had been the target of a conservative opposition research group employed by Facebook. While Facebook quickly terminated its relationship with the firm, the involvement of Facebook’s senior leadership in the scandal prompted renewed calls for accountability at Facebook. After Facebook COO Sheryl Sandberg met with Color of Change in late November, the company committed to publicly releasing a report by the end of the year. But advocates say the scant update that Facebook put out Tuesday morning doesn’t cut it.

“Facebook has done little to meaningfully address the bigotry and discrimination that pervades its platform.”

“This report is long on excuses and short on meaningful progress,” Color of Change wrote in a statement following the update. “It is not enough to merely identify the many challenges that we have explained to Facebook. It is hard to take seriously a paper-thin promise without a timeline, benchmarks, or accountability mechanism.”

On Tuesday, 30 groups, including Muslim Advocates, also called for the resignations of Sandberg and Facebook CEO and Chairman Mark Zuckerberg from their positions on the company’s board. The letter also called for the removal of Facebook Vice President of Public Policy Joel Kaplan, a demand Color of Change has also made.

“You plead ignorance, that you had no idea that this was happening,” the groups wrote to Zuckerberg in a letter addressed to the Facebook board. “But the public has given your company the benefit of the doubt for far too long and ignorance is no longer an excuse. It’s become abundantly clear that, as currently constituted, your leadership team is unable to adequately address the valid concerns of the civil rights community.”

As Mother Jones reported in November, Laura Murphy, the civil rights advocate leading the audit, has interviewed nearly a 100 groups for their input. At the time, the company pointed to its election efforts to combat voter suppression as one concrete example of the results of the audit, which Tuesday’s update reiterated.

No information has been made public about what the results of those efforts actually looked like, and advocates involved say there were problems with Facebook’s efforts around voter suppression. “There was a kind of automatic reaction to wanting to also have that war room trained on fraud, which is the very justification for a lot of other suppression efforts,” Vanita Gupta, president and CEO of the Leadership Conference on Civil and Human Rights, told Mother Jones.

“The public has given your company the benefit of the doubt for far too long and ignorance is no longer an excuse.”

“Facebook has much work to do to restore public faith in the company and reduce the civil rights harm its platform enables,” Gupta said in reaction to Tuesday’s update. “We look forward to seeing real progress on these issues and for Facebook to reply to the concerns we, along with Color of Change, raised in November.”

Tuesday’s update also addressed Facebook’s longstanding problems with discrimination in its advertising practices. In August, the Department of Housing and Urban Development cited the company for violating the Fair Housing Act as recently as late July, despite promises to curb the behavior. According to the new report, in August, Facebook removed 5,000 additional advertising targeting options, but that “much more progress needs to be made.” The report says Facebook is also expanding its “non-discrimination” to all US advertisers.

According to the audit, 2019 priorities for the company include a more transparent approach to content moderation and building out “an appropriate infrastructure to ensure that the changes it is making are systemic—and that civil rights issues are considered  ‘on the front end’ as Facebook develops new products, features, and policies.” Robinson says Facebook has also committed to addressing issues with its relationship with police organizations. Color of Change and other groups, including the NAACP, are also calling for lawmakers to intervene.

Despite calls from other civil rights groups, Robinson says Color of Change will not call for Zuckerberg and Sandberg to step down from Facebook while the group has “clear demands on the table” in front of the executives. Facebook said it will release another update on its audit in six months.

“We now have a benchmark to judge in the next six months what they’re doing,” says Robinson. “What this really shows is that civil rights were not the priority for Facebook this past year.”

Update (12/18/18, 3:10 pm): After publication, a Facebook spokesperson responded to Mother Jones, writing that “As Laura [Murphy] indicated in her report, this work is ongoing, and we will continue to provide updates as the audit proceeds.”