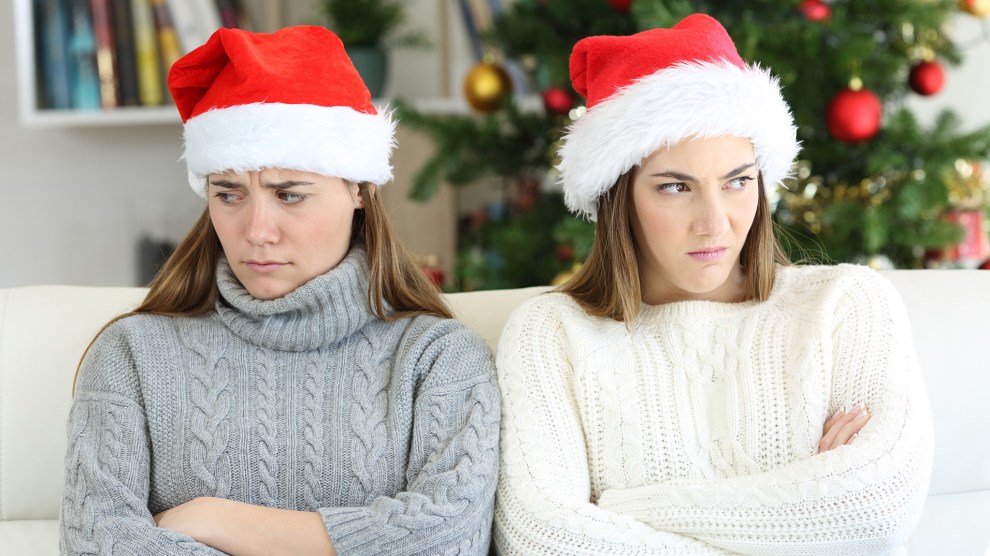 It’s the time of year when families mingle, for all that entails, so we reached out to readers to ask how political differences among relatives have affected their holidays. Specifically, we asked whether anyone had kept quiet about their midterm votes in order to keep the peace with dissenting family members.

The overwhelming response, via Facebook and our online submission form, was “Nope!” Nobody’s hiding—not anymore. But the blue-red divide, egged on by President Donald Trump’s relentlessly divisive rhetoric, has put a serious crimp on family harmony.

Some readers have banned political talk from the holiday table. (Seems a shame, doesn’t it, that we can no longer engage in civil conversation?) Others have disowned, or have been disowned by, parents or siblings—unfriended on social media and uninvited to family get-togethers. The breaking point, in many instances, was family differences over Trump.

“I had to listen to a family member rant about how evil George Soros is destroying America. I now have permanent bite marks on my tongue.” —Melissa

“When a few lone reds showed up for a family event, they were warned—no politics, no religion.”

“After turning the Thanksgiving Dinner over to my niece, it became eat and then go outside to a set-up gun display on a long table, and a brag-fest on guns and shooting. Who needs that? This political cycle has revealed the nature of some relatives that I no longer wish to have any contact [with]. I thankfully again have my own dinner and enjoy peace.” —Pam

“I just never invite them. After 2016, I told them, ‘You are dead to me, Fredo,’ and asked them if they wanted to go fishing instead.” —David

“My mother blocked me on Facebook because she voted for dipshit and would rather I not express my own opinion (at almost 40 years old), so that’s pretty much that.” —Nichole

“I don’t have many close family [who are] red. When a few lone reds showed up for a family event, they were warned—no politics, no religion—or they would be asked to leave. They complied.” —Linda

“I just smile and remind them that they are at my house and if it were not for the ACA [Affordable Care Act], they would be eating at Bob Evans. The ACA literally saved my life.” —Pamela

“When the men start bitching about liberals, I leave. I just get up and leave.”

“I’m staying home this year. As I did last year. I miss my family, but I can’t EVEN. 😢 I vote blue, they vote red…We never talk politics. We’re far too polite. It’s having to watch the racist, homophobic comedian on TV after dinner because my aunt loves him. It’s listening to my dad tell everyone how his ancestors treated “their darkies” very well because they were so high class. It’s the waitress at the Waffle House giving me stink eye when she hears my Yankee accent. It’s never being able to talk safely and freely about my personal or romantic life. So many small wounds.” —Barbara

“When the men start bitching about liberals, I leave. I just get up and leave. I have zero problem leaving right in the middle of eating…I expected the men in my family to stand up for the women. Many chose not to do that. I have no problem not dealing with their complete lack of support when they complain they are not the center of the universe and really expect to be.” —Terese

“I guess you come to a certain age where you don’t have to deal with people’s bullshit. Everybody is invited to the table, everybody is welcome, but yet the drama they bring is not. So now, after all those years, we just all hang out with people who we truly want to be with.” —Rita

“I’m disappointed in them because I honestly don’t think they are really thinking and investigating the issues. That being said, I love them all the same, because I’ll be damned if I let the GOP screw up my relationship with my friends and family.” —John

Other readers—surprise, all Democrats—chimed in with more detail via our web form. Their responses are edited lightly for grammar and clarity, starting with this look-back, which addressed our original question…

“One of my sisters unfriended me on Facebook. Her problem. Not mine.”

“My great-aunt and uncle were your classic Navy family. He was a commissioned officer until he retired, she was a Pentagon secretary. He was the sort everyone said would vote for the devil if he ran as a Republican. She never argued with or contradicted him on anything political that anyone in the family could ever remember, so everyone just assumed she was right there with him. Both lived very long lives, but he passed away before she did, and it turned out that she had been a pretty reliable Democratic voter her whole life and no one had any idea because she just kept it to herself while her husband was alive.” —Ryan, 39, Milwaukee, Wisconsin

“Straight Democratic. Didn’t hide my preferences from anyone. My family knows I demonstrated against the war in Vietnam. And voted against the Bushes. One of my sisters unfriended me on Facebook. Her problem. Not mine.” —Josephine, 79, Linwood, Pennsylvania

“I voted straight Democrat. In contests where it was a Republican and an independent, I voted for the independent. My family in general votes Democrat and my choices wouldn’t surprise them at all. Except my dad, who gets his news from extreme right-wing sites. He got it into his head that I’m a Republican because I am not a caricature of the liberal that appears on those sites. I simply tell him that Democrats say anything you want if you make up the examples. He doesn’t like being challenged like that, but it’s true. His examples don’t exist in the real world.” —Joseph, 39, Brawley, California

“I don’t think my dad has a thought that didn’t originate with Tucker Carlson or Sean Hannity.”

“I voted Democrat. Just like every election since 1994. My wife is also a liberal. Our parents, on the other hand, are Trump supporters. You know, the type that get Social Security and Medicare and then whine about welfare recipients. I don’t think my dad has a thought that didn’t originate with Tucker Carlson or Sean Hannity. That is why we don’t go to family functions anymore. Every single time they get together it’s like a Klan meeting. I’m not embarrassed to tell people how I voted. I am, however, embarrassed to tell people I am part of that family.” —Anonymous, 40, Decatur, Illinois

“I’m a Democrat and thank goodness my husband is. However, I have four siblings that are all Trump lovers. They post borderline racist things on Facebook. It makes me nuts. I have learned not to post political things on Facebook. And to me, this is worse—90 percent [of the people] on my friends list are Republicans. My son-in-law is black; we are white. I have two mixed granddaughters. It upsets me to know there are that many racist people. My siblings say they aren’t racist, but they are. Too many ‘Save our Civil War statues,’ ‘Trump is doing a great job.’ How can they say that? Yesterday, my brother had this on Facebook: ‘Why do people hyphenate American, we are all American.’ I asked what he meant. My sister jumped on me and said, ‘He means like Mexican-American.’ Ha! Right. He means like African Americans. I am glad we don’t live in the same state and I haven’t been with all of them since my mom died three years ago. I make excuses.” —Anonymous, 60, Clarksville, Arkansas

“Voting is supposed to be a personal choice. That’s why we do it in a booth.” —Carol, 60, Richmond, Texas