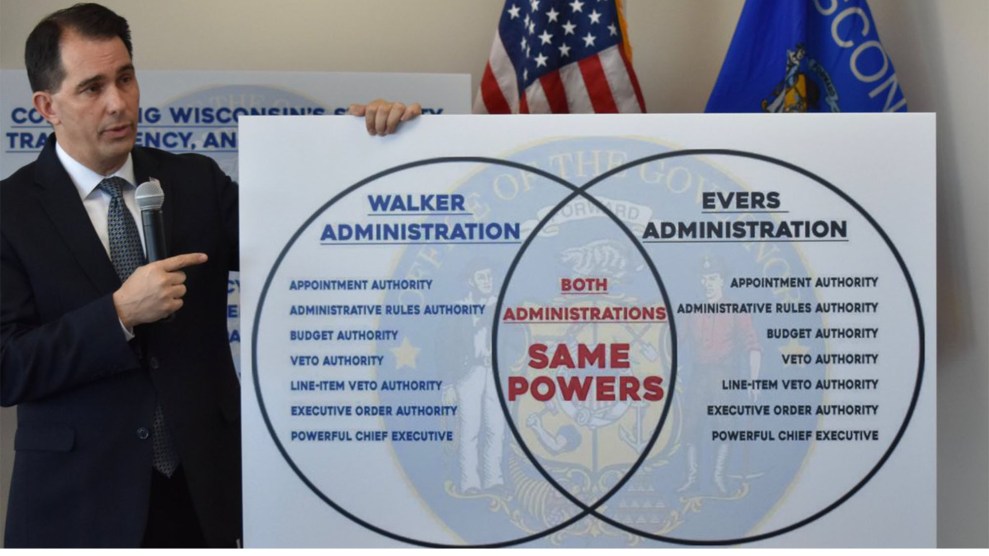 Voting rights groups filed a lawsuit Monday to block voting restrictions passed by Wisconsin Republicans in a lame-duck session this month before a Democratic governor takes office in January.

The legislation limits Wisconsin’s early voting period to two weeks. Currently, Wisconsin counties can decide when to begin early voting, and Democratic-leaning cities like Madison and Milwaukee allowed six weeks of early voting in 2018, contributing to record turnout for a midterm election.

The lawsuit was filed by the National Redistricting Foundation, a nonprofit founded by former attorney general Eric Holder, and One Wisconsin Institute, a Madison-based progressive advocacy group. The suit charges that the new law was passed by the Republican-controlled Legislature “as part of a partisan attempt to retain and regain power” and violates a 2016 ruling by a federal judge striking down previous cutbacks to early voting in 2016. In a statement, Holder called the new law “grossly partisan, deeply undemocratic, and an attack on voting rights.”

We will sue to stop Wisconsin Republicans from undermining our democracy. https://t.co/0CAkmWYWvX

In 2014, Wisconsin’s Legislature cut early voting from 30 days to 12, reduced early voting hours on nights and weekends, and restricted early voting to one location per municipality, hampering voters in large urban areas. A federal judge ruled in 2016 that the early voting cuts “intentionally discriminate on the basis of race” and had been passed “to suppress the reliably Democratic vote of Milwaukee’s African Americans.” (That ruling has been appealed to the Seventh Circuit Court of Appeals.)

Wisconsin Republicans admitted that the early voting restrictions passed in 2014 were intended to benefit their party. Glenn Grothman, then a Republican state senator, said of extended early voting hours in heavily Democratic cities like Madison and Milwaukee, “I want to nip this in the bud before too many other cities get on board.” The county clerk of conservative Waukesha County said early voting gave “too much access” to voters in Milwaukee and Madison.

“The same partisan and racial motivations underlying the previous state-imposed early voting limitations—motivations that this Court found to be unconstitutional and intentionally discriminatory—visibly drove the passage of [the new law],” the groups behind the lawsuit said in their filing.

This is also the latest in a series of efforts by Wisconsin Republicans to weaken voting rights. The redistricting maps passed by Wisconsin Republicans in 2011 are among the most gerrymandered in the country: Republican assembly candidates received 46 percent of statewide votes in 2018 but retained 64 percent of legislative seats. And Wisconsin’s voter ID law, which first went into effect in 2016, disenfranchised tens of thousands of disproportionately Democratic-leaning voters and helped President Donald Trump carry the state.