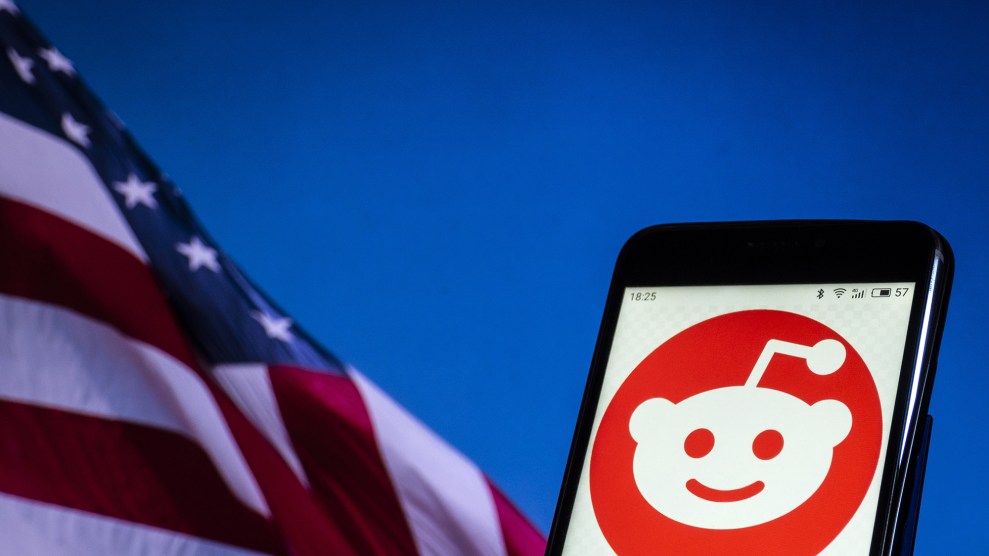 For years, Reddit’s most popular libertarian board, r/Libertarian, eschewed formal moderation in a bid to stay true to its ideology’s anything-goes ethos. But over the course of the last several weeks, Reddit users with a history of advocating white supremacy and state authoritarianism took advantage of the open, un-policed nature of the Libertarian subreddit to make it their own.

Longtime users believe the moves are part of a far-right digital coup.

The new cadre of moderators have swiftly instituted strict rules they say are necessary to keep out trolls, undertaking mass bans of dissenting users. While the new moderators have written that they’re banning liberals and leftists whose positions are counter to the group’s, longtime libertarian users of the group say they’ve been caught up and believe the moves are part of a far-right digital coup targeting r/Libertarian.

Some users are still pushing back against the leadership changes. But if the takeover is successful, it would give far-right users control of the largest libertarian subreddit, whose 261,000 subscribers make it one of the internet’s most popular libertarian communities.

The moderators’ changes came two weeks ago, after a group of leftists users from the r/ChapoTrapHouse podcast subreddit had allegedly “brigaded” r/Libertarian. (“Brigading” is a Reddit term for when outside users come into a group to troll it by downvoting posts.) One of r/Libertarian’s moderators, Reddit user rightc0ast, and new moderators that rightc0ast brought on between December 6 and 7, argued that they needed to tighten the group’s laissez-faire rules to protect it from outside trolling.

“Hello, /r/Libertarian,” new moderator JobDestroyer wrote on December 8 in a now-removed post announcing the new rules. “We are implementing a massive overhaul of the existing rules system. There are many reasons for this.”

In the post, JobDestroyer detailed a list of new restrictions barring trolling and “off-topic” conversations, and threatened to ban anyone believed to be posing as a libertarian, but were secretly on the left.

“We are implementing a massive overhaul of the existing rules.”

The subreddit’s users, along with posters in other libertarian subreddits like r/LibertarianUncensored and r/LibertarianPartyUSA, immediately decried the changes as a departure from libertarian ethos while calling attention to the background of users behind the change. Most of the five new moderators have a posting history showing them taking part in r/The_Donald, an infamous pro-Trump subreddit, and r/Physical_Removal, a subreddit dedicated to the idea of eventually forcibly removing liberals and leftists from society that was banned in 2017 for “posting content that incites violence.” Two of the moderators who helped engineer the changes—one has since been removed—had previously voiced support for the regime of Chilean dictator Augusto Pinochet and debated the merits of fascism.

Rightc0ast, who played a key role in taking over the group by inviting new allied moderators, has a particularly troubling trail of posts across Reddit. In August 2017, Rightc0ast promoted the then-upcoming Unite The Right white supremacist protests in Charlottesville, Virginia. The white nationalist provocateur has also backed the idea of an ethnostate and supported the Fash The Nation podcast, which was created by a neo-Nazi blog. On Reddit, he was a moderator of r/The_Donald and a moderator of r/Physical_Removal.

Although before the changes the subreddit had been, for all intents and purposes, unmoderated, there were still several users on file as moderators who did not act on user requests to remove content or ban users. Rightc0ast has been one of these moderators since 2010. Last year, some members of the group lobbied for the account to be removed from the position because of the user’s association with fascist, far-right, and hate subreddits. After some debate, rightc0ast ultimately remained as a moderator, but kept a low profile until after the alleged Chapo brigading. (Members of the Chapo subreddit have disputed whether such an attack was actually launched from their board.)

The platform had initially avoided taking aggressive steps to clamp down on hate speech, even as more mainstream sites like Facebook, YouTube, and Twitter moved to purge racists. Reddit finally announced in October 2017 that it would take stricter actions against content that incites violence, leading to the closure of several far-right groups. The site long has been home to alt-right groups espousing hate and endorsing violence, such as r/MillionDollarExtreme and r/TheGreatAwakening, both of which Reddit ultimately banned. Users and moderators who used such groups have flocked to other subreddits like r/The_Donald, r/CringeAnarchy, and others, where they continue to pump out hate content.

“There’s a feeling of disenfranchisement…that helps pull people into extremism.”

Rishab Nithyanand, a professor at the University of Iowa who has researched far-right extremism on Reddit, says he’s observed banned groups simply refocus their efforts elsewhere on the platform.

“Banning subreddits does slow them down a decent amount. As soon as this happens though, we’ve seen in the past that these subreddits evolved and become something else or move to a new location,” Nithyanand says. “This only slows them down, and doesn’t make them go away. While they lose their non-active audience, the core moves, and they’re able to continue their behavior.”

“I don’t know what actions can be taken to stop this,” he says, “and I’m not sure how much action [there] should be.”

Reddit says it’s working against users who violate its policies, but that it had no specific policy banning moderators of banned subreddits from continuing to moderate elsewhere. The company did point to research which suggests that banning groups might improve their participants’ behavior as they’re forced to move to new subreddits.

“We are very clear in our site-wide policies on the behaviors that are prohibited on Reddit including content that encourages or incites violence, threatens, harasses, or bullies,” a Reddit spokeswoman told Mother Jones in an email. “If a user or a subreddit is in violation of these policies then we will pursue appropriate enforcement actions. Moderators of banned communities are evaluated on a case by case basis.”

Exactly why rightc0ast, who did not respond to Mother Jones‘ requests to comment, and company have taken over the group isn’t clear. Supposed screenshots of leaked messages between r/Libertarian’s new moderators show discussion of plans to shift the group’s discourse toward right-libertarian ideology, pushing out other groups like left-libertarians and socialist-libertarians. And in a 2017 Discord chat associated with the r/Physical_Removal subreddit reviewed by Mother Jones, rightc0ast defended his own online recruitment on 4chan, an internet message board known as a hotbed of hate speech, of sympathetic minds to far-right ideologies.

“Giving up on halfchan is a mistake. It’s a recruiting ground. One more active, and receptive than ever. Once in a while I pop in and participate in the red pill threads,” rightc0ast wrote; “red pill” is an internet term that usually means moving someone toward far-right and extremist ideologies.

“It’s a recruiting ground…I pop in and participate in the red pill threads.”

“The_Donald and /pol/ are still full of eager to learn whites looking for doors,” rightc0ast continued. “It’s not everyone’s thing, but discouraging people from [going] is about the most cucked thing someone can do. Literally may as well be the Jew.”

The battle over r/Libertarian, and the prospect that it could become newly receptive to far-right ideas, highlights the internet’s so-called libertarian to far-right pipeline. Writers like Robert Evans at Bellingcat have documented how many online fascists reference going through “libertarian phases” on their way to the far right. Robert Bowers, the shooter who killed 11 in a Pittsburgh synagogue in October, posted memes about being a libertarian before moving to deeper far-right positions.

Other writers have also covered the trend among prominent far-right internet figures including Stefan Molyneaux, who came to prominence as a libertarian before tacking further right toward white supremacy and ethnonationalism, and Gavin McInnes, who claims to be a libertarian but founded the fringe alt-right group the Proud Boys. (He has recently taken steps to distance himself from the group.)

“The paleo-libertarian seed that Ron Paul, Murray Rothbard, and Lew Rockwell planted in the 1990s has come to bear some really ugly fruit in the last couple of years as elements of the alt-right have made appearances in various libertarian organizations and venues,” economist Steve Horowitz wrote in a post on Bleeding Heart Libertarians in 2017.

Nithyanand explained that the pipeline is fueled by libertarianism’s position on the outside of mainstream politics. Liberalism and conservatives have the Democrats and the Republicans, corresponding, dominant political parties. Libertarians have no such equivalent, which Nithyanand said can lead to adherents having frustrated feelings of alienation.

“We’ve seen this happen in very similar ways many times.”

“If you look at things like the men’s rights movement, there’s a feeling of disenfranchisement from the mainstream, and that helps pull people into extremism,” he said, referring to the misogynistic internet movement predicated on marginalizing women. “Libertarians don’t really have a voice in the current political theater. This makes them ripe for an ideological pipeline.”

Some Reddit users, including Prince_Kropotkin, a prominent anarchist user of the platform who has followed developments on r/Libertarian closely, warns that the new far-right control of the subreddit will ruin it. “Unfortunately, we’ve seen this happen in very similar ways many times, and it tends to end up with swastikas adorning the subreddit,” he said in a chat message.

Users of r/Libertarian have said that, since Trump’s victory in the 2016 election, their subreddit had already seen an uptick in spammy, far-right, polemic posts unrelated to libertarianism. In the end, a power shift in the subreddit may have been inevitable given the group’s lack of moderation and its ideological seat adjacent the far right.