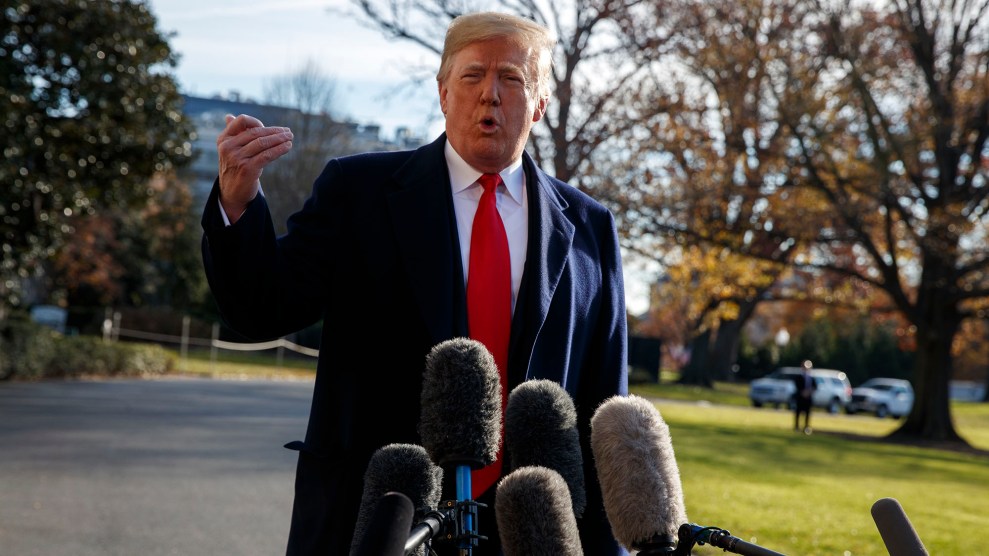 President Donald Trump announces that he is nominating William Barr, attorney general under President George H.W. Bush, as his attorney general, on the South Lawn of the White House on Friday.Evan Vucci/AP

President Donald Trump will nominate William Barr, known in the 1990s as an advocate for expansive presidential power and a skeptic of independent counsels to investigate the president, to be the next attorney general. Barr previously held the position under President George H.W. Bush.

If confirmed, Barr would oversee special counsel Robert Mueller’s investigation, and he will face tough questions about the investigation during his confirmation hearing. When Barr was nominated for this same position in 1991, at the age of 41, he was already a known advocate for presidential power—a trait that Trump also sought out in Supreme Court appointee Brett Kavanaugh.

The announcement ends speculation that Trump would allow acting Attorney General Matthew Whitaker to hold the position for an extended period of time.

Barr worked for the CIA under then-director Bush and on the White House domestic policy staff under Ronald Reagan and then rapidly rose through the ranks of the Justice Department under President Bush. When he underwent confirmation hearings in 1989 to lead the Office of Legal Counsel at the Justice Department, he testified that he “‘entertained doubts’ about whether the post-Watergate independent counsel statute violated the Constitution by impinging on the president’s power,” according to a 1991 Washington Post report. But he added that he accepted the Supreme Court’s ruling upholding it.

As OLC chief, he provided legal reasoning used by the administration to justify the invasion of Panama and the arrest of Manuel Antonio Noriega. He also wrote an opinion that states the administration has the power to arrest terrorists overseas, even in violation of international law.

After he became deputy attorney general in May 1990, Barr advised Bush that he had the legal authority to wage war against Iraq without obtaining Congress’s consent. At the same time, however, he encouraged the president to seek a congressional resolution of support, saying it would put Bush in a stronger position, according to “The Commanders,” a book by Washington Post assistant managing editor Bob Woodward.