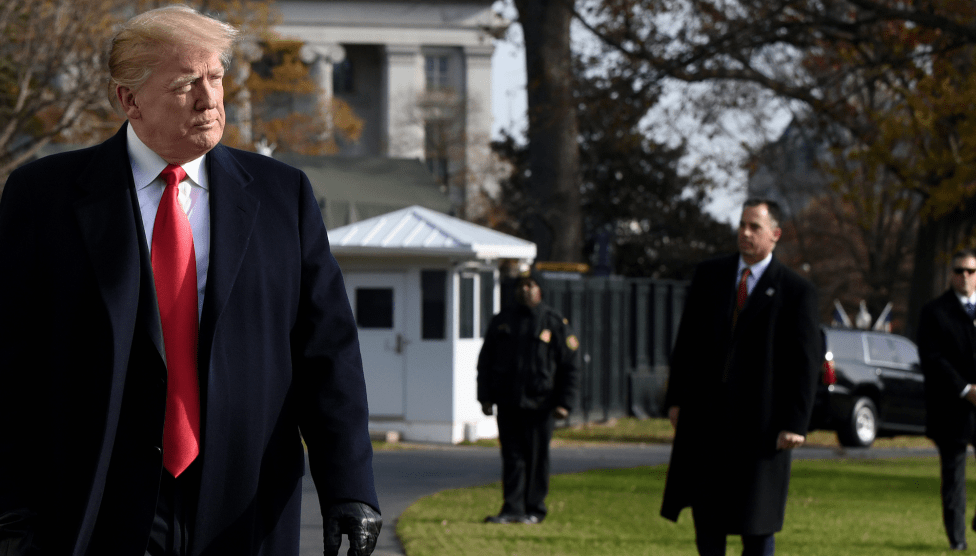 President Donald Trump lashed out at the renewed focus that he may have committed campaign finance violations by personally directing hush-money payments prosecutors have identified as criminal to influence the 2016 election, claiming in a pair of typo-ridden tweets Monday morning that the money was nothing more than a “simple private transaction.”

Trump also cited Fox News to assert that lawmakers were going after the payments because they had failed to find evidence of collusion between his campaign and Russia.

“Democrats can’t find a Smocking Gun tying the Trump campaign to Russia after James Comey’s testimony. No Smocking Gun…No Collusion.” @FoxNews That’s because there was NO COLLUSION. So now the Dems go to a simple private transaction, wrongly call it a campaign contribution,…

….which it was not (but even if it was, it is only a CIVIL CASE, like Obama’s – but it was done correctly by a lawyer and there would not even be a fine. Lawyer’s liability if he made a mistake, not me). Cohen just trying to get his sentence reduced. WITCH HUNT!

The tweets came as Democrats, including Rep. Adam Schiff, raised the possibility over the weekend that the president could be indicted after federal prosecutors concluded in an explosive filing Friday that Trump had directed his former personal attorney to make payments to silence two women from publicly speaking about alleged affairs with the president.

“My takeaway is there’s a very real prospect that on the day Donald Trump leaves office the Justice Department may indict him, that he may be the first president in quite some time to face the real prospect of jail time,” Schiff told CBS’s Face the Nation on Sunday.

.@AdamSchiff on the Russia Investigation: My takeaway is there's a very real prospect that on the day Donald Trump leaves office the justice department may indict him. That he may be the first president in quite some time to face the real prospect of jail time. pic.twitter.com/3kfwumFkh7

Rep. Jerry Nadler, the incoming chairman of the House Judiciary Committee, on Sunday said that if federal prosecutors’ accusations were true, the payments proved Trump “was at the center of several massive frauds against the American people.”

“They would be impeachable offenses,” he told CNN. “Whether they’re important enough to justify an impeachment is a different question.”

The tweets, including the typos, were roundly criticized, with many saying they demonstrated the president’s increasing panic over the various investigations into his campaign:

No, the criminal campaign-finance violations were found by professional line prosecutors in a Republican-controlled United States Department of Justice. It looks like a pretty good case. Kudos to them. https://t.co/PrtXErjcVI

Whenever you send out such inane tweets, I take great solace in knowing that you realize how much trouble you are in & how impossible it will be for you to escape American justice. Mostly, I am relieved that you will never have the opportunity to run for public office again. https://t.co/JzB6YH8C6H

On Sunday, the New York Times reported federal prosecutors are now focusing their investigation on what other Trump Organization executives may have known about the illegal campaign contributions.