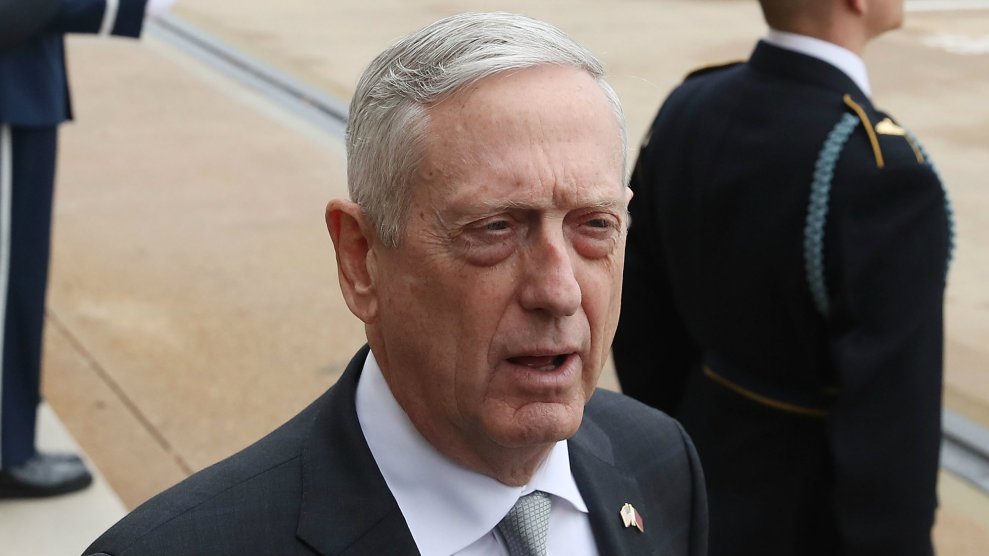 Less than 12 hours after the White House confirmed reports that President Donald Trump had dinner with Russian President Vladimir Putin, the Pentagon’s highest-ranking official accused Russia of attempting to interfere in the midterm elections.

At the Reagan National Defense Forum in California on Saturday, Defense Secretary James Mattis called Putin “a slow learner” who “tried again to muck around in our elections.” Without offering details, Mattis added that the Russian autocrat had continued “to try to subvert democratic processes.”

The extraordinary allegation from a key member of Trump’s national security team was not immediately backed up by any public evidence or confirmed by other federal agencies. A spokesperson for the Department of Homeland Security declined to comment on the record about Mattis’ comments. Army Lt. Col. Michelle L. Baldanza, a Pentagon spokesperson, said in an email, “I don’t have anything to add to the secretary’s remarks.”

The Kremlin conducted a massive interference campaign in 2016 that included the weaponized release of stolen emails, the spread of disinformation on social media, and attempts to target voting infrastructure in at least 21 states. This time around, government officials have suggested Russian malfeasance was slightly less aggressive than what Putin reportedly set in motion for 2016. In August, FBI Director Christopher Wray said Russian efforts during the midterms were focused more on “malign influence operations” as opposed to “efforts to specifically target election infrastructure.”

The lack of specificity from Mattis in describing the Russian actions as an attempt to “muck around” could be anything, from events that have already been publicized by lawmakers to high-level threats that have yet to be disclosed.

There have been some previous examples of Russian interference. In the midst of a tight reelection fight in Missouri that she would eventually lose, Missouri Sen. Claire McCaskill said Russian hackers attempted to penetrate her office computer network. Sen. Jeanne Shaheen (D-N.H.), whose term does not end until 2020, said members of her staff received suspicious scam emails that appeared to be phishing attempts. Most notably, Sen. Bill Nelson (D-Fla.) claimed several times in August that Russia had gained access to electoral infrastructure in Florida—however, his claims lacked any hard evidence and were given “four Pinocchios” by the Washington Post Fact Checker.

Without explicit details, nothing concrete can be divined from Mattis’ brief comments, but they are telling given what Special Counsel Robert Mueller has already revealed about Russia’s hacking apparatus in 2016. The 12 intelligence officers accused of accessing key Democratic files, including the emails of Hillary Clinton campaign chairman John Podesta, were members of the GRU, a state intelligence agency that is part of the Russian military. So, if Russia’s military did play any role in hacking efforts this year, Mattis would likely be one of the first American officials to know.