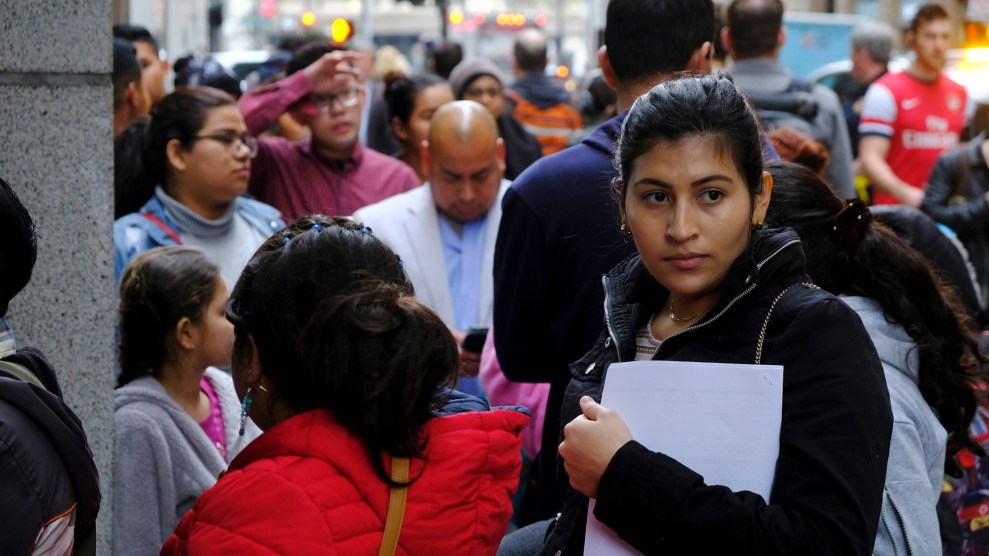 Hundreds of people overflow onto the sidewalk in a line snaking around the block outside a US immigration office in San Francisco. Eric Risberg/AP Photo

When immigration lawyer Christina Reggio arrived at San Francisco’s immigration court around 8:30 on Thursday morning, she found chaos. A long line of men, women, and children stretched down the block, many of them holding court papers and wondering what to do. Reggio was meeting her client, a 17-year-old living in nearby San Mateo, for what was supposed to be her initial appearance in court for deportation proceedings. But when they went inside after waiting in the long line, Reggio found out that the court had no record of her client. Instead, they were told to wait in another line for a piece of paper verifying that the client had shown up to court that day, and wait to be issued a date for a later hearing.

Many other immigrants were stuck in almost the same confusing situation on Thursday. Lawyers say it’s just the latest example of the Department of Homeland Security issuing fake dates for immigrants to appear in court—people received notices to appear on January 31, for instance, only to be told the system had no record of them.

Attorneys across the country have been seeing these notices with fake dates since the summer, according to Laura Lynch, senior policy counsel at the American Immigration Lawyers Association (AILA). Before then, immigration officials would often give immigrants notices to appear with the date listed as “TBD,” then coordinate with the court’s schedule to set a time for the hearing later. But in June 2018, the Supreme Court ruled against this practice in Pereira v. Sessions, saying the government has to provide immigrants with a real court date in the notice to appear.

In the months after that decision, Lynch says lawyers began reporting notices to appear for deportation proceedings with dates that were clearly wrong—for example, people were told to show up on dates that didn’t exist, like September 31, or instructed to appear at midnight when the court was closed. In other instances, immigrants would be given a real date, but when they arrived they’d find that DHS hadn’t told the court to expect them that day. In many cases, the fake dates seem to have been assigned in large batches—lawyers previously reported hundreds of fake hearing dates on October 31, 2018, says Lynch, who described the practice as a way to “circumvent the Supreme Court’s ruling.”

That’s what happened on Thursday, Lynch says, in jurisdictions ranging from Atlanta to Omaha. It wasn’t immediately clear how many cases were affected, but Lynch says her office heard hundreds of reports from attorneys about fake hearing dates on January 31. Though some lawyers were able to call in advance and find out that their clients didn’t actually have to show up Thursday, the government shutdown made it more difficult to figure that out—and many immigrants without lawyers had no idea what was going on.

“It’s obviously a logistical mess,” says Dana Leigh Marks, the former president of the National Association of Immigration Judges. “It’s very unfortunate that this occurred in the week we’re coming back to face the chaos that was created by the shutdown.” (Marks spoke as a representative of the judges union and not on behalf of the Justice Department.)

By mid-morning Thursday, the line outside the San Francisco court had mostly disappeared, though some immigrants with fake dates reported being asked to come back later in the day. Outside a nearby coffee shop, 15-year-old Edgardo Ayala waited with his father, mother, and two younger brothers to enter the court. The whole family had traveled three hours from Sacramento for Edgardo’s court date, only to find out that he didn’t have a hearing scheduled. Edgardo’s father said he’d had to take time off from his job as a welder for his son’s hearing, and the three boys had all missed a day of school. They were waiting until they could reenter the court to get a document verifying that Edgardo had appeared at the courthouse. When I reached Edgardo again later in the day, he’d been able to get the document, but still had no idea when his hearing would be.

Many other families faced similar situations Thursday, according to Lynch, taking time off work or pulling their kids out of school to show up for a nonexistent hearing. “It’s quite troublesome,” Lynch says. “Immigrants are traveling hundreds of miles to show up for a scheduled court date because no one wants to face the severe consequence of being ordered deported because they were absent…It’s disruptive for these individuals’ lives. What’s really concerning is the anxiety of not knowing what this means for their case.”

In an emailed statement, the DOJ’s Executive Office for Immigration Review said it was “unable to proceed with hearings for some respondents who believed they had hearings scheduled on that date. In some cases, the cases had been rescheduled to another date, but the lapse in appropriations prevented the immigration courts from issuing new hearing notices far enough in advance of the prior hearing date. In other cases, EOIR did not receive the Notice to Appear (NTA) in a timely manner.”

EOIR also said that because of recent changes to the agency’s scheduling system, the agency “does not expect any further recurrence of this type of situation.”