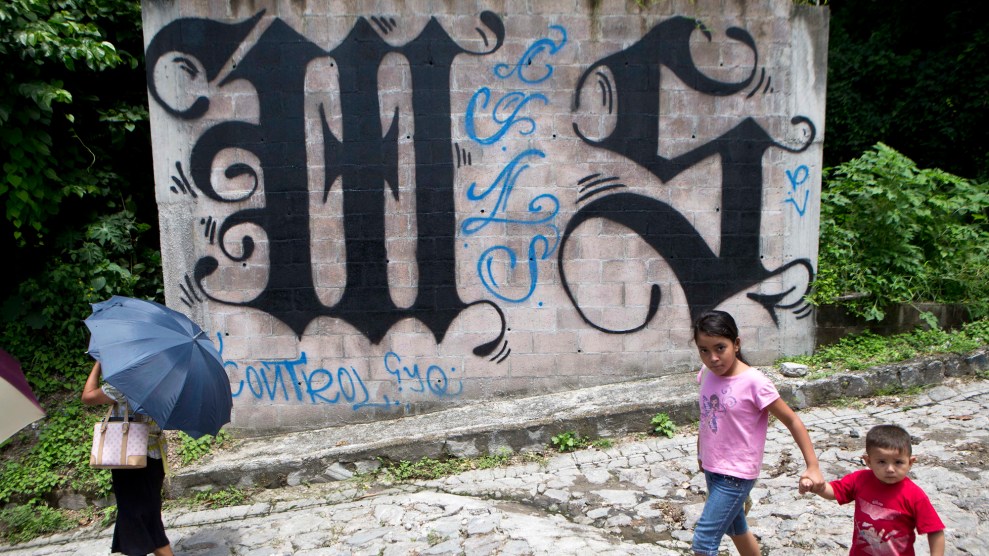 A family walks by a wall covered by a symbol from the Mara Salvatrucha, of MS-13 gang in Ilopango, El Salvador. Esteban Felix/AP

This story was originally co-published by ProPublica and New York magazine.

Henry was twice forced to join the brutal gang MS-13, first in El Salvador and then on Long Island. Twice, he tried to escape its violence. He became an informant, helping law enforcement arrest other MS-13 members.

But his FBI gang task force handler broke a promise to help him, and immigration authorities revealed his identity, as we reported last year. This month, Henry was deported to El Salvador, despite warnings that MS-13 members there would hunt him down and kill him. He’s now gone into hiding.

In an unusually emotional decision, a copy of which was recently obtained by ProPublica, an immigration judge, Thomas Mulligan, wrote that he was “very sympathetic” to Henry and found the 19-year-old’s testimony “truthful.” Nevertheless, Mulligan ruled that he had no choice but to deport him under U.S. and international law, because Henry had admitted to participating, albeit under duress, in two MS-13 murders when he was 12 years old, and because his chances of being tortured in El Salvador were less than 50 percent.

Henry “had a very difficult childhood and was roped into a gang life from a very young age,” Mulligan wrote in his Nov. 27 decision. Yet the court “does not have the discretionary authority to take such humanitarian factors into its consideration.”

His deportation illustrates how hard it has become for immigrants fleeing MS-13 to find asylum in the U.S., even if they have shown a commitment to helping law enforcement. A new Trump administration directive that immigrants targeted by gangs should not be granted special status has increased the odds against them. Run by the U.S. Department of Justice, immigration courts are required to follow its guidance.

Issued in June 2018, while Henry was in detention, this guidance “flavors the whole ruling” in his case, said Lenni Benson, who teaches immigration law at the New York Law School and reviewed Mulligan’s decision.

“I do believe he would be killed.”

She said the judge could have granted Henry asylum if he believed there were mitigating factors in the murders. The U.S. has allowed child soldiers who committed serious crimes under duress to stay in the country, she said. “In U.S. law, for a child to have culpability as an adult, you generally have to be over the age of 14,” she said. “What’s important is that the judge says, ‘I do believe you.'”

Henry, whose last name is being withheld for his safety, was raised by his grandmother in El Salvador after his parents moved to the U.S. when he was a small child. He was recruited into MS-13, which enlisted him on the condition that he kill a rival gang member. Henry held a gun while an older MS-13 member put his hand over Henry’s and pulled the trigger. Soon after, he helped kill a man with a machete, on the instructions of a gang leader who threatened to kill him if he didn’t obey. “He was pressured into killing two individuals when he was only twelve years old and was forced to witness many other forms of violence and cruelty that would be extremely traumatizing for any human being,” Mulligan wrote.

Henry vowed to break with the gang and came to live with his mother on Long Island when he was 15. But there were MS-13 members on Long Island, too. They recognized Henry and reminded him that gang membership is binding until death. Fearing for his life, he rejoined.

In desperation, Henry wrote a letter to his English teacher, describing his gang history, his constant fear and his yearning for a fresh start. A school-based police officer introduced him to Angel Rivera, a Suffolk County homicide detective assigned to the FBI’s Long Island Gang Task Force. Believing authorities would help him start a new life, Henry provided information about other MS-13 members.

Despite Henry’s cooperation, police turned his file over to Immigration and Customs Enforcement. ICE detained him, identified him in a document as an informant and jailed him alongside those he informed on. The Department of Homeland Security’s Office for Civil Rights and Civil Liberties is conducting an ongoing investigation into ICE’s treatment of Henry.

Mulligan criticized Rivera for “mistakenly” assuring Henry that he would help him. “This was poor police work and misled” Henry, he wrote. At the hearing, Rivera said Henry had indeed been trying to leave the gang, but the information he gave was not very useful. Rivera did not respond to requests for comment.

Asylum hearings often take less than an hour, but Henry’s lasted for six sessions over seven months. The school police officer, George Politis, testified that if MS-13 found out what Henry had done, “I do believe he would be killed.” Henry’s English teacher and a school administrator testified that he had sought their help.

ICE portrayed Henry as a danger to the community who was only pretending to cooperate with law enforcement. Under questioning by an ICE lawyer, Henry testified at length about a dozen murders he witnessed in El Salvador, including one person being fed alive into a wood chipper. He described watching the gang torture a member-turned-informant by pulling out his fingernails. “He started screaming for us to kill him, because the pain was too much,” Henry said in a whisper in the courtroom.

“It’s unusual to see that level of sympathy expressed while also denying everything. I would be very optimistic about that appeal.”

Mulligan was unconvinced by ICE’s arguments. He found Henry “generally credible” and his desire to leave the gang “believable.” However, he said that under U.S. law, a person who has committed a serious crime cannot receive asylum, and so Henry was disqualified by the two murders in El Salvador.

Henry had also asked to stay in this country under the 1987 United Nations Convention Against Torture. The treaty, which the U.S. has signed, bans deporting people who are “more likely than not” to be tortured if they returned home.

Mulligan said Henry’s fears of being tortured in El Salvador by MS-13 or police death squads were understandable. Still, he said, the Salvadoran government is making progress against gangs and extrajudicial killings, and so Henry did not prove the probability of torture.

After the judge ruled against him, Henry had to decide whether to accept deportation. Immigration law experts said that an appeal might well have succeeded.

“It’s unusual to see that level of sympathy expressed while also denying everything. I would be very optimistic about that appeal,” said Heather Axford, supervising staff attorney at Central American Legal Assistance. Axford said she has gotten several similar cases reversed in federal courts.

Henry’s family encouraged him to stay and fight, because they worried that his return to El Salvador would endanger not only him but his relatives, since MS-13 has been known to target families who shelter snitches. But an appeal would have taken years, and Henry felt his life was at risk in his New Jersey detention center. He said gang members detained there were becoming increasingly adamant that they knew he was an informant, and a friend on Long Island and relatives in El Salvador received threats.

Henry’s health was also deteriorating. In the gang, his nickname had been “Triste,” Spanish for “sad.” In recent months, the jail guards gave him a new nickname, “Skinny.” Two of his asylum hearings were postponed because he was ill. Henry took up yoga to try to deal with his mounting anxiety and worked a night shift in the jail kitchen because he was afraid to sleep in the dark with gang members around him.

In the end, Henry accepted the ruling and on Jan. 10, he was deported. His lawyer, Bryan Johnson, arranged for a team to meet him at the airport in El Salvador and get him to Europe. “Henry ended up a refugee of both El Salvador and the United States,” Johnson said. Out of concern for Henry’s safety, ProPublica held this story until he left El Salvador.

Drawing on tens of thousands of dollars donated by readers to a fund created by Johnson, Henry is now setting up a new life in a European city, where he is seeking asylum. He plans to work during the day and to finish high school. He said he was grateful to readers for allowing him to create a makeshift witness protection system for himself. “I have broken with the gang forever now, that’s one good thing to have come of all this,” he said. “I hope I helped people see how hard it is to make that kind of change. You never know what’s going to happen, but the important part is to try.”