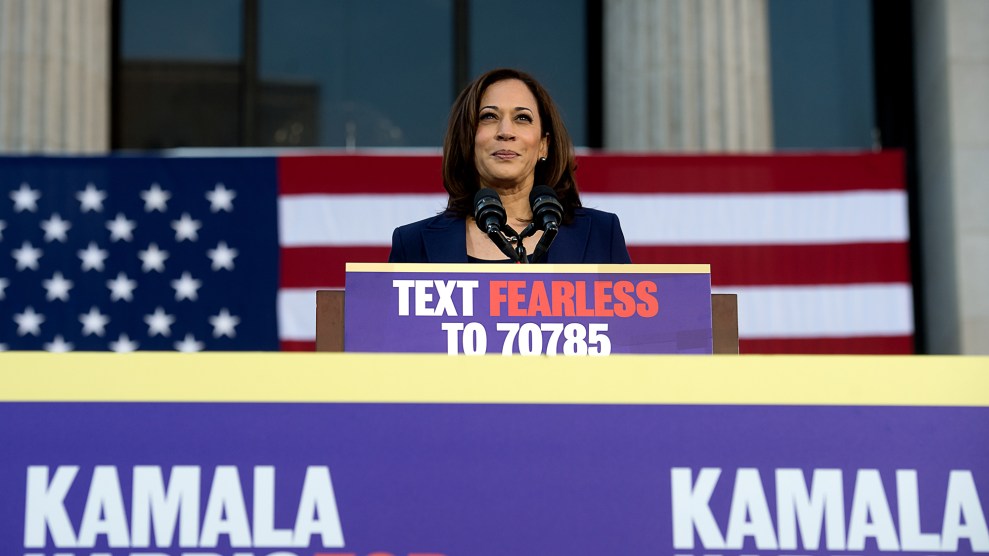 Sen. Kamala Harris (D-Calif.) kicks off her 2020 presidential campaign with a rally in Oakland on January 27.Paul Kitagaki Jr./ZUMA

Two days after announcing her candidacy for president last week, Sen. Kamala Harris of California appeared on MSNBC’s Rachel Maddow Show to make her case. Maddow brought up an issue she predicted would become a “central debate for the country” if Harris becomes the Democratic nominee. “The president is an enthusiastic proponent of the death penalty,” Maddow said. Harris, by contrast, had a career-defining moment when she declined to seek the death penalty against a man who had slain a police officer. Harris said she would welcome the debate and launched into a takedown of capital punishment in America.

“I’ve been [opposed] my entire life and still am, for very good reasons,” Harris told Maddow. She added, “We are talking about a system that creates a final punishment without any requirement that there be DNA to prove it…It is a system where it has been fundamentally proven to be applied to African American and Latino men and poor men disproportionately for the same kind of crime.”

But Harris’ record on the death penalty as a career prosecutor in California is somewhat more complicated. And it could expose her to attacks from the right and the left. In a general election, in which a narrow majority of the electorate supports capital punishment, President Donald Trump will undoubtedly point to her expressed opposition to capital punishment and declare her soft on crime. But in a Democratic primary, with a majority of voters opposing the death penalty, her history of not always coming down against the death penalty may give progressives pause.

Early in her career in government, Harris took a stand against capital punishment. In 2003, when she ran for San Francisco district attorney, she campaigned on a promise not to impose the death penalty. It was a popular stance in the liberal city, where 70 percent of voters oppose capital punishment. Less than four months into her job, her promise was put to the test. A beloved young cop named Isaac Espinoza was gunned down by a gang member while on patrol in San Francisco. In California, it was unheard of not to seek the death penalty in a case where a police officer is the victim.

But three days later, Harris announced she would not seek the death penalty against the suspect. It was a lonely position. At Espinoza’s funeral at St. Mary’s Cathedral, with Harris in the front row, Democratic Sen. Dianne Feinstein called for the death penalty for Espinoza’s killer. Behind Harris, scores of mourning police officers rose to their feet and applauded. After the service, Feinstein commented that had she known Harris opposed the death penalty, she probably wouldn’t have endorsed her for district attorney. Harris’ mother sent her daughter a bouquet of white roses and a card that read, “Courage!”

There were “high-level elected Democrats who said the case should be taken away from me because I would not seek the death penalty,” Harris recounted to Maddow. “But I did what I believed was the right thing to do.” One of those critics was the state’s other Democratic senator at the time, Barbara Boxer. (Feinstein announced last year, as she ran for reelection to the Senate, that she now opposes the death penalty.)

In a Democratic primary, with a majority of voters opposing the death penalty, her track record may give progressives pause.

Espinoza’s killer was sentenced to life in prison, but the episode darkened Harris’ prospects for winning statewide office because she was a prosecutor who had lost the support of powerful law enforcement groups. “Our members never forgave Harris,” Gary Delagnes, president of the local police union at the time, told the New York Times Magazine in 2016. In 2010, when Harris ran for state attorney general, only one law enforcement group endorsed her. Republicans ran attack ads against her based on her decision in the Espinoza case. Harris promised that while she did not personally support the death penalty, she would enforce it as attorney general. She won the race by less than a percentage point.

Four years later, Harris found herself at another crossroads on the death penalty. This time, she took the path law enforcement favored. In July 2014, a federal judge ruled that California’s death penalty system was so dysfunctional that it had become unconstitutional. Of the 900 people sentenced to death since the state reinstated the death penalty in 1978, just 13 had been executed. More than 40 percent of the 748 prisoners on death row at the time of the decision had languished there for more than 19 years. This delay and uncertainty “violates the Eighth Amendment’s prohibition against cruel and unusual punishment,” the judge wrote.

The order applied only to the inmate who had filed the case, but experts predicted it could open the floodgates to petitions from more inmates in California and in other states where death row inmates faced long and uncertain delays.

But it could only set a precedent if it wasn’t struck down. It fell to Harris to decide whether to let the opinion stand or appeal it. The timing was tricky. She was up for reelection in four months, and after painstaking work had rebuilt relationships with law officer unions and even won some of their endorsements. Harris chose to appeal.

The appeal rested mainly on a technicality. But attacking the ruling also meant defending the state’s death penalty. “We do not believe that there is any evidence that the system is arbitrary or random,” Michael J. Mongan, a deputy solicitor general working under Harris, told a panel of appeals court judges. Harris won the appeal, and the death penalty was upheld in California as a result, where it remains in force today.

Harris had a duty as attorney general to defend the state’s laws, especially against what she saw as flawed rulings unlikely to withstand scrutiny on appeal. But there is precedent for attorneys general not to defend laws they find unconstitutional. Harris herself had exercised this discretion a year before when she declined to defend California’s Proposition 8, which had banned same-sex marriage in 2008.

As attorney general, Harris again had her anti-death-penalty stance tested in the case of Kevin Cooper. Cooper had been convicted of a 1983 quadruple homicide, but his legal team had pieced together significant evidence suggesting that Cooper, who is black, had been framed by the San Bernardino police department. That frame job, the lawyers alleged, had continued even after a white suspect had emerged. During Harris’ time as attorney general, Cooper’s legal team pushed for advanced DNA testing of the evidence, hopeful that it would exonerate him.

Harris could have arranged DNA testing, but she declined to do so. A 2015 report from the Inter-American Commission on Human Rights called for a review of the case, finding that misconduct at Cooper’s trial had violated his constitutional rights. But Harris didn’t budge. In February 2016, Cooper’s legal team submitted a 235-page petition for clemency that asked for new testing and for evidence that the San Bernardino Sheriff’s Department had withheld from Cooper’s defense team for 33 years. A month later, the head of the American Bar Association called for clemency for Cooper, writing in a letter to the governor that “Cooper’s arrest, prosecution and conviction are marred by evidence of racial bias, police misconduct, evidence tampering, suppression of exculpatory information, lack of quality defense counsel and a hamstrung court system.” Again, Harris took no action, leaving Cooper on death row.

The case—like many potential wrongful conviction cases—put Harris in the awkward position of choosing to side with a convicted felon or law enforcement. Asking for a DNA review would have meant taking on a police department after working hard to mend relations with law enforcement. It wasn’t until a May 2018 New York Times exposé by columnist Nicholas Kristof about the case went viral that Harris, by then a US senator, called for new DNA testing in the case. “I feel awful about this,” Harris told Kristof. In December, outgoing California Gov. Jerry Brown ordered some but not all of the DNA tests Cooper had requested. This month, Cooper asked the new governor, Gavin Newsom, for a more substantial investigation.

The death penalty has been a knotty issue for Harris as an elected official. As district attorney and attorney general, she had to do more than just express an opinion on this often contentious matter. Last week, she told Maddow that she welcomes a debate about it. At this point, she may not have a choice.