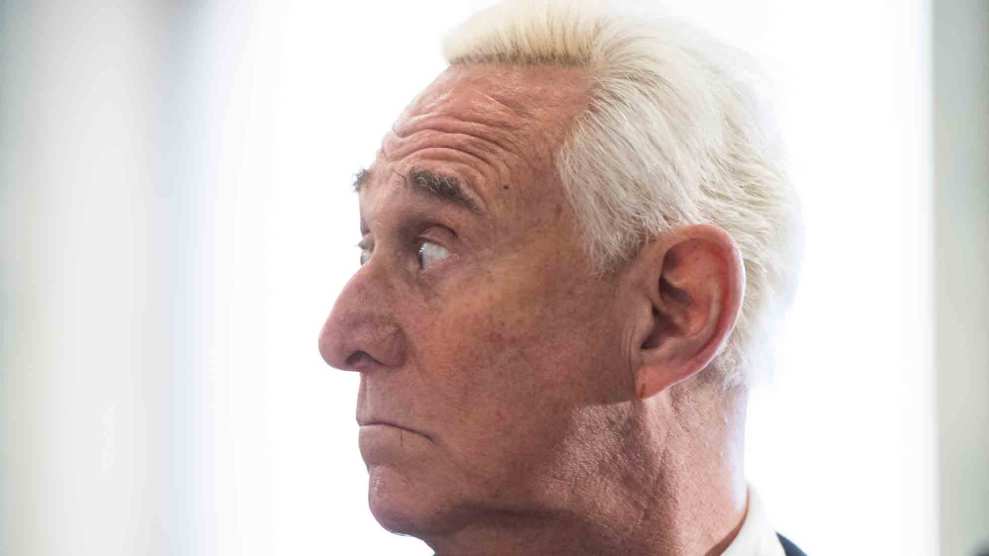 The charges against Stone, who was arrested at his Fort Lauderdale home early Friday morning by a phalanx of FBI agents, center on his efforts to obstruct congressional inquiries into Russian interference in the 2016 election. But the most significant part of the filing may be the revelation that Stone kept the Trump campaign up to speed based on what he said was inside knowledge of WikiLeaks’ plans to release hacked documents that would harm the Clinton campaign. In his written response to questions from Mueller, Trump reportedly denied that Stone had told him anything about WikiLeaks.

Stone was “contacted by senior Trump Campaign officials to inquire about future releases by” WikiLeaks.

The Stone indictment contends that starting “in or around June and July 2016” Stone informed the Trump campaign that WikiLeaks possessed documents that could be used as ammunition against Clinton. Stone “spoke to senior Trump Campaign officials about” WikiLeaks “and information it might have had that would be damaging to the Clinton Campaign,” Mueller alleges, noting that Stone was also “contacted by senior Trump Campaign officials to inquire about future releases by” WikiLeaks. The New York Times has reported that Stone traded emails with Trump campaign chairman Steve Bannon in October 2016 concerning a press conference by Julian Assange, during which many expected the WikiLeaks founder to announce the release of Clinton documents. The indictment suggests that, in addition to Bannon, other high-level campaign officials were in contact with Stone about WikiLeaks. And it contends that, after WikiLeaks July 22, 2016 release of records hacked from the Democratic National Committee, “a senior Trump Campaign official was directed to contact Stone about any additional releases and what other damaging information [WikiLeaks] had regarding the Clinton Campaign.” This raises the obvious question of who told the campaign staffer to reach out to Stone.

“Our Committee will be eager to learn just who directed a senior campaign official to contact Stone about additional damaging information held by Wikileaks, one of the publishing arms of Russian government hackers,” Rep. Adam Schiff (D-Calif.), the chairman of the House Intelligence Committee, said in a statement.

Listen to D.C. bureau chief David Corn and foreign influence reporter Dan Friedman explain Mueller’s latest indictment, and what it might mean for President Trump, on this breaking news edition of the Mother Jones Podcast:

According to the indictment, after WikiLeaks’ October 7, 2017, release of a batch of emails obtained from the account of Clinton campaign chairman John Podesta, an “associate” of a high-ranking Trump campaign official sent Stone a congratulatory text message: “well done.” The indictment says that in “subsequent conversations with senior Trump Campaign officials, Stone claimed credit for having correctly predicted the October 7, 2016 release.”

Mueller alleges that Stone lied repeatedly during his September 26, 2017, testimony before the House Intelligence Committee and in written communications with the panel, including by denying that he had any records relevant to its investigation into links between the Trump campaign and Russia. The indictment also charges Stone with witness tampering in connection with his repeated efforts to influence the testimony of Randy Credico, the former radio host and liberal activist who Stone has claimed served as his “back-channel” to WikiLeaks. The indictment explains that Stone lied to the committee by claiming to have obtained from Credico information he actually received from another person he relied on to reach WikiLeaks founder Julian Assange: right-wing conspiracy theorist Jerome Corsi.

Stone told the intelligence committee that Credico was his source for a series of tweets in August 2016 that seemed to correctly predict WikiLeaks’ plans. But the indictment notes that it was Corsi, not Credico, who told Stone in advance of those tweets that “[w]ord is friend in embassy plans 2 more dumps,” including one in October.

“At no time did Stone identify Corsi” to the committee “as another individual Stone contacted to serve as a ‘go-between,’ ‘intermediary,’ or other source of information'” from WikiLeaks, prosecutors note.

The indictment reveals other apparent attempts by Stone to mislead the committee. For example, he repeatedly claimed in his testimony that he had not exchanged text messages or emails with Credico; in fact, Stone had texted and emailed extensively with Credico. Last fall, despite having denied under oath that any such messages existed, the Republican operative and self-professed political dirty trickster released months’ worth of texts with Credico related to WikiLeaks, claiming the messages supported his claims that Credico was his WikiLeaks source.

Having misled the committee in his testimony, the indictment says, Stone worked to hide his lies by pressuring Credico to either back up his story or “withhold pertinent information from the investigations.” According to Muller, Stone “engaged in a prolonged effort to prevent” Credico “from contradicting Stone’s false statements to” the House intelligence committee. As Mother Jones has reported—and Mueller has alleged in Stone’s indictment—after Credico was asked to testify before the intelligence committee, Stone urged him to invoke his Fifth Amendment rights. In one case, the Republican operative, who cut his teeth working for former President Richard Nixon and who has a tattoo of the 37th president on his back, told Credico in a text: “‘Stonewall it. Plead the fifth. Anything to save the plan’…Richard Nixon.”

According to the indictment, Stone on various occasions told Credico he should do a “Frank Pentangeli” before the House intelligence committee to “avoid contradicting Stone’s testimony.” The indictment continues, clarifying that “Pentangeli is a character in the film The Godfather: Part II…who testifies before a congressional committee and in that testimony claims not to know critical information that he does in fact know.”

Credico, for his part, repeatedly urged Stone to correct his testimony. Last May, according to Stone’s indictment, Credico emailed Stone: “You should have just been honest with the house Intel committee…you’ve opened yourself up to perjury charges like an idiot.”

Stone’s indictment should worry other witnesses who may have misled congressional investigators. Democrats on the House Intelligence Committee have said Stone is one of several witnesses they believe could face perjury charges based on their testimony. And Mueller has displayed a willingness to prosecute witnesses over such charges. In November, Trump’s former personal lawyer and fix, Michael Cohen, pleaded guilty to lying to Congress about Trump’s efforts to build a Trump Tower in Moscow during the 2016 presidential campaign.

“These prosecutions should make it abundantly clear that those who appear before congressional investigators and attempt to mislead us will be held to account,” Schiff said in his statement. “Neither we nor the Special Counsel will tolerate efforts by any person to impede any investigation into Russia’s interference in the 2016 election, nor to pressure a witness to withhold testimony from or mislead Congress.”

Rudy Giuliani, one of Trump’s lawyers, told the Washington Post on Friday that Stone’s alleged false statements were significant but said that the indictment, despite its revelations about Stone’s links to Trump’s 2016 campaign, does not implicate the president. “That’s not right, you shouldn’t do that,” Giuliani said. “But there is no evidence of anything else but false statements. The president is safe here.”

After posting $250,000 bond Friday, Stone addressed reporters outside the Fort Lauderdale courthouse where he was arraigned, flashing the iconic victory pose made famous by his political hero, Nixon. “The charges today relate in no way to Russian collusion, WikiLeaks collaboration, or any other illegal act in connection with the 2016 campaign,” he said. And he claimed any false statements he may have made in his congressional testimony “would be both immaterial and without intent.”

He called his prosecution politically motivated and maintained that he would not testify against President Trump. “There is no circumstance whatsoever under which I will bear false witness against the president, nor will I make up lies to ease the pressure on myself,” he said. “I look forward to being fully and completely vindicated.”

Stone’s remarks were partly drowned out by jeers and chants of “lock him up” by onlookers. Acknowledging the vitriol, the publicity-loving operative said: “The only thing worse than being talked about is not being talked about.”