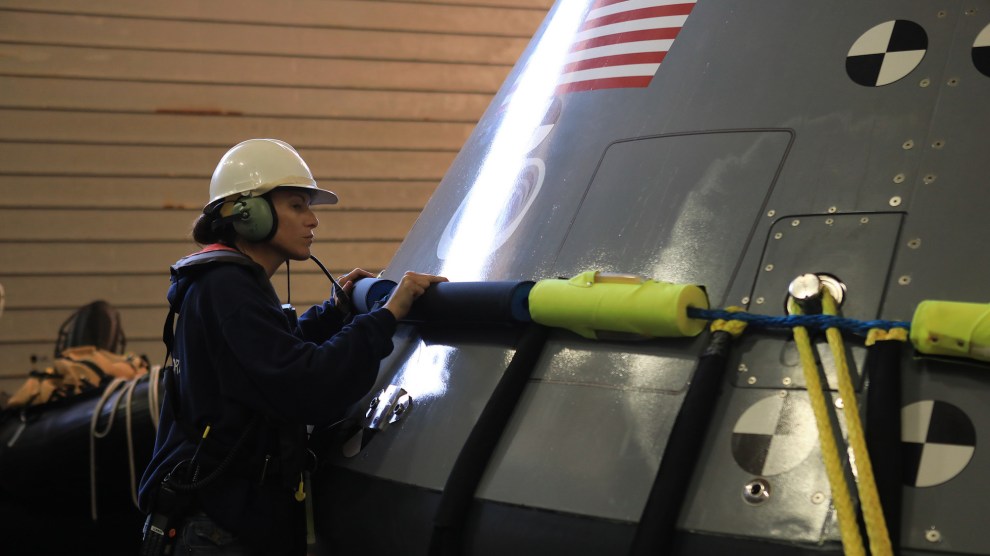 Thousands of NASA contractors are uncertain if they will get backpay.NASA/Kim Shiflett

Every day for five weeks, Michele Seeley, 45, and her husband, 62-year-old Wil Villegas, waited for the shutdown to end, hoping that they weren’t laid off in the meantime. Their children, ages two and four, were stuck watching cartoons instead of attending daycare at the Kennedy Space Center in Florida, where both Seeley and her husband have worked as contract environmental health specialists monitoring and enforcing safety conditions for over a decade. Seeley had thought about beginning to look for new work, though she knew doing so would mean giving up seniority in pay that she’s earned through her union.

Finally, President Donald Trump on Friday signed a bill to reopen the government for three weeks. Seeley’s children can now get back to their education and she and her husband can get back to work, but the damage the shutdown has done to her family’s finances is unlikely to be reversed. During the shutdown, they had to dip into savings they were putting toward buying a new home in order to pay their bills.

“So many of these individuals who have decent paying federal jobs are now at the doorstep of being destitute.”

While the federal employees who returned to work Monday received backpay for the 35 days the federal government was shut down, Americans like Seeley who work as contractors for federal agencies don’t have the same protections. Millions of contractors lost a month of paychecks, and legislation to get them backpay hasn’t made it out of committee in either the Senate or the House.

Seeley wasn’t alone. Steve Ching, vice president of the Machinists Union 2061, of which Seeley is a member, tells Mother Jones that during the shutdown, his phone was ringing nonstop with union members asking what to do during the shutdown. “So many of these individuals who have decent-paying federal jobs are now at the doorstep of being destitute,” he told Mother Jones before the shutdown ended. That economic precariousness remains.

Monday, on the first day back to work, Ching says that uncertainty about backpay has left workers tense. “There was a tremendous amount of questions from all the guys on the shop floor,” says Ching, who is a high-voltage technician in the operations maintenance department that runs the power grid for launch systems at the center. “‘Are we going to do this again in three weeks. Are we going to get paid?'”

The economic effects also rippled out to local employers and businesses around the Kennedy Space Center in Cape Canaveral, Florida. Ty Cobb, who owns C&R Electrical Construction Inc., told Mother Jones that his business hadn’t been that affected by the shutdown, but that it had been unable to sign any new NASA contracts, which make up about half of the company’s revenue. “Typically, the end of the year on government jobs, it gets a little slow. Normally they put bid packages out, and we haven’t seen them,” he said last week. He said his company actually took on a few workers from another company nearby that had to let go of workers. Seeley’s employer was set to lay off employees on Friday, a fate it narrowly avoided.

The Kennedy Space Center alone employs roughly 4,500 contractors and is a large driver of the local economy. (A small percentage of these contractors, including a number of custodians, have already received backpay from their employers.)

“It’s certainly a very important customer base,” says Clay Townsend, owner of Dixie Crossroads, a restaurant in Titusville, Florida. While he said the effect on his business wasn’t substantial, his sales were below what they were in January of last year. Townsend, a Democrat, called both of his Congress members but didn’t hear back from either. “I thought we were a government for the people, but I guess that’s not the case,” he says.

According to the Congressional Business Office, the shutdown cost the economy $11 billion, with $3 billion of that unrecoverable. The shutdown has also slowed projected economic growth for the year by a full 1 percent.

While NASA is back up and running—at least for the next three weeks, when government funding is set to expire once more unless a new spending deal is passed—the plight of contractors at the Kennedy Space Center shows that the reverberations from the shutdown are far from over. Even after Trump’s announcement on Friday, over 150 people showed up to a food drive and rally organized by Machinist Union International on Saturday.

For Seeley, if the government shuts down again, she will have few options besides just waiting it out. “You couldn’t just get another job and get it back,” she says.

In the meantime, the International Association of Machinists and Aerospace Workers, the union that represents Seeley and thousands of other federal workers, is continuing to demand backpay for contractors. “These contractors work side-by-side with their government counterparts, motivated by the same goals of public service and safety. They deserve to be treated the same as federal workers,” said Machinists Union International President Robert Martinez Jr. “Our members still have to deal with catching up on mortgages, student loans, school tuition, car loans, health care premiums, daycare and many other financial obligations.”

“For five weeks…that’s pretty much 10 percent of your annual income,” Ching says. “Some people might never recover from that. If we don’t get backpay, people are going to pick up and go and find a job that is more secure…the brain drain for this job is going to be tremendous.”