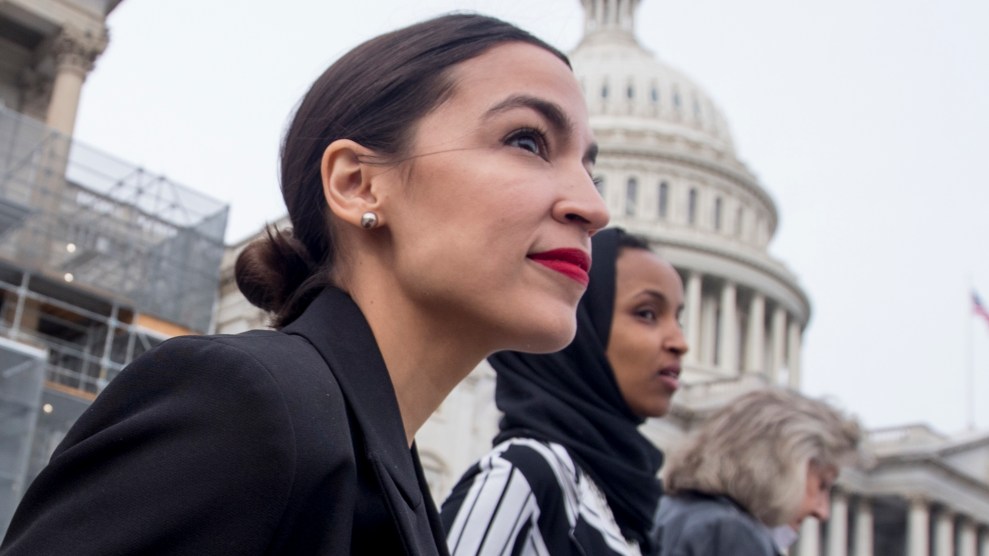 Rep. Alexandria Ocasio-Cortez (D-N.Y.) and Rep. Chellie Pingree (D-Maine) sent a letter to three of the nation’s biggest tech companies on Monday decrying their sponsorship of a conference this month that promoted climate change denial.

As Mother Jones reported last week, Google, Facebook, and Microsoft all sponsored LibertyCon, a libertarian student conference held in Washington, DC. The event featured a group called the CO2 Coalition, which handed out brochures in the exhibit hall that said its goal is to “explain how our lives and our planet Earth will be improved by additional atmospheric carbon dioxide.” One brochure claimed that “more carbon dioxide will help everyone, including future generations of our families” and that the “recent increase in CO2 levels has had a measurable, positive effect on plant life,” apparently because the greenhouse gas will make plants grow faster. The group also sponsored the conference and a talk titled “Let’s Talk About Not Talking: Should There Be ‘No Debate’ that Industrial Carbon Dioxide is Causing Climate Catastrophe?”

Ocasio-Cortez and Pingree, who are both making climate change a priority in the new Congress, were not pleased by the news. On Monday, they sent a letter to the CEOs of Google, Facebook, and Microsoft expressing their concern that the tech companies are contributing to the spread of misinformation about the reality of climate change despite their public commitment to reducing carbon emissions in their own operations.

Pingree says one of the reasons she and Ocasio-Cortez wrote this letter is that “climate change is clearly an all-hands-on-deck situation.” She adds, “Where I live in Maine, sea-level rise and warming is happening at a rate much faster than anyone ever anticipated.”

She says that the tech companies “claim by policy that they’re on board” with efforts to combat climate change, making their sponsorship of the conference all the more troubling. “The idea that they’re secretly working against it makes our job that much harder,” she says.

Pingree and Ocasio-Cortez wrote in their letter:

We understand that sponsorship of an event or conference is a common occurrence and that these sponsorships do not automatically indicate that the company endorses the variety of political viewpoints that may be presented at these events. However, given the magnitude and urgency of the climate crisis that we are now facing, we find it imperative to ensure that the climate-related views espoused at LibertyCon do not reflect the values of your companies going forward.

As you are well aware, the spreading of misinformation can be dangerous to our society. Today’s coordinated campaign to deny climate change, or to put a positive spin on its effects, is not unlike that of the tobacco companies which once sought to discredit their product’s link to cancer. Their propaganda kept the nation from addressing a public health crisis for years, leading to many preventable deaths. We cannot afford to make the same mistake again with climate change.