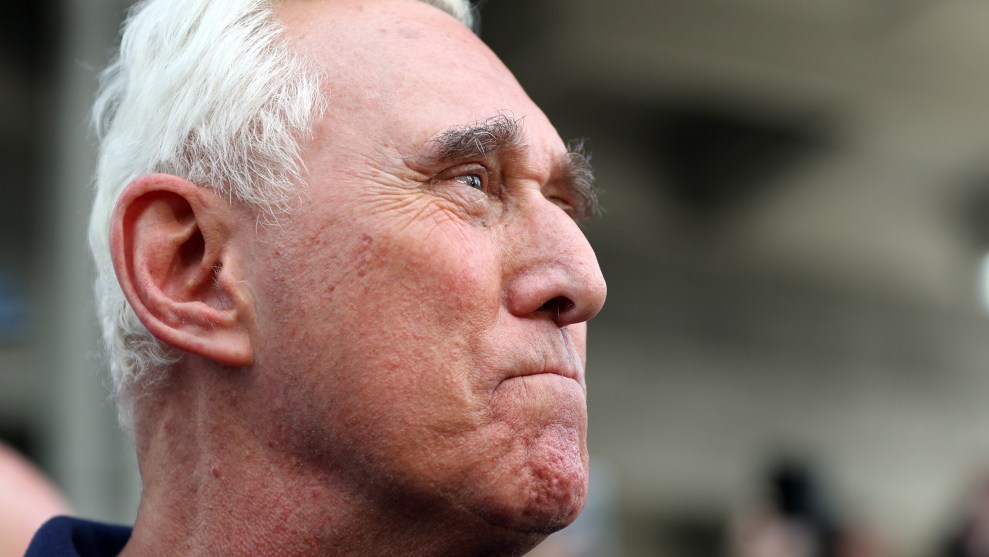 Longtime Trump adviser Roger Stone indicated on Sunday that he might be willing to cooperate with special counsel Robert Mueller after being charged Friday with obstruction, witness tampering, and lying to Congress amid Mueller’s investigation into Russian interference in the 2016 election.

Asked by ABC News anchor George Stephanopolous on “This Week” if there were any circumstances under which he’d cooperate, Stone replied: “That’s a question I would have to—I have to determine after my attorneys have some discussion.” He added, “If there’s wrongdoing by other people in the campaign—which I know of none, but if there is—I would certainly testify honestly.”

Stone, who has been conducting a media blitz criticizing Mueller’s tactics and reiterating his innocence since he was arrested, sounded a somewhat different theme during an interview with Fox News’ Tucker Carlson on Friday night, emphasizing that he would not “bear false witness” against Trump.

Yet, Trump seemed to begin distancing himself from Stone by Saturday evening, tweeting that Stone “didn’t even work for me anywhere near the Election!”

….about all of the one sided Fake Media coverage (collusion with Crooked H?) that I had to endure during my very successful presidential campaign. What about the now revealed bias by Facebook and many others. Roger Stone didn’t even work for me anywhere near the Election!

Other Fox News personalities aimed on Sunday to help minimize the latest developments in the Russia investigation. “Absolutely nobody cares” about the Mueller probe, declared Trump fanboy Pete Hegseth on “Fox & Friends.”

“Email us,” he went on. “Do you care about Russia? Have you ever been to Russia? Do you speak Russian?”

As his colleagues laughed and pushed back ever so slightly, he conceded: “Nobody watching this program cares.”

In which the Fox & Friends weekend crew declare that "no one watching this program cares" about Russia collusion, break down laughing. pic.twitter.com/2J5eeFIDl9