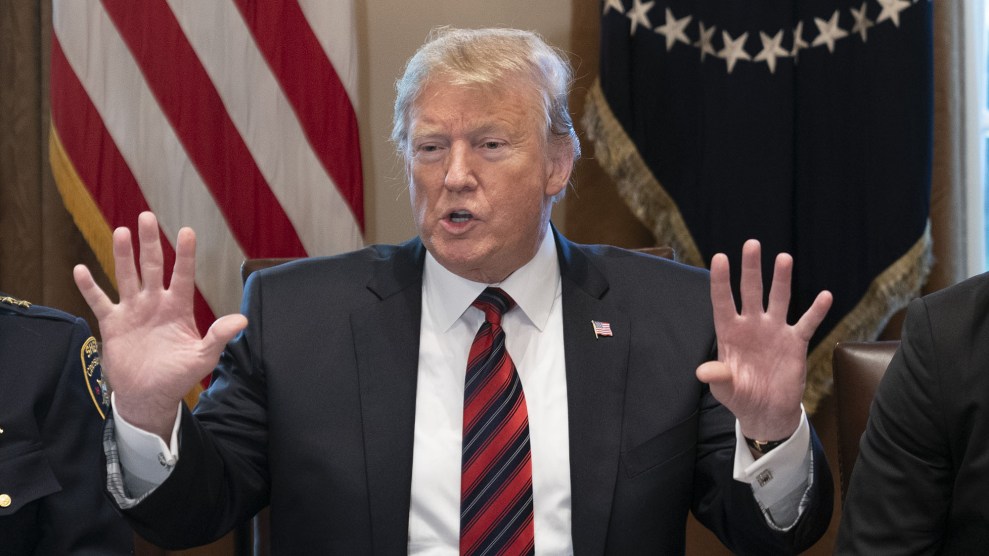 An irate President Donald Trump took to Twitter on Saturday to defend himself against a shocking New York Times report that the FBI opened an investigation in 2017 to determine whether the president was working on behalf of Russia.

Trump took aim at familiar targets—James Comey, Hillary Clinton, and Robert Mueller—portraying them as corrupt and in cahoots with each other. He also defended his own record on Russia, claiming (as if the Cold War never happened) that he has been “FAR tougher on Russia than Obama, Bush or Clinton. Maybe tougher than any other President.”

Wow, just learned in the Failing New York Times that the corrupt former leaders of the FBI, almost all fired or forced to leave the agency for some very bad reasons, opened up an investigation on me, for no reason & with no proof, after I fired Lyin’ James Comey, a total sleaze!

…Funny thing about James Comey. Everybody wanted him fired, Republican and Democrat alike. After the rigged & botched Crooked Hillary investigation, where she was interviewed on July 4th Weekend, not recorded or sworn in, and where she said she didn’t know anything (a lie),….

….the FBI was in complete turmoil (see N.Y. Post) because of Comey’s poor leadership and the way he handled the Clinton mess (not to mention his usurpation of powers from the Justice Department). My firing of James Comey was a great day for America. He was a Crooked Cop……

…..who is being totally protected by his best friend, Bob Mueller, & the 13 Angry Democrats – leaking machines who have NO interest in going after the Real Collusion (and much more) by Crooked Hillary Clinton, her Campaign, and the Democratic National Committee. Just Watch!

I have been FAR tougher on Russia than Obama, Bush or Clinton. Maybe tougher than any other President. At the same time, & as I have often said, getting along with Russia is a good thing, not a bad thing. I fully expect that someday we will have good relations with Russia again!

Lyin’ James Comey, Andrew McCabe, Peter S and his lover, agent Lisa Page, & more, all disgraced and/or fired and caught in the act. These are just some of the losers that tried to do a number on your President. Part of the Witch Hunt. Remember the “insurance policy?” This is it!

According to the Times, Trump’s own FBI opened a counter-intelligence investigation into whether he was working on behalf of Russia, and against the interests of the United States, after alarming behavior in May 2017 around the firing of Comey. When Mueller took over the Russia investigation that same month, he assumed this piece of it as well. Whether this area of the special counsel’s broader investigation remains open is unknown.

The investigation was prompted by circumstances surrounding Comey’s firing. The first was a letter that Trump drafted to Comey, which he never sent, in which he justified Comey’s firing and thanked Comey for confirming that Trump was not a subject of the Russia investigation. The second incident, according to the Times, was Trump’s NBC interview two days later in which he cited the Russia investigation as a reason to dismiss Comey. “When I decided to just do it, I said to myself—I said, you know, this Russia thing with Trump and Russia is a made-up story,” he said. “It’s an excuse by the Democrats for having lost an election that they should’ve won.”