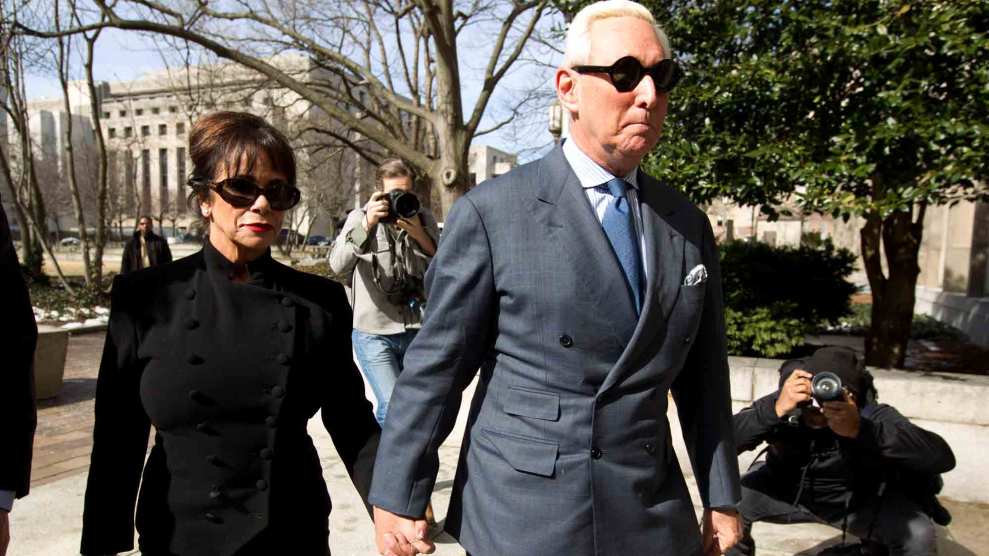 US District Judge Amy Berman Jackson slapped a strict gag order on Roger Stone on Thursday but stopped short of jailing him over an Instagram post showing what appeared to be a crosshairs next to Jackson’s head. “Any violation of this order will be a basis for revoking your bond,” she told the longtime adviser to President Donald Trump and self-professed dirty trickster.

Stone, who is awaiting trial on obstruction of justice and perjury charges brought by special counsel Robert Mueller, apologized profusely and repeatedly to Jackson on Thursday after his lawyer took the extraordinary step of putting Stone on the stand to defend his conduct.

Stone admitted he had “abused” an earlier order that Jackson issued which did not bar Stone from commenting publicly on the case as long as he avoided commenting within Washington, DC. “I let myself down,” Stone said. “I let my family down. I let my attorneys down. I can only say that I am sorry.”

But Stone drew Jackson’s ire with a series of statements that the judge said suggested he did not fully accept responsibility for his post.

Stone claimed his “stupid lapse of judgment” resulted from “emotional stress” due to his indictment. Stone also said he is under “extreme financial stress” because his legal issues have cut off the political consulting and other income he relies on. “I’m having trouble putting the food on the table,” he said.

Stone said that an apology filed under his name on the court’s docket had been drafted by his lawyers. “I did not write that,” he said, seeming to distance himself from the expression of contrition. “I signed it on the advice of my attorney.”

Stone said he believed that the image he posted on Instagram does not show a crosshairs but a “Celtic occult” symbol. Stone said that while he posted the image of Jackson, he did not find it. One of “five or six” volunteers who assist him with social media selected it, Stone said. “I just said, ‘Get a photo,'” Stone explained. “I am responsible for the posting. I just didn’t look at it. I did not review it properly.”

Under questioning, Stone said he could only recall the names of four of his volunteers, including blogger Jacob Engels, who has close ties to the far-right Proud Boys group. Stone said Engels had access to his phone on the day the post was made and had the ability to sign into his Instagram account. But Stone said none of his volunteers would admit to finding the image. (Engels, who attended the hearing, declined to tell Mother Jones if he had selected the image.)

Stone’s claims drew incredulity from Jackson. “Do your volunteers know how to do a Google search?” she asked. “How hard was it to come up with a photograph that didn’t have a crosshairs in it?”

“You cannot remember the names of all the people who were working for you four days ago?” Jonathan Kravis, a prosecutor in the US attorney’s office in Washington, asked during a cross-examination. “Correct,” Stone said. “You cannot remember all the names of people who had access to your cellphone four days ago?” Kravis asked. “Correct,” Stone responded.

“I would submit that the defendant’s testimony at this hearing was not credible,” Kravis said later.

Jackson concurred, offering a withering explanation for her decision to bar Stone from public comment on the case. “The apology rings quite hollow,” she said.

Jackson ruled that Stone had posted the Instagram image with the intent of denigrating the court’s proceeding and tainting the jury pool in the case. She modified her order on media contact so that Stone’s bond will be revoked if he violates the new order. “From this moment on the defendant may not speak publicly about the investigation of this case,” she said.

Jackson cited Stone’s lawyers’ argument that he should not be gagged because he is a professional communicator and, as they put it, “a voice.”

“Roger Stone fully understands the power of words and the power of symbols,” she said. “There’s nothing ambiguous about crosshairs.”